The Tunguska Event: A Cataclysmic Detonation Over Siberia 1908

On the morning of June 8, 1908, a man was sitting on the porch of the trading post in Vanavara, Russia, when a searing blast threw him off his chair. Forty miles away near the Podkamennaya Tunguska River, a 220 million pound asteroid had hurtled into the earth’s atmosphere at 33,500 miles per hour and detonated in the sky with cataclysmic force above Siberia. The resulting shock wave flattened 80 million trees over 500,000 acres. Initially, the Tunguska event was a mystery. But throughout the years, scientists have been studying the blast that caused shockwaves as far as Britain, and today, we have a better picture of what occurred on that day. 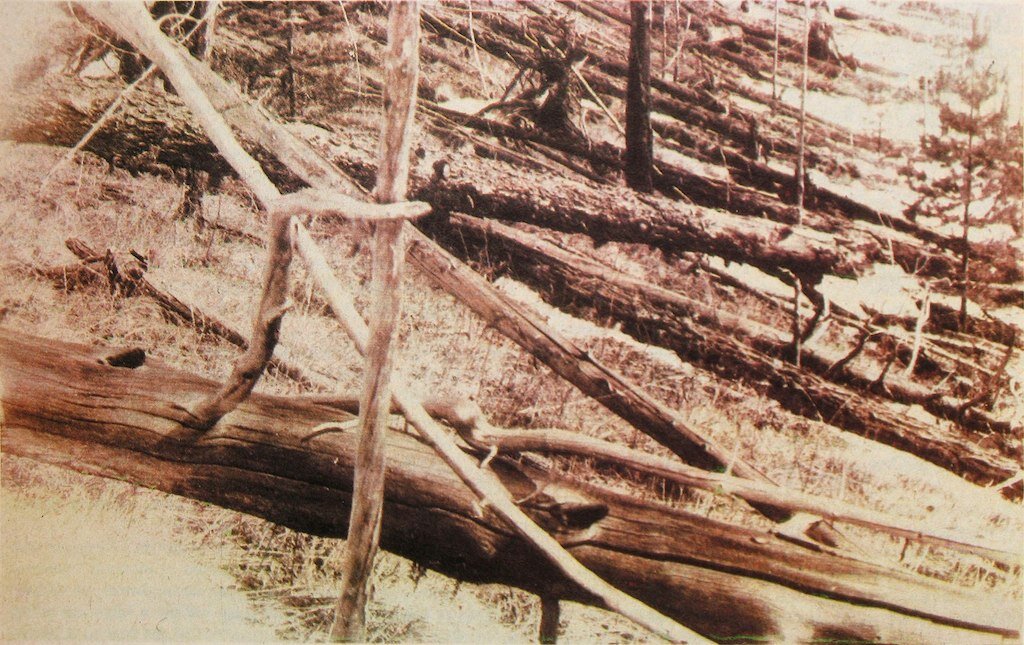 Leonid Kulik’s photo from his 1929 expedition to the Tunguska site.

Reports indicated that the light generated from the event was so bright, people could read outdoors at midnight in Asia. Scientists estimate that the force of the explosion equaled 185 atomic bombs of the type detonated during World War II over Hiroshima, Japan, in 1945. David Morrison, a planetary researcher at Ames, indicates that the cataclysm was the largest natural cataclysmic event that modern humans have ever seen and is the type that we must guard ourselves against if it happens again (Smith). 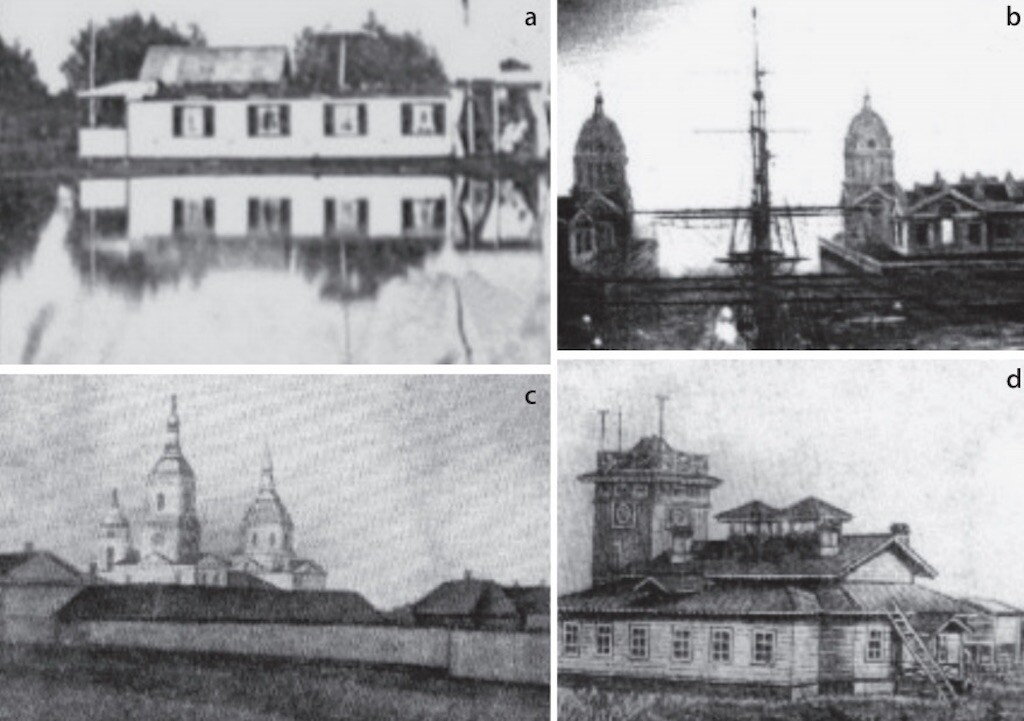 The sky was split in two, and high above the forest the whole northern part of the sky appeared covered with fire. [There] was a bang in the sky and a mighty crash . . . followed by a noise like stones falling from the sky, or of guns firing.

The Tunguska event occurred near the Podkamennaya River in Russia’s central Siberia. As far as researchers know, there were few or no people in the vicinity of ground zero that June day in 1908. However,  the heat was so intense, the man who flew from his chair said it felt like his shirt was afire.

Scientists do not know for sure if there were any casualties in the event, but there is no evidence of it. However, the blast killed hundreds of reindeer that local herders depended on for their livelihood.

The site is so remote and the political scene in Russia was in such turmoil, no scientist even attempted to go there until 1921. However, in 13 years, many changes to the landscape can take place. Leonid Kulik, of the St. Petersburg Museum’s meteorite collection, led that 1921 expedition, but they failed to reach the area.

Kulik made three attempts and finally got there in 1927. Nonetheless, the team found no physical evidence. There was no crater, no meteor fragments, and no photos to help. Without concrete information, speculations went wild. If the space object was rock or iron, there should be some remnants of it. However, comets consist primarily of ice. Therefore, in that case, nothing would have remained.

Most of the trees were their sides in a radial pattern. However, near the epicenter, the trees did not fall. Instead, the blast stripped off their branches and bark, and they pointed away from the epicenter. It is common during fast-moving shock waves, that tree limbs and bark break off before the branches transfer impact momentum to the trunk of the tree. People observed similar debranching at Hiroshima 37 years after the Siberian catatrophe.

When the team tried to ask the locals if they had seen or heard anything, the met with an unexpected problem. People who believed that an angry god caused the disaster were reluctant to speak to Kulik’s team about the explosion. Their god Ogdy was known to kill animals and smash trees.

Some people disputed that the event was a meteorite. But today, the consensus among scientists is that an asteroid or comet entering the Earth’s atmosphere caused the explosion. Alternative theories have ranged:

In 1958, an expedition team to the detonation site found minuscule particles of magnetite and silicate in the soil. An analysis revealed that these remnants had a high nickel content. Nickel is a known characteristic of meteoric rocks. Further analysis in 2013 of rocks found in 1978 showed that the stones were of meteoric origin. As it turned out, scientists should have been searching for tiny particles, not big space rocks, at ground zero. But regardless of the new evidence, scientists speculated that particles found at around the impact zone could have been from other space rocks and other events in the distant past.

Lake Cheko, which is five miles away from the epicenter, may be the result of a chunk of the Siberian meteorite. The lake lies in the same trajectory as the blast. Additionally, several studies suggest that the age of the lake is consistent with the Tunguska event. Other studies prove that meteoric particles are nearby. However, a few studies to the contrary indicate the lake to be older than the event. 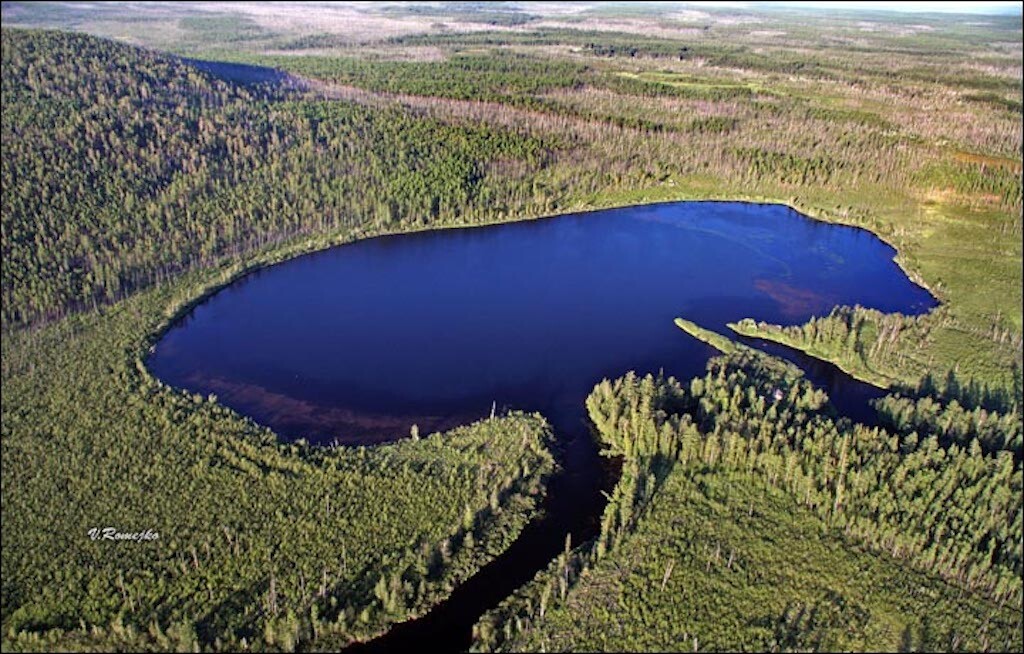 Scientists theorize that Lake Cheko may be the impact site of the Tunguska meteor. Image: V. Romejko

Patomskiy Crater: What Caused This Strange Thing in Siberia?

Characteristics of the Object

The intensity and brightness of the fire may not be surprising given the fact that the meteorite exploded and heated the air to 44,500 degrees Fahrenheit at an altitude of about 28,000 feet, according to reports. For many miles around, people witnessed a huge, apocalyptically bright fireball streaking rapidly across Russia’s skies. The object measured an estimated 120 feet across and entered the atmosphere at a speed of about 34,000 mph. For perspective, one floor of a building is about 10 feet, so the object was about as big as a 12-story building. 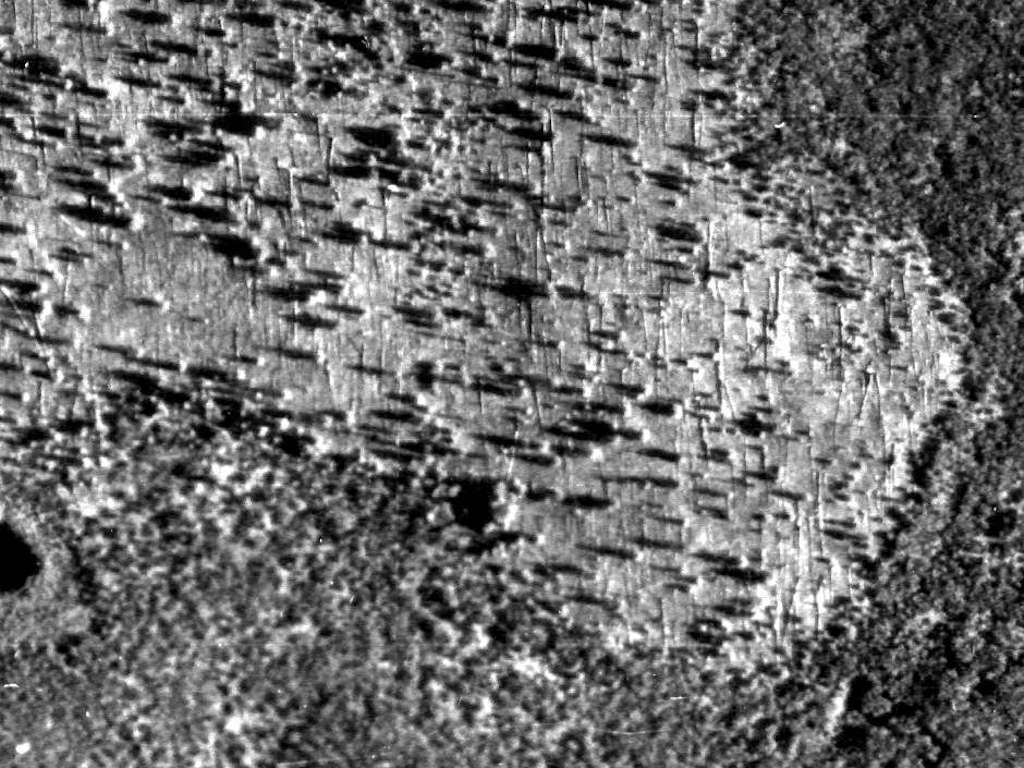 A 1938 photo of the area showing felled trees.

Another meteorite streaked across Russian skies in 2013. The Chelyabinsk event was more unfortunate because about 1,000 people sustained injuries from shattering glass. The 50-foot asteroid streaking in the air blew out windows, but Russians were lucky that it did not knock down buildings.

Invaders like the smaller, yet still harmful, meteorite in Chelyabinsk occur every 10 to 100 years, astronomers say. On the other hand, large-scale meteors like the one at Tunguska occur about once every 300 years. Scientists have studied the Chelyabinsk meteorite and created models about the Siberian impact based on the more recent event.

Perspective on the threat

Lorien Wheeler, a researcher with the NASA Ames Research Center’s Asteroid Threat Assessment Project, gave some perspective on the threat:

“Because there are so few observed cases, a lot of uncertainty remains about how large asteroids break up in the atmosphere and how much damage they could cause on the ground. However, recent advancements in computational models, along with analyses of the Chelyabinsk and other meteor events, are helping to improve our understanding of these factors so that we can better evaluate potential asteroid threats in the future.”

Luckily, most meteors that enter Earth’s atmosphere break apart and do not leave a crater or cause prolonged meteorological disruptions like years-long winter weather. An asteroid has to be huge to survive a journey through the atmosphere. The asteroid that experts believe killed off the dinosaurs 65 million years ago was around six miles wide and left a crater 110 miles across in what is now Yucatan, Mexico.

Whatever happened that day in Siberia, there was a huge detonation that could have caused so much more damage had it occurred in a populated area. Some people felt its effect, while many people witnessed the bizarre bright sky at night. Although a meteorite is the prevailing theory, some people still cling to other ideas of its cause. Nevertheless, the event continues to resonate within the scientific community today. Astronomers have marked Asteroid Day on June 30 to commemorate the Tunguska event.

The Story of Kennewick Man: From Discovery to...