by Shelly Barclay May 28, 2010
0
FacebookTwitterPinterestRedditEmail

Serial murders are one of the most terrifying things that can happen to a community. Knowing that there is someone stalking the streets that you live on, looking for victims, is a very scary prospect. Many of these serial killers strike in the same area for years, others move around spreading fear in new neighborhoods and luckily, many of them are caught. However, when the killer is not caught, citizens are forced to imagine when he or she will strike again. There is also sadness in knowing that the serial murderer was never brought to justice for the crimes they committed. Here are a few famous unsolved serial murders in the United States. 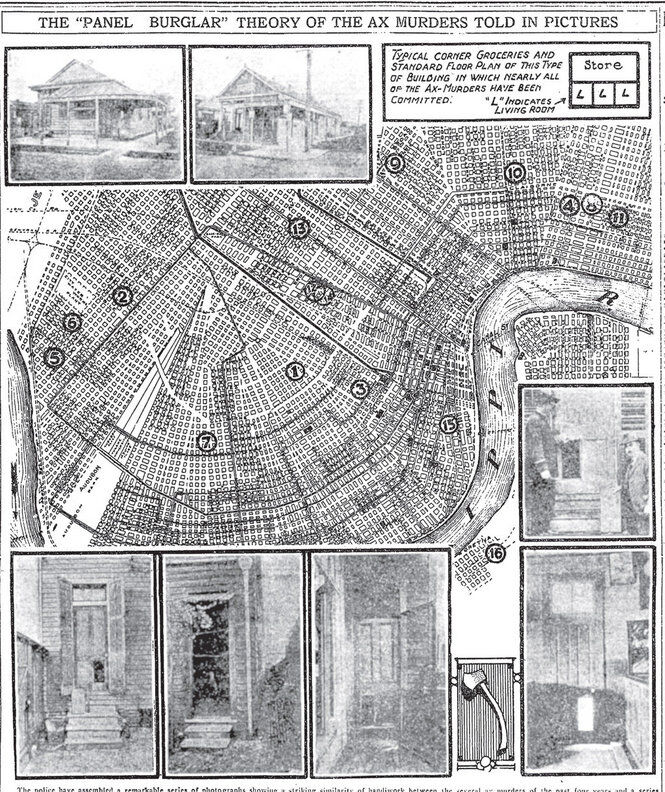 A map showing the location of the Axeman of New Orlean’s murders.

Oddly, the axe that was used was often the property of one of the victims. The murderer seemed to delight in confusing authorities. In fact, there were several instances where loved ones or neighbors were arrested for the murders. One man was even sentenced to death and his father sentenced to life in prison for an attack on their neighbors. They were later released after the women that had been attacked confessed that she had lied. No one was ever charged with all of the murders.

At times, many months would pass between killings and the residents of New Orleans would let down their guard, only to have the killer strike again. Then, the killings abruptly ceased in late 1919. There were eleven victims associated with the axeman in all. One was an infant. Five of these victims survived their attacks, though none could say who attacked them.

Over a span of fourteen years, women associated with the University of Wisconsin disappeared in and around Madison, Wisconsin and were found dead. The victims began turning up in 1968. The killings were sporadic. In many cases, the police could not identify the cause of death due to the decomposed state of some of the victims. There were often spaces of years between victims. Nonetheless, the killings are thought by many to be the work of a serial killer. 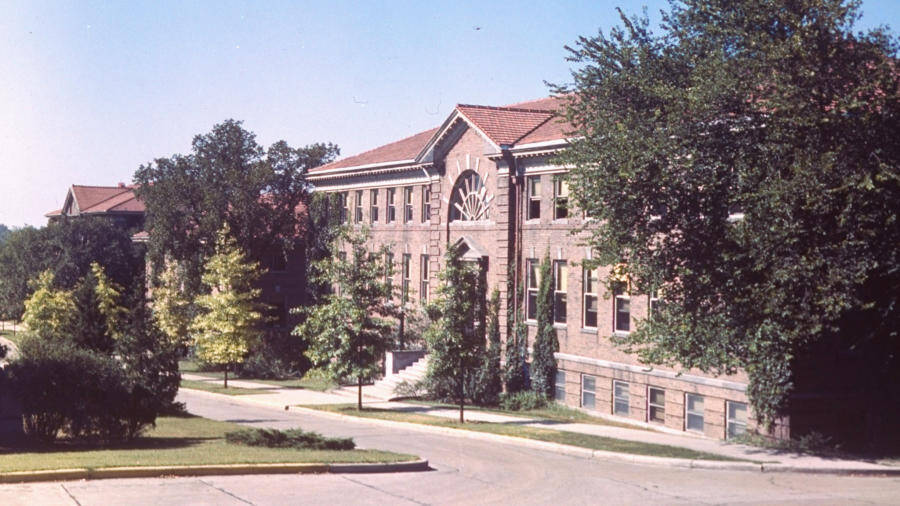 All of the victims were young women, between the ages of 17 and 24. In the cases where an autopsy was able to show a cause of death, the victims had been stabbed. The bodies were often left out of sight, so some of the women were not found until many days later. Of course, there is the possibility that some victims have never been found.

The killings in Madison stopped in November of 1984. There were seven victims in all. Each was a young woman with long hair. Their killer was never caught.

The first victim that is thought to be the work of the Frankford slasher was found in August of 1985. The North Philadelphia, PA, victims were all women, aged between 28-68. Most, if not all, of the victims were raped and found in various states of undress. One poor victim had been raped with a 3-ft. piece of wood. The cause of death was invariably stabbing. One of the victims had been stabbed 74 times.

At the same time these murders were being committed, police uncovered and arrested two other serial killers in the area. Oddly enough, the killings were not connected. The police were obviously very busy, but they followed up every lead they got in the slasher case.

A man was arrested for the killings in 1990. While he was awaiting trial, the final murder took place. The man stood trial anyway and was convicted of the killing of one of the victims. In all, there were seven victims.

If the man was truly guilty of the crime that meant that there must have been two killers with the same M.O., working in the area. Nonetheless, the killings stopped. Some believe that is because the killer is behind bars. Others believe that he is still out there somewhere.

The killings began in Austin on New Year’s Eve, 1884. In the beginning, the killer attacked servant girls and whoever was with them when he entered their cabins. It is assumed that he would enter the home and strike its occupants with an axe.

However, there were at least three cases where the killer used a different weapon. Once, he bludgeoned a woman with a brick, once he used a knife and once he stabbed an 11-year-old girl through the ears with an iron rod. Many of the female victims were raped and it soon became obvious that the people of Austin had a depraved maniac on their hands. 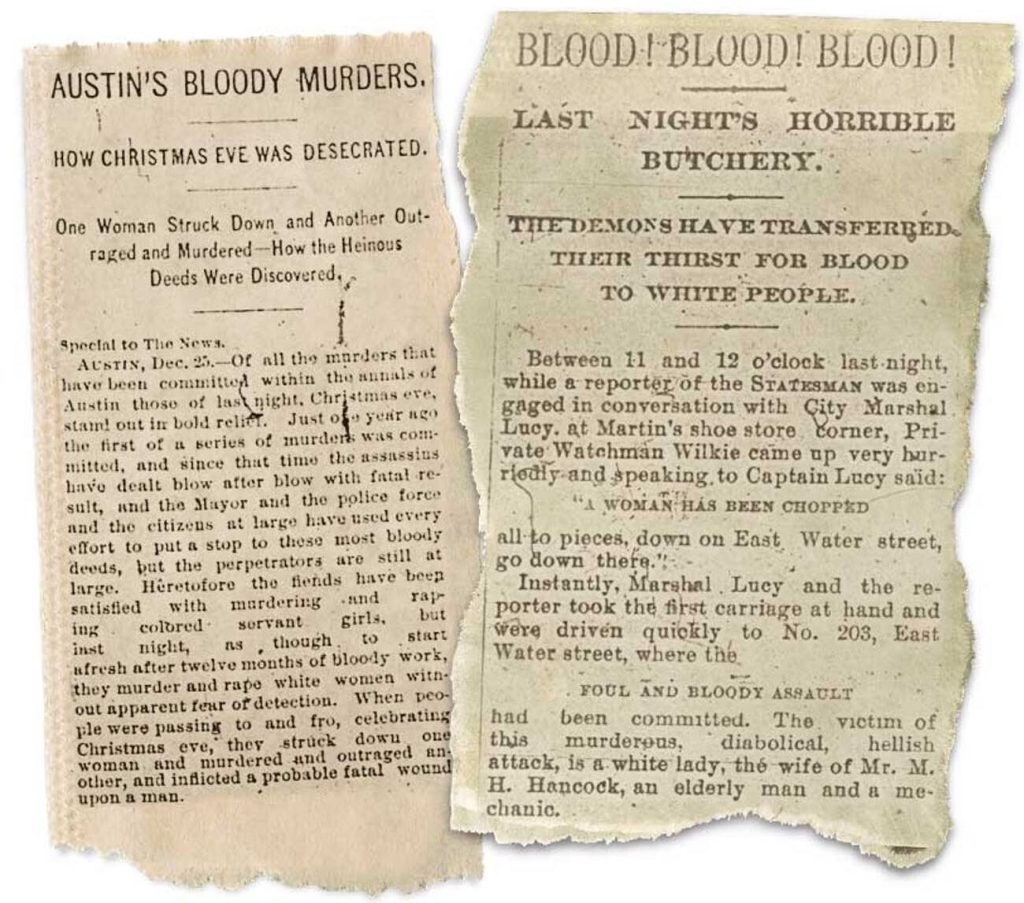 The residents of Austin were eager to have the killer apprehended, though many expressed relief that he had a thing for negro serving girls. All of that changed on the last night of the serial murders in Austin. The killer struck twice on Christmas Eve of 1885. Both times, he killed white women in their homes, killing them in the same brutal way that he had killed the others. The killings ceased after that night.

Seven women and one man were killed before the murders stopped. There were even more victims, but they survived. Some believe that the Servant Girl Annihilator went on to become Jack the Ripper. This is possible, due to the time frames and the brutal nature of the killings. However, the Servant Girl Annihilator clearly raped his victims, whereas Jack did not. The level of grotesque skill used by Jack was also lacking in the Austin murders.

Other famous unsolved serial murders in the U.S. include:

The Zodiac Killer, San Francisco, California, 1968-1973: Claims in letters to have killed 37 victims, however only seven are linked to him.

The Grim Sleeper, Los Angeles, California, 1985-present: At least eleven victims, the last of which was killed in 2007. Thought to be still at large and will likely strike again. Update: A suspect (likely the killer) has been arrested in the Grim Sleeper case. Please refer to the following link for more information. Lonnie David Franklin/Grim Sleeper.

No doubt, the fact that these killings are unsolved sends chills up your spine.

Serial murders can happen in any community, at any time. However, many serial murders have been solved and new technologies are helping the police identify these predators. You can protect yourself by being aware of what is happening in your community and by taking necessary precautions to avoid becoming a victim. Public awareness and cooperation with police are the most important things in these cases.

The Story of Ken McElroy and the Vigilantes...