In the late Victorian era, two prolific serial killers were in operation on either side of the Atlantic. At first glance, these murderers were very different people. But were they? America’s first serial killer was H.H. Holmes, who confessed to 27 murders and hanged in 1896. Jack the Ripper became history’s most infamous and brazen killer after he butchered 5 women in London in 1888. His identity remains a mystery. However, is it possible that H.H. Holmes and Jack the Ripper were the same person? The great-great-grandson of H.H. Holmes, attorney Jeff Mudgett, believes so. 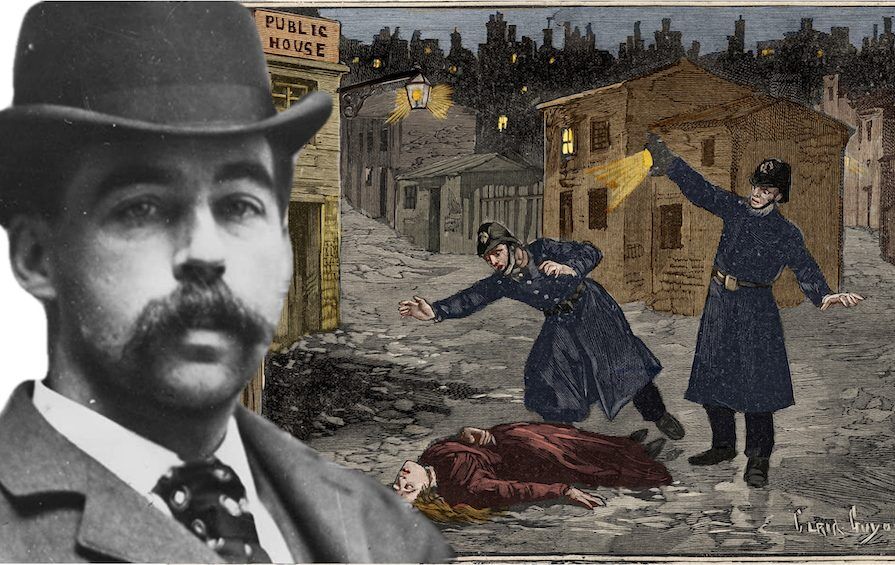 H.H. Holmes was murdering around the years that London’s Ripper operated. Could Holmes have been Jack the Ripper?

Jeff Mudgett wrote a memoir in 2011, Bloodstains, that connects Jack the Ripper and H.H. Holmes. Mudgett says that some time ago, he inherited a pair of diaries from his grandfather. Apparently, the diaries had come from Mudgett’s great-great-grandfather, Herman Webster Mudgett, alias, H.H. Holmes. Handwriting analysts confirmed that these diaries were written by Holmes. According to at least one of the diaries, he wrote that he was in London at the height of the Ripper killings. However, he was not alone. An acquaintance was apparently along for training sessions.

As one theory goes, this “apprentice” was tasked with finding random prostitutes and murdering them with excessive brutality. Nobody knows exactly why, but a theory is proposed later.

The History Channel’s 2017 American Ripper TV series discussed Mudgett’s suggestions that H.H. Holmes is Jack the Ripper. This was the essence of Jeff Mudgett’s entire debate.

I am the descendant of the Devil.

In the first episode of the TV show, former CIA operative Amaryllis Fox joined Mudgett’s investigation into the connection between Holmes and the Ripper. The duo did uncover evidence that both supports and contradicts Mudgett’s beliefs.

On the face of things, H.H. Holmes and Jack the Ripper appear as though they are radically different murderers. The popular image of Jack is that he prowled the streets of the East End with a knife in hand, ready at a moment’s notice. Whereas, Holmes was much more methodical and cunning. He worked mostly behind closed doors. However, as we look a little deeper into both, certain similarities surface.

Holmes had medical training in dissection and organ removal. He probably could take out organs in seconds even in the dark. Some investigators think the Ripper had even a modest medical knowledge. Mary Kelly, often considered the final canonical Ripper victim, was murdered indoors. Could this have been Holmes testing out assorted methods of murder? Or perhaps it was practice before he opened up Murder Castle — his World’s Fair Hotel in Chicago.

Holmes was a master of pre-meditated murder and sometimes spent many months scheming and planning his crimes. He was an entrepreneur and often killed his victims to sell their bodies for study or collect on their insurance policies. Often with painstaking effort, Holmes entered into lengthy relationships with people who he would later defraud and kill.

His hotel, dubbed the Murder Castle, originated in 1887. Construction, which started from the ground up, ended in 1892. The project was to be a money-making venture for Holmes in multiple ways. The ground level contained retail spaces. However, the rooms above had all sorts of entrapments for unwitting guests. For example, there were vents that piped in poisonous gases, asbestos-lined walls for noise control, and a solid metal vault where he kept some victims. 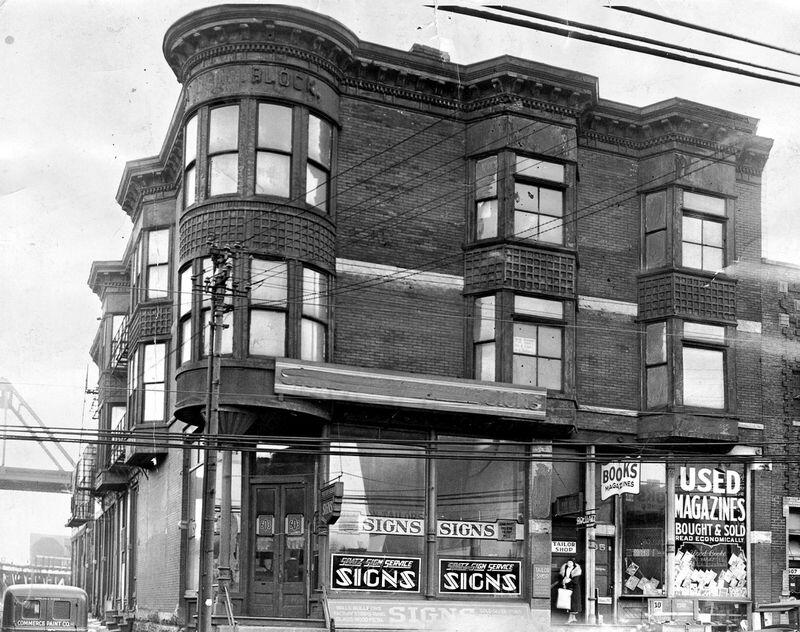 Holmes Murder Castle was at the corner of South Wallace and 63rd streets in Chicago. Image: Chicago Tribune.

Additionally, chutes ran down to the basement where Holmes would process the bodies in quicklime or incinerate them. Some of the skeletons went to medical schools for $200 each. Initially, Holmes’ motivation was greed. However, before he hanged, he admitted that he also murdered for enjoyment. When he reflected on his crimes, his evil viciousness shocked even him.

Jack the Ripper also planned his crimes carefully, contrary to popular belief, though not to the extent of Holmes. London’s police officers walked a very strict beat and had to be at a certain point at a certain time each shift. Jack seemed to know exactly when and where to strike when the officer was nowhere near. Then he had to find, subdue, and mutilate his victims quickly.

Jack the Ripper Was the First Celebrity Serial Killer

Contrary to Holmes, Jack could not have killed for insurance money, as all his poor victims probably had none. Additionally, he left most of the corpses in the streets. Therefore he wasn’t selling cadavers or skeletons. Jack’s motives appeared to be a deep-seated hatred of women. However, he may have been trying to cover up a different motive.

In August of 1888, Jack the Ripper killed his first victim, local prostitute Mary Ann Nichols. He sliced open her torso and disemboweled her, though he did not remove any organs. His second victim, Annie Chapman, was missing part of her uterus and bladder after he murdered her on Hanbury Street. With the fourth victim, Catherine Eddowes, he removed a kidney and her uterus.

Possible Motive for Jack the Ripper

Coroner Wynne Baxter, who examined Chapman, stated that the organs were the motive for the murders. Supposedly, the coroner was aware that an American was in town and that he had asked to purchase uteruses at the hefty price of 20 pounds each. Based on this theory, the mutilations and butchery of the victims were simply a smokescreen to hide the fact that Jack wanted organs. In other words, the American may not have purchased the organs had he know they came from innocent victims. Did Holmes somehow know that an American was in the market for uteruses?

“The medical schools had outright refused this American. . . . It was common knowledge throughout the medical community of London at the time that an American had made this highly unusual 20 pound offer, and the coroner at the Annie Chapman inquest knew it, and brought it up as the probable motive for the then current Whitechaple murders of 1888” (Douglas Barr, a commenter on whitechapeljack.com).

The British Medical Journal responded by saying that the highly reputable doctor from the United States who had requested the uteruses had left England 18 months prior to the Ripper slaying. Some people suspected Dr. Francis Tumblety. However, he was by no means “reputable.” Most considered him a charlatan and quack, and later, he called himself an Indian herb doctor. However, he had a collection of uteruses. Could those have included the ones from the Ripper victims?

Francis Tumblety: One of the Best Jack the Ripper Suspects

Do the Crimes of Holmes and Jack Overlap?

Interestingly, Holmes regularly left a constant paper trail of financial transactions, promissory notes, legal problems, and lawsuits in the United States. Oddly, his trail falls silent after July 1888 until 1889. Therefore, it may not be a coincidence that Jack the Ripper committed his killings in a short span of time from August to November of 1888. Jack the Ripper disappeared suddenly after he took his last victim. Not too long after the horrific murder of Mary Kelly, a ship’s log revealed that someone called H. Holmes left England for America. (See the following American Ripper Episode).

Regardless of whether or not H.H. Holmes was Jack the Ripper for a few months in late 1888, Jeff Mudgett brought another startling possibility to light. DNA tests indicate that Mudgett is an eighth cousin of Meghan Markle. A popular theory among Ripperologists is that Jack was actually Queen Victoria’s personal doctor. If Jeff Mudget is correct in his assertion, then perhaps the current Royal Family is now an official part of the Jack the Ripper legend.

In the end of Holmes’ life as he sat in his cell, he reflected on his deeds. He confessed that he had led a depraved existence. Although he confessed to 27 murders, many historians think the number was far greater, perhaps even in the hundreds. If H.H. Holmes was Jack the Ripper, so heinous was the nature of the Whitechapel crimes, that he was never able to admit to them even in the face of certain execution.