Most people are aware of the mysterious last flight of Amelia Earhart. People continue to theorize regarding what happened to the famous aviatrix. What many may not know, however, is that there are other stories of planes (and pilots) that went missing under mysterious circumstances. In fact, there are a large number of aerial disappearances that have occurred throughout the history of aviation.  Here are snapshots of five flights where the planes and their occupants seemed to vanish off the face of the Earth.

Postcard of the White Bird, This French biplane disappeared in 1927 during an attempt to make the first non-stop transatlantic flight between Paris and New York. The aircraft was flown by Charles Nungesser and Francois Coli.

In the 1920s, French aviator Charles Nungesser was well known. He even performed flying sequences in early Hollywood films. A main competitor of Lindbergh, he wanted to beat the young American in a flight across the Atlantic. He left Paris on May 8, 1927, headed for America’s east coast. In due time his plane was spotted over Ireland, right on schedule.

Nungesser and his plane were never seen again.

The natural conjecture was that he ditched into the Atlantic at some point, but others theorized he actually crashed in Newfoundland or Maine. If he did make it to Canada or the U.S., no wreckage was ever found. 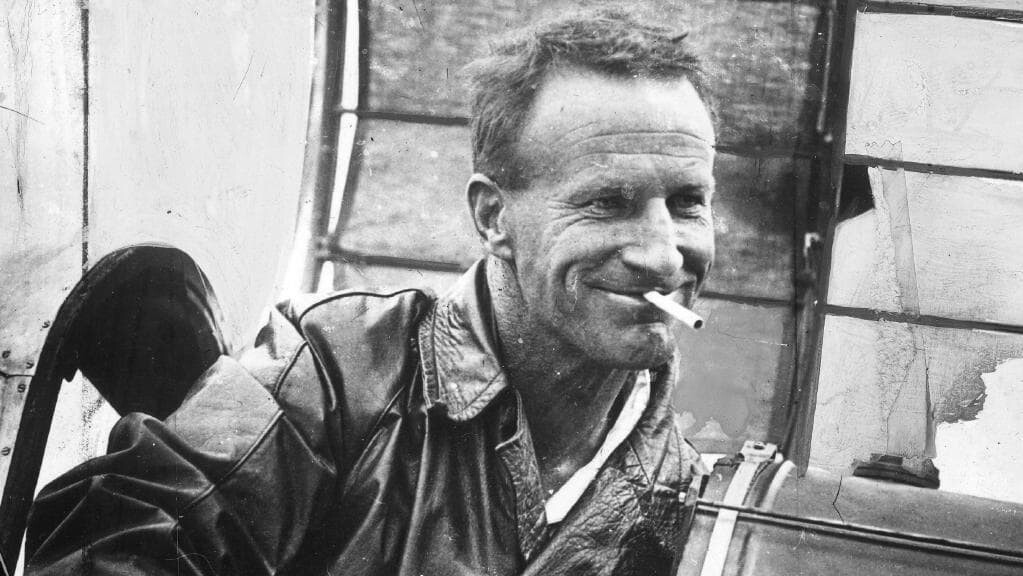 Almost ten years later, in 1935, Australian Charles Kingsford-Smith was making a flight from India to Singapore. His plane was spotted entering the air space over the Andaman Sea, but he never came out the other side.

Two years later, small plane parts were discovered in the waters near Burma. The company Lockheed, who had constructed Kingsford-Smith’s plane, was able to confirm the wreckage belonged to the lost aviator’s plane. There remain the mysteries of where the rest of his plane is (it was not near the site where the initial wreckage was found) and what caused it to crash into the sea.

Andrew Carnegie Whitfield with his sister.

One year later, on April 17, 1938, pilot Andrew Carnegie Whitfield prepared to make a quick 15-minute flight from New York to New Jersey. His plane vanished mid-flight. It was presumed that his plane had crashed somewhere en route, but then the mystery became bizarre. It was discovered that Whitfield had checked into a hotel on Long Island under a false name. He left all of his belongings behind at that hotel. After his disappearance, a man claiming to be Whitfield called the Whitfield home. But nobody was home, as the family had joined in the search for the missing pilot. Before the man hung up, the operator heard him say: “Well, I am going to carry out my plan.”

There was no further contact, and the mystery remains unsolved.

Antoine De Saint-Exupéry in the cockpit.

In July of 1944, at the height of WWII, pilot Antoine de Saint-Exupéry (most famous for his book “The Little Prince”) was flying a military flight to observe the activities of the German army. He flew his plane from Corsica and was never heard from again. It was assumed he’d crashed into a body of water on the way.

The story was mostly forgotten when, in 1998, a fisherman off the shores of Marseille, France, found a silver bracelet engraved with Saint-Exupéry’s name and the name of his wife. Because Marseille is more than 100 miles off of his planned route, there was some doubt as to the genuineness of the bracelet. The found jewelry was supported two years later, however, when plane wreckage was discovered on the seafloor, also near Marseille. It took until 2003 to navigate the red tape to retrieve the wreckage from the water, but it was soon confirmed to be that of Saint-Exupéry’s plane. The mystery seems to be solved except for the question of why Saint-Exupéry was flying over an area so off course from his initial flight plan.

Lastly, there is the strange tale of Felix Moncla and Robert Wilson.

On November 23, 1953, the radar station at Kinross AFB near Lake Superior noticed an unidentified blip in their airspace. They were unable to make contact with the mysterious object, so Moncla and Wilson were ordered to fly out and determine the nature of the object.

Moncla and Wilson were tracked on Kinross’s radar and the ground crew watched their blip approach the unidentified object. Incredibly, the radar operators watched Moncla and Wilson’s blip approach the foreign object, merge with it into one single blip, and then vanish off the radar screen. All attempts at radio contact were futile. An exhaustive search took place but nothing was ever found.

There has been other unfortunate plane crashes since 1953, and there undoubtedly will be more. But while the majority will have wreckage and black boxes that are found to provide answers about the crash, there will undoubtedly be a select number of cases where there are more mysteries than answers.