Amelia Earhart’s life story is the gift she left the world.

Amelia Earhart’s greatest gift and legacy that she left the world after her tragic disappearance is a life story that profoundly inspires us to this day. She is still so much alive for all of us. Organizations continue to look for her, we continue to talk about her, and articles about her are plastered across the web. What exactly made her so special that the world continues to honor her even after all these years beyond her death? This is the amazing story of Amelia Earhart’s life. 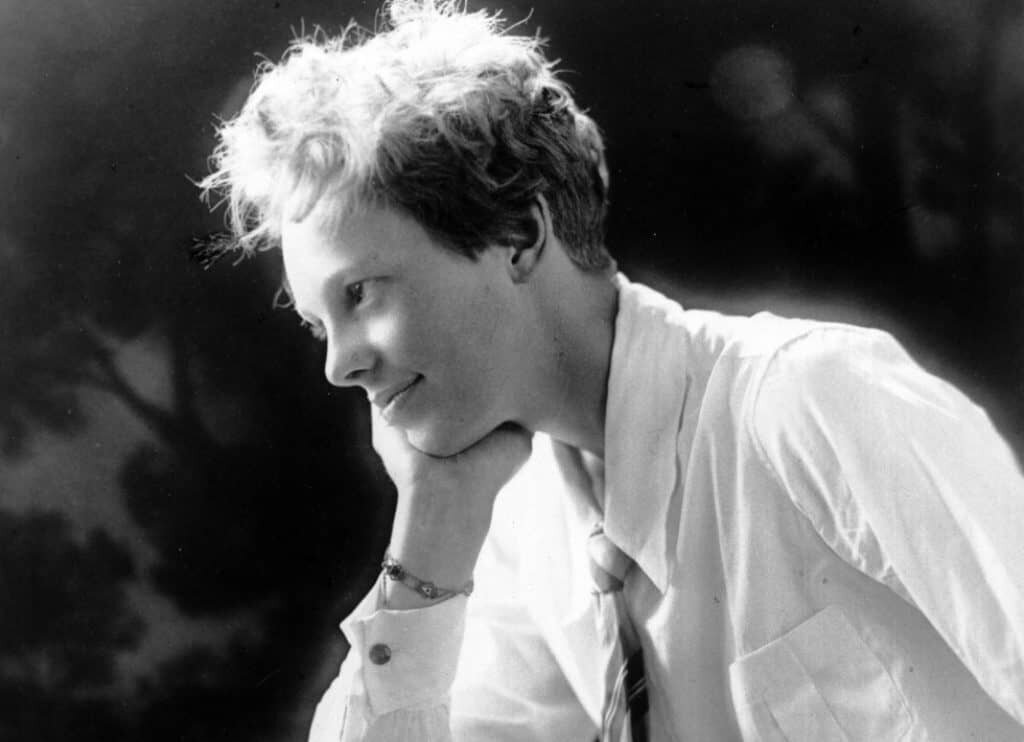 The inspiring history of Amelia’s life centers around her numerous achievements, immense courage, and sad tragedy. In all the grandeur of her life, she was most notably a brave and ambitious female pilot. However, she was so much more than that. As a larger-than-life woman, she sought to transcend the boundaries faced by women of her time.

She also served as an activist for women’s rights, mentored girls to help them accomplish lofty goals often dominated by men, and she even sought to redefine women’s fashion by creating her own brand name clothing and luggage lines. With an unconventional mind that was blind to barriers and obstacles, she charged fearlessly after everything she wanted.

Amelia Earhart’s life was rather unconventional for her time. When she was a young girl she liked to do things one might characterize as tomboyish. Her mother never tried to make her conform to girlish standards. She even wore bloomers (baggy Turkish-style pants under dresses) to school at a time when they were not yet completely accepted. Bloomers allowed a girl or woman greater freedom of movement and health than the customary tightly fitted dresses that were common in her day. They were also a symbol of the feminist movement.

For young Amelia, pants allowed her to be an active little girl. This was important, as she enjoyed things such as playing outdoors, climbing trees, and collecting insects with her younger sister. She sought out adventures around the neighborhood and even had imaginary animal friends. 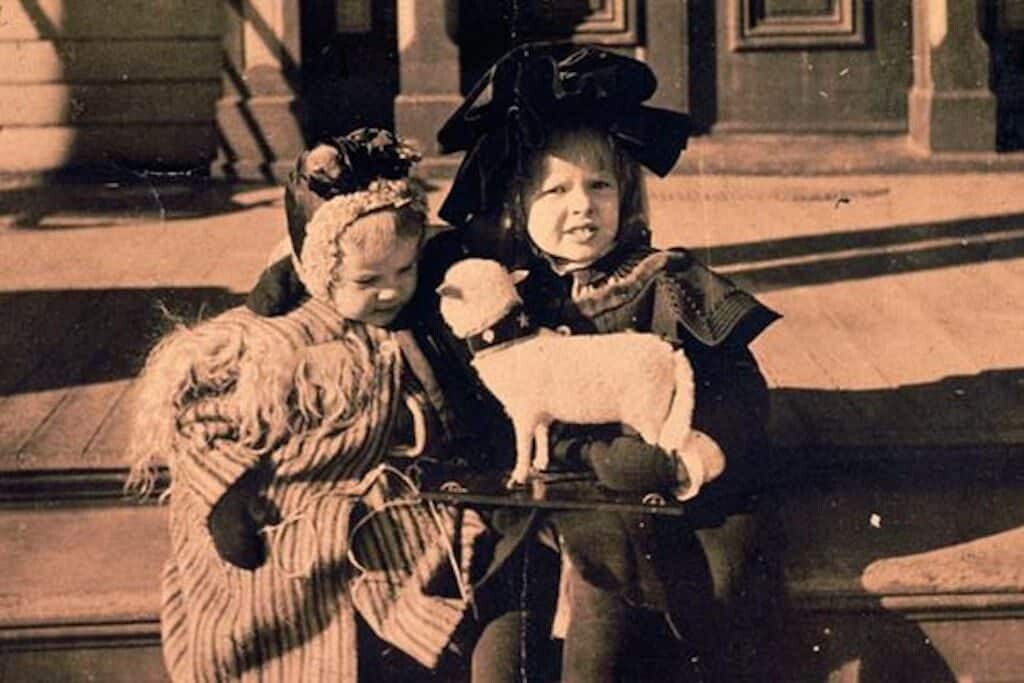 Amelia and her sister, Muriel, as young girls. Public domain.

An Aviatrix is Born

Amelia Earhart’s life as an aviatrix began in California in her early twenties. When she was 23, she and her father attended an air show where she was able to take her first ride ever. Her own words summed up her feelings about being in the air:

“By the time I had got two or three hundred feet off the ground, I knew I had to fly.”

Amelia was inspired. She began working multiple jobs to pay for flying lessons, and about a year later she bought her first plane, a Kinner Airster biplane. A few years later she moved to Boston where she eventually met her future husband George Putnam, who owned a publishing house. He too had an interest in aviation and had published some of Charles Lindbergh’s works. As their friendship developed, he created opportunities for Amelia and helped her to promote herself.

The Sky and Beyond is the Limit

It seemed that Earhart became famous virtually overnight. After her flight across the Atlantic as a flight log keeper, she began to win the hearts of Americans and returned home to cheering fans. She had become the first female to ever fly across the Atlantic. Amelia followed up this achievement with records for speed and distance.

In 1935, she was the first person to ever fly the Pacific Ocean from Hawaii to California alone. It took her 18 hours to complete the flight, and she arrived to meet thousands of cheering people. Amelia Earhart’s life had changed dramatically. She had officially become a huge celebrity, however, she did not stop there.

Amelia’ stature grew in the public’s eye, in business, and in aviation. The public bought the books she wrote about her flights, as the aviatrix toured the country to promote them. A number of product ad campaigns featured Amelia. She also created a clothing line that was sleek and stylish, but also easy to care for (machine washable) and comfortable – things a modern independent woman wants. Plus, she advocated for the aviation industry, including commercial flying. Various companies and organizations across the country wanted to either employ Amelia or wanted her to lecture.

The Role Model Goes to Work

Earhart developed a particular interest in promoting aviation, especially for female aviatrices. Her personal feminist-leaning and unshakable ability to strive for whatever she wanted led her to become a powerful role model for young women. She used her job at Cosmopolitan magazine as Associate Editor to voice her thoughts about aviation and women’s rights.

The eager activist also accepted a position at Purdue University as a female career counselor, where she taught young women that they can reach for the stars. Amelia encouraged them to stay in school, get a degree, and not to get married at an early age, lest the young lady gets trapped in a “cage,” where she will not be able to accomplish her dreams.

Amelia was the epitome of an independent woman. Marriage was not something she thought of favorably most of her life. As a matter of fact, George Putnam had to propose six times before Amelia finally accepted. However, her acceptance came with her deeply convicted conditions. She would not be held to standards of faithfulness, nor would she expect it of Putnam. She wanted to continue to earn her own money so that she didn’t have to ever become dependent on him. And last, she would keep her maiden name.

With these conditions, Amelia married in 1931 at the age of 33. George Putnam continued to actively support her in her goals. However, her flying goals were getting bigger and riskier.

Amelia became determined to fly around the world. Her first attempt ended with a problem during her take-off in Hawaii. Unfortunately, the plane suffered damage, and the flight was canceled. On May 21, 1937, she set out for her second attempt with co-pilot Fred Noonan. Sadly, this would be her final flight. Leaving Oakland, California, she crossed the United States, the Caribbean, and then entered Brazil. From there, she continued to West Africa, India, Thailand, Indonesia, Australia, and New Guinea.

Their next destination was Howland Island. The United States Coast Guard ship named the Itasca was stationed at the island. They would be aiding the pilots by transmitting directions for her to find the island once she was in the vicinity. Although the Itasca was receiving Earhart’s radio transmissions, she was not receiving theirs. Therefore, she was never able to find the island, and she wound up flying too long on a tank low on fuel.

Amelia and Noonan disappeared on June 2, 1937. Despite many official searches which are ongoing to this day, not a shred of conclusive evidence of her wreckage has surfaced.

Amelia Earhart’s life was cut short when she was only 39 years old. It was a tragic event for all the world, which had grown to know and love her. She had accomplished so much, but not just as a brave pilot. Yes she, herself, wanted to transcend the stereotypes and social barriers of her time. However, the real beauty of her life is that while she was unstoppably accomplishing personal goals, she also really wanted to help others to do the same.

She actively served as a beacon for young women during a time when it was almost every girl’s biggest dream just to get married. She taught them that they were more than future wives and to strive to achieve their biggest aspirations regardless of inequalities and social barriers. Amelia inspired countless people while she was alive. How many more would have reached for the stars because of her? And how much more could she have personally achieved had she lived a full life?

History can tell us so much, and even in a tragic death, we can be left with great blessings. Amelia Earhart’s life is a lasting legacy in and of itself. And in the stories, news reports, social media, and in the continued efforts to find her, Amelia is still speaking to us. She still profoundly inspires.

Pagan Easter: Where Did the Modern Tradition Really...