Today, it is difficult to imagine that black cats were once dreaded and persecuted. After all, some of our favorite characters have been black cats, such as Felix the Cat, Snowball II of The Simpsons, and Sylvester the tuxedo kitty. However, the world sentiment about black cats has been mixed. Black cat superstition has been a real phenomenon throughout history, and this has led to many misguided notions about them, especially in Medieval Europe. Fortunately for the black cat, there have also been good black cat superstitions where people admired and even worshipped the feline. 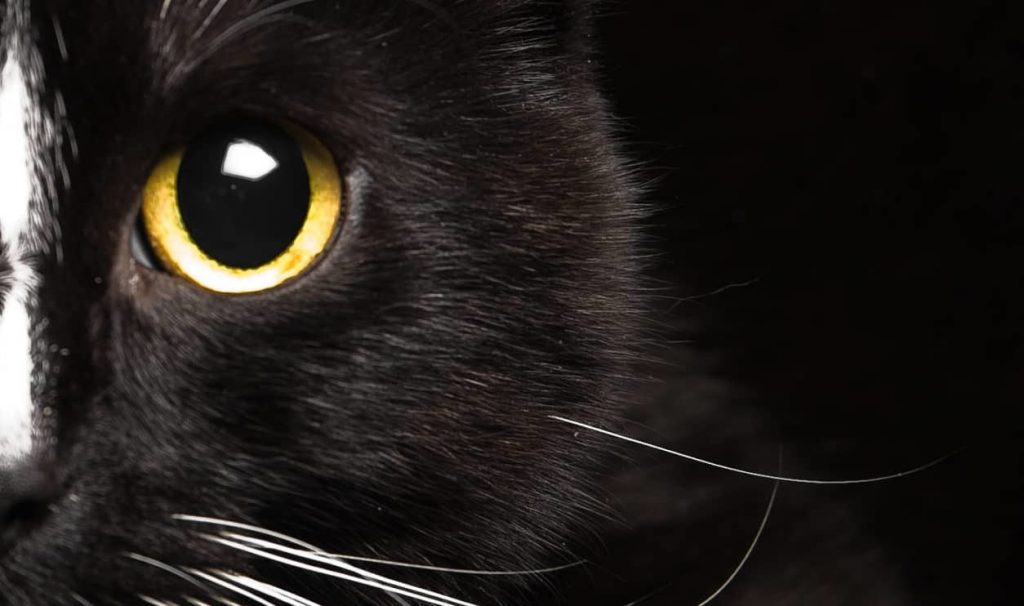 Superstitions can be negative or positive, depending on the context. Although it’s speculation, the origin of black cat superstitions may stem from our prehistoric human ancestors. Early man had a big problem with cats. Many of them were much larger in size than they are now. Plus, the big kitties had voracious carnivorous appetites and even snacked on the occasional human being. Because humans were not always at the top of the food chain, the fear of cats was necessary for survival. If someone came into contact with a huge South American Smilodon – the saber-toothed tiger – it was his fear that could help him to fight or run away.

This early fear of cats may have created a primal distrust of felines that most, but not all, of humankind have overcome as cats became smaller. Although nobody knows what color the Smilodon was, it was specifically black cats that became the primary target of negative superstitious beliefs.

During the Middle Ages, bad black cat superstitions took hold. Some people assigned sinister qualities to them. Normans and Germanic people believed that, like the black raven, a black cat was a sign that a death would soon occur. They thought that if a black cat crossed your path it was bad luck. The fears about black cats spread throughout Europe over time and, sadly, mass killings of black cats took place. Although certain areas of Europe, such as places in the UK, had some positive black cat superstitions, the black feline was often misunderstood and mistreated.

The Middle Ages, also called the Dark Ages, in Europe, was a time of many superstitions that resulted from early spiritual beliefs and a lack of scientific understanding about nature. The persecution of people accused of being witches is a clear example. Many people believed that witches and black cats worked together. Supposedly, the devil sent the black cat to assist in the witch’s evil deeds. Additionally, witches were able to turn themselves into black cats so that they could slink around in the shadows casting spells on unsuspecting people. 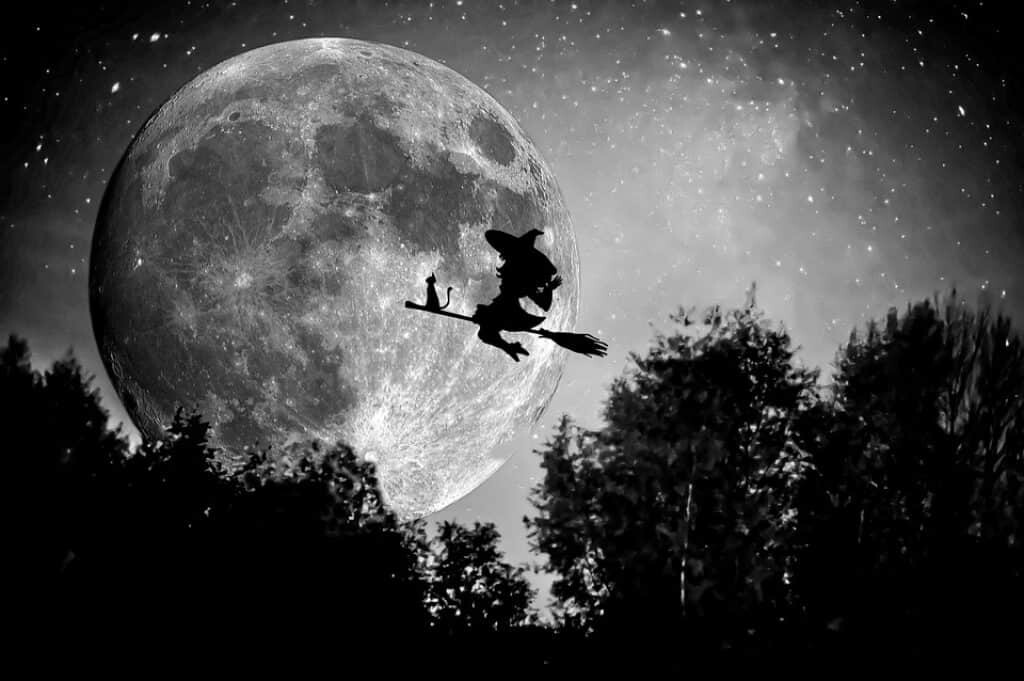 Classical depiction of a witch riding on her broom with her black cat. Public domain.

Innocent women (and some men) and black cats were persecuted unjustly. It is estimated that hundreds of thousands of people accused of being witches were killed across Europe (Scienceblogs.com). Additionally, black cats were being eradicated, and this may have been one contributing factor – coupled with other major environmental catalysts – that caused the mouse population to grow out of control. The mice spread a disease called the Bubonic Plague, and more than 25 million people died over the course of 5 years (infoplease.com).

Later, certain religious groups from Europe took their black cat superstition with them to America. Still very enmeshed in some unscientific beliefs, many people within these groups believed that witches and the devil lived among them. Thus, witch hunting became a legitimate and profitable business, and the persecution of suspected witches and cats continued through the Salem witch trials (and elsewhere) of America. Horrifically, black cats also suffered mass killings on Shrove Tuesdays before Lent.

Black cat superstitions had become cemented in American history, and the unfortunate mistreatment of black cats ensued. Eventually, the Halloween black cat emerged to the detriment of real cats across the country. This only served to perpetuate negative attitudes about innocent felines. Both witches and black cats are commonly used today to enhance the fear factor of Halloween. However, black cats were not always symbols of bad luck. In some places, they were even worshipped.

When the domestication of cats occurred in the Middle East and Egypt thousands of years ago, felines took on a very special meaning. Because cats provided a life-saving service of keeping royal food stocks safe from rats, mice, and other critters that caused diseases, felines earned a very high status among the Egyptians. The cat goddess, Bastet, who was part cat and part woman, is a reflection of the reverence Egyptians held for felines. As one of the most important Egyptian gods, Bastet granted good fortune for people who housed and protected cats.

However, cats in Egypt were more than just symbols of good fortune and helpfulness. Egyptians considered them an embodiment of the gods and worshipped them. Thus, it was illegal for anyone to kill a cat, even accidentally. The penalty for this grave offense was death. In fact, Egyptians’ love and respect for their cats were so strong, that owners would often mummify them after death. Additionally, families would mourn their cats’ deaths as if a family member had died. In fact, owners and their felines would often be buried together. 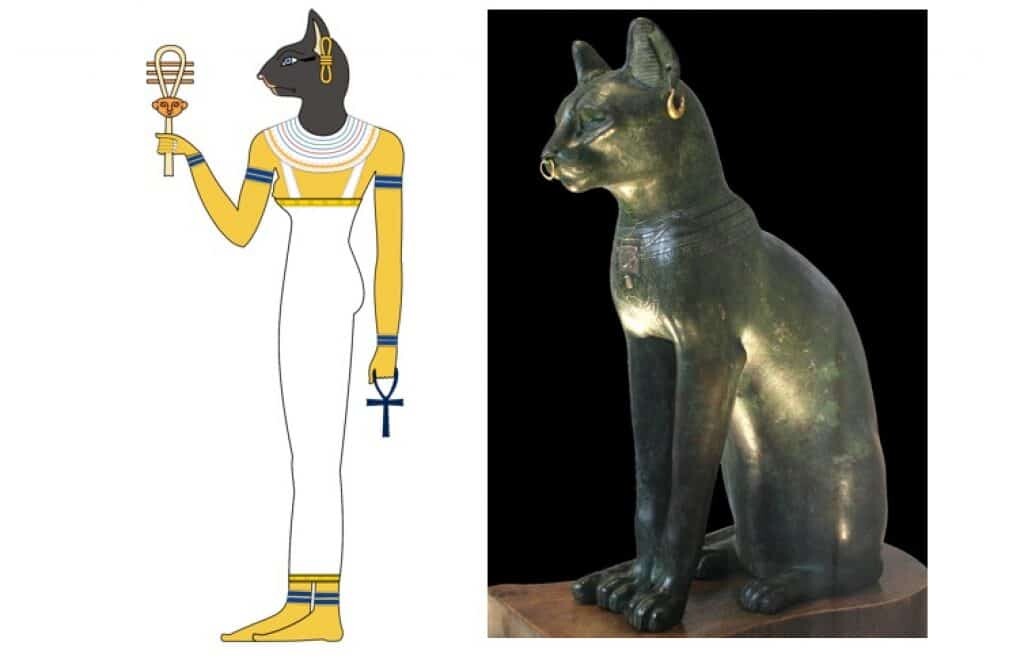 There have been other good black cat superstitions scattered throughout Europe. In England and other places, a black cat on a ship could be lucky. Pirates believed cats could portend the future of their ship. For example, if the cat walked on and stayed on the ship, it meant good luck. But if the cat walked on and then off again, this was a bad sign that the ship would sink. It was also beneficial for the wives of fishermen out at sea to have black cats at home as good luck charms to help the fisherman make a safe return home. Some cultures in Europe also believed that if a black cat walked toward you it was bringing good luck.

In Japan, they still have positive superstitions about black cats and cats in general. They are symbols of good fortune and prosperity. The Maneki Neko cat statue sits inside almost all businesses with one paw up, waving in the good fortune. There are both white and black Maneki Nekos. Many young, single women in Japan own black cats, because they believe it will bring in many suitors.

Why Were Black Cats Persecuted in the Middle Ages?

What exactly is the origin of bad black cat superstition? As noted, during the Middle Ages and beyond, unfounded superstitions led some groups to hunt down and eliminate black cats. Those superstitions may have their roots in the fact that the black cat was worshipped in some places.

Before a number of modern religions became widespread, most people around the world worshipped a pantheon of gods – often in the form of idols. However, once monotheism became more prominent, polytheistic deities became associated with demons. For example, early Christians at one time believed that statues of Roman gods were embodied with evil spirits. Some of them even went to great lengths to destroy Roman temples and their deity statues.

Egyptians were also polytheistic, having a belief in many gods. They worshipped black cats and cat statue idols, and they believed gods dwelt within the cat. Is it possible that early Christians associated the worship of black cats to the worship of evil spirits, as in the case of Roman statues? According to the Committee for Skeptical Inquiry, Romans, like the Egyptians, had very high regard for cats and may have even revered them. Did superstitious-minded people believe that if black cats could contain pagan gods, the felines could also contain witches?

Fortunately, science has replaced superstition in most places around the world, and people now understand that there is no basis in any negative attitudes about black cats. Yet, even in our modern society, some people fear the black cat, and sadly, black cats still have a higher risk of mistreatment, especially around Halloween. Cat lovers everywhere can testify to the fact that when you give cats respect and affection, regardless of the color of its fur, they could never bring you anything except years of loving companionship and joy.

Related Article: Big Cat Sightings in Scotland are a Mystery

Was the Moon Landing a Hoax

Is There Really Any Fort Knox Gold

Lost Continents of Mu and Lemuria