There are many cryptid creatures and the entire field of cryptozoology is dedicated to their study. By definition, a cryptid is an animal whose existence is questionable. In the waterways of Pacific North America, one such creature, described as a giant plesiosaur-like, serpentine animal, has confounded witnesses for at least a hundred years. Its name is Cadborosaurus. Although there have been 200-300 reports, ‘Caddy’, not unlike the Loch Ness Monster, has proven elusive. Unfortunately, there is no hard evidence of this ‘sea monster.’ However, the possibilities are intriguing, albeit endless. Is this cryptid some kind of undocumented sea serpent, a relic from the age of dinosaurs, or just a mythological fabulation?

Cadborosaurus is purportedly a cryptid sea serpent which has many descriptions. Image compilation: Historic Mysteries.

Where Does Caddy Live?

Mariners have been reporting sea serpents for thousands of years, and nearly all cultures around the world have embraced its mythology in one form or another. However, Cadborosaurus is specific to Northwest America and its waters. This mega-serpent purportedly makes appearances off the coast of Canada, in British Columbia lakes, around Alaskan waters, and as far south as San Francisco and Monterey Bay in California. Even the Inuit report of a similar creature.

Named for numerous sightings in Cadboro Bay in Victoria, Caddy descriptions vary widely. In general, the adults are up to 40 or 50 feet in length, while the juveniles are 10-15 feet (NYT). They have slender, scaly, elongated bodies like a large lizard or giant eel. In fact, cryptozoologists have classified the sea serpent as a reptile and believe it may be a relic from the age of the dinosaurs – perhaps a plesiosaur. Its head looks like a camel or sheep, and it almost always possesses fins or flippers. However, the number of fins, their location, and their descriptions differ. Some witnesses have indicated that the rear fins seem to lead to a tail that fans out.

There are black and white photos from 1937 showing a long creature that fishermen had pulled out of the stomach of a whale near the Queen Charlotte Islands. At that time, experts sent out tissue samples to the BC Provincial Museum for tests. One of the samples became lost. Experts tentatively deemed the other a fetal baleen whale. However, eyewitnesses say that there is no way that it could have been a fetal baleen whale. (Coleman). Nonetheless, cryptozoologists consider this photo of the Naden Harbour Carcass, shown below, to be a compelling piece of evidence. 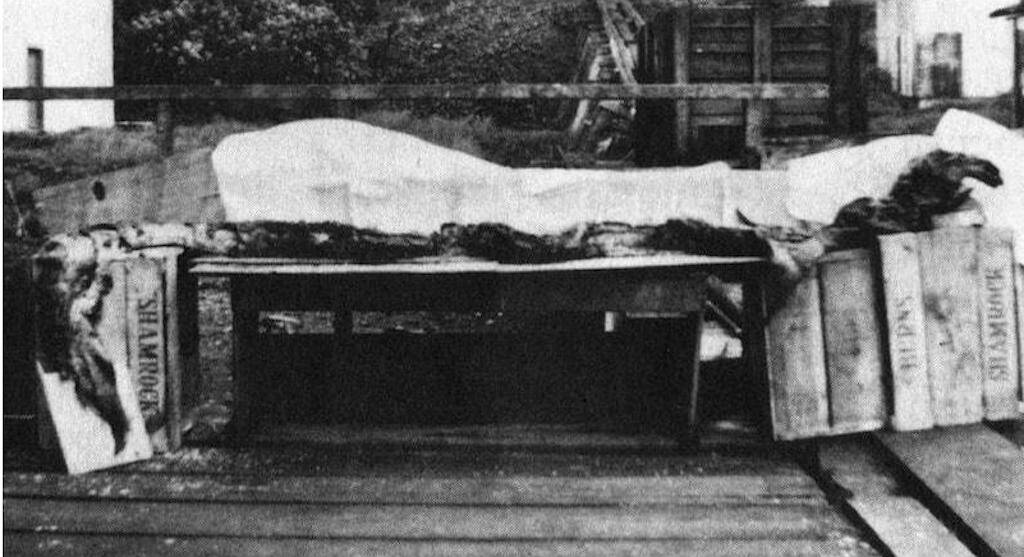 This creature purportedly came out of the stomach of a whale in 1937. Could this be a Caddy? Public domain image.

In the 1990s, Edward Bousfield, a zoologist, and Paul LeBlond, an oceanographer, took an interest in Caddy. They compiled and studied hundreds of reports, photos, and specimens of lake creatures and ‘sea serpents.’ Additionally, they classified a new species for Caddy and named it Cadborosaurus willsi. In 1995, the two men published Cadborosaurus: Survivor From the Deep. In the book, as quoted by Coleman in Ed Bousfield, A Daring Zoologist, Dies, they give “a systematic review of observations and analysis of biological characteristics of our elusive cryptid friend.”

Camelops: The North American Ancestor of All Camels

Bousfield was born at the southern point of Lake Okanagan, which is famous for its own lake serpent, the Ogopogo. It too has had hundreds of sightings. Bousfield felt that the “evidence strongly supports” the existence of a large marine cryptid that is probably related to Ogopogo and even the Loch Ness Monster. He also proposed that before dams were built, the sea serpent followed salmon up the Colombia River to Lake Okanagan, where a juvenile may have been trapped.

In contrast to many professional zoologists who fear association with those ‘flaky cryptozoologists,’ Ed considered the anecdotal evidence for Caddy as a challenge worth scientific attention.

In 1968, Captain William Hagelund caught something strange. He believed that it was a baby sea serpent. According to Hagelund, it was 16 inches long with scales. It also had a tail like a flipper and two additional flippers on its body. Unfortunately, the captain tossed the creature back before anyone could photographic or study it. Additionally, it was years before he recounted his story officially. Bousfield and LeBlond believed he had seen none other than Caddy.

Darren Naish, Michael Woodley, and Cameron McCormick analyzed all of the possible candidates of a non-cryptid nature to identify Hagelund’s sea serpent. They believe the “monster” was really just a pipefish after all. They published their data in September 2011 in Scientific American, “A baby sea-serpent no more: reinterpreting Hagelund’s juvenile Cadborosaurus.”

Captain Hagelund’s baby Caddy (above) and a pipefish (below). Illustrations by Coleman.

Real science does not begin and end with the collection of anecdotes and photos, thus, Bousfield and LeBlond faced severe criticism by the scientific community. Naish et al. have referred to the work of Bousfield and LeBlond as “a biased and unscientific approach to the investigation of this subject” and “bad science,” as it falls more into a category of speculation and pseudoscience.

Video Footage of a Sea Serpent?

Still, there are many believers in Caddy. In the Nushagak Bay, Alaska, the local fisherman Kelly Nash purportedly filmed a creature he believed may have been a sea serpent in 2009. Discovery aired a short clip of the footage in 2011 in the program, Hilstranded. Here is the short, edited footage.

What Else Could the Creature Be?

Scott Mardis, an investigator of the Lake Champlain ‘Monster,’ published a rather fascinating paper about the Naden Harbour (photo above) titled, What Was the Naden Harbour Carcass, aka Cadborosaurus willsi? Mardis proposes a number of creatures that sometimes fit the descriptions of Caddy during various stages of decomposition. After all, once the flesh has rotted off, oftentimes the vertebrate creature that washes up on the shore is a long, slender carcass that bears no resemblance to its original form. This leaves room for much speculation, as in the case of the Naden Harbour carcass.

Although Mardis draws no conclusions, one of the main candidates for the animal in the Naden Harbour photo may be a decomposed basking shark, as seen below.

These basking shark carcasses could be mistaken for Caddy or Plesiosaur. Images: Academia.edu.

Throughout recorded history, people have told stories of serpentine creatures in the oceans and lakes. The sightings additionally span a range of places, yet they have some similarities in common. Thus, it is hard to dismiss the possible existence of a Caddy-like creature. Consequently, the attempts by Bousfield and LeBlond to classify Caddy and to boldly publish their determinations becomes, perhaps, understandable. Who can blame them for seeing the ‘truth’ of a Caddy in their ‘evidence’? Whether or not that pesky “law of expectations” is at work in their research is another matter altogether.

Still, the fact remains that not one carcass, skeleton, or live specimen has been found and identified as a cryptid sea serpent. This does not mean Cadborosaurus is not real. It just means that we haven’t found the irrefutable smoking gun yet if there is one. And just as when the world went from being flat to round thanks to a deviant philosopher, naysayers will have to rethink the giant creature if it is ever found.