Camelops: The North American Ancestor of All Camels

Camels can be temperamental. They’ll even “spit” at you if they feel threatened. But they are also amazingly hard-working, graceful, and rather comical in appearance. While camels are stereotypically associated with the Middle East and Africa, they actually originated in North America around 45 or 50 million years ago. The earliest known North American camel genus was Protylopus and was the size of a rabbit. That prehistoric camel evolved into the Camelops – the last species of the large North American camel. Eventually, the American camel migrated into Asia and beyond. In essence, one could say that camels are “Made in America.” But how did Camelops get from the Americas to Asia, and why don’t we have camels in North America anymore? 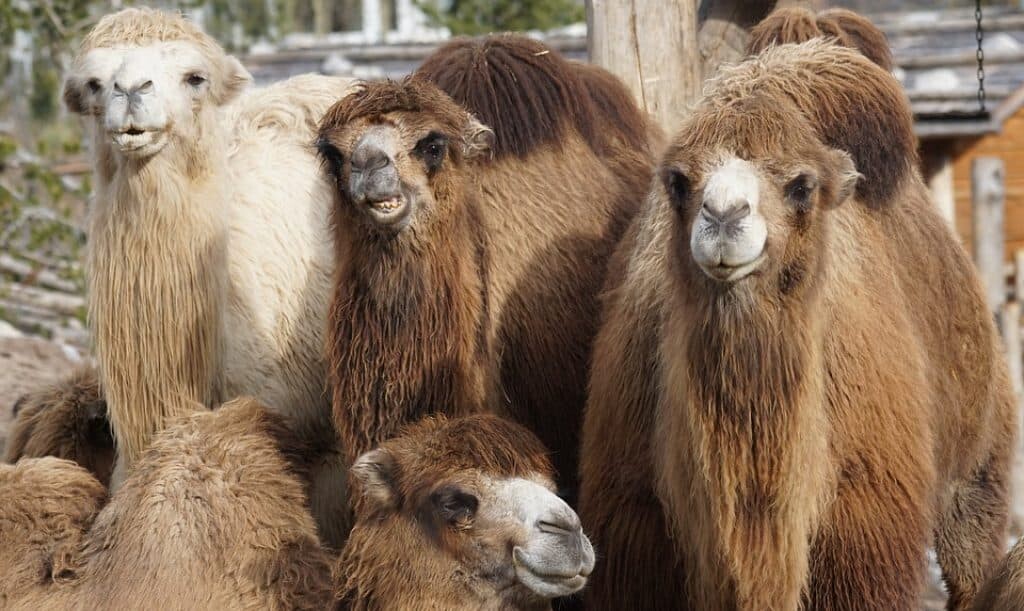 All camels evolved from the North American camel. These are Bactrian camels with two humps. Public domain.

Camelops, which lived between 3.6 million and 11,700 years ago, roamed from Alaska to Mexico, however, their fossils have never been found east of the Mississippi River. Consequently, people sometimes call this American camel “the western camel.” The American paleontologist Joseph Leidy (1823-1891) first described the species in 1854.

The ancient American camel, Camelops, whose name means “camel face,” looked like a large dromedary. It was seven feet tall at the shoulder and weighed around 1800 pounds. This is slightly larger than the modern dromedaries that stand between 5.5 and 6.5 feet tall and weigh between 660 and 1320 pounds. It had elongated spines on its anterior back which suggest it had a single hump like the dromedary.

Initially, many previous researchers had concluded that, based on morphological studies, the American camel was more closely related to South American camelids, like the llama, than to the Old World camels like the dromedary. In 2015, however, a team of US and Canadian researchers led by Peter Heintzman of the University of California Santa Cruz (USSC) analyzed the DNA found in Camelops fossils and compared it to that of living camel species. The researchers found more similarities between the prehistoric camel and the Old World camels than between Camelops and the South American camelids.

Creature of the Ice Age

The North American camels’ dromedary-like features, like humps and big eyes, may have originally developed to enable them to survive the cold of the Ice Age. In 2013, a team of scientists led by Natalia Rybczynski from the Canadian Museum of Nature found fossils of large American camels on Ellesmere Island in the northernmost part of Canada. The camels, which had lived 3.5 million years ago, looked like dromedaries but were about 30 percent bigger.

Rybczynski noted that many of the features of present-day dromedaries could have been useful to an Arctic creature. Modern-day camels, for example, have large, flat and wide feet that help them walk on sand. Those same feet could have also helped a North American camel walk on snow. A camel’s hump enables it to store fat, so it won’t immediately starve if it can’t find food. A hump would have enabled the Arctic camel to survive harsh winters during which finding food would have been difficult. Finally, camels have big eyes that would be useful for seeing in dim light – and the Arctic stays dark during the winter because the sun never clears the horizon during those months.

The Great American Interchange happened three million years ago when volcanic activity formed the Isthmus of Panama that connected South and North America. As the two continents had been separated for over 200 million years, very different animals had evolved within them. Animals native to South America included porcupines, armadillos and some marsupials including the ancestors of the Virginia opossum. The North American camel was among the animals that headed south. The American camel’s descendants became the guanacos, vicuñas, llamas, and alpacas. 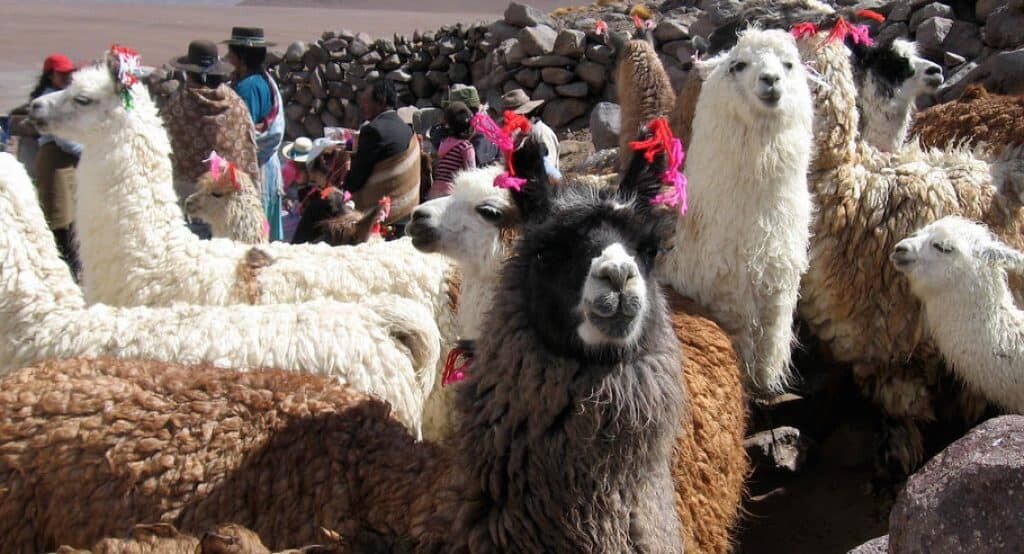 The North American camel evolved into camelids, which include the South American llama. Flickr: Fearghal ONuallain.

During the Ice Age, glaciers up to two miles thick covered parts of Asia, North America, and Europe. These glaciers locked up much of the world’s water and caused sea levels to drop by as much as 300 feet. Regions that currently lie underwater were at one time dry land. One such region was Beringia.

Beringia was cold and arid. Most of the plants were small shrubs that grew low to the ground. Many of the animals, including the North American camel, would have grazed along rivers or near meadows. Beringia was also the only link between North America and Europe. So animals migrating between the two continents had to travel through it. Migrations from Russia to North America included mammoths, caribou, humans, and members of the dog, cat and weasel families like dire wolves, lynx, and wolverines. The horse and North American camel were among the animals that traveled into Russia. From there, descendants of the American camel continued on into Asia and the Middle East, eventually developing into the modern dromedary and Bactrian camels.

In 2007, construction workers at the Mesa, Arizona, Walmart found two camel skeletons. The camels had been young when they died – one was a baby. Although scientists attempted to evaluate the Walmart camels, tests were inconclusive. They estimate that those American camels may have lived around 10,000 years ago.

What Happened to the American Camel?

Sometime after modern humans reached North America, the Camelops went extinct for unknown reasons. One theory suggests that human hunting caused their extinction, however, there are strong counter-arguments against the idea. Ultimately, we may never know the cause.

One thing we do know is that the ancient North American Camelops had already begun their worldly migrations before they died out in North America. They evolved into various species, including the Bactrian two-humped camel and the dromedary one-humped camel. There is even an endangered wild two-humped camel that roams areas of Western China and Mongolia. Today, camels and their relatives inhabit regions across the globe to provide food, transportation, and pack services for humans. The only traces left of the American camel now lie in the ground awaiting discovery by curious scientists.

Queen Ranavalona I: The Most Murderous Woman in History