In Southern Illinois, situated along the Mississippi River in Collinsville, an ancient settlement that we call Cahokia rose to great power between 800-1200 CE. Nicknamed America’s Forgotten City or The City of the Sun, the massive complex once contained as many as 40,000 people and spread across nearly 4,000 acres. The most notable features of the site are hand-made earthen mounds which held temples, political buildings, and burial pits. Cahokia Mounds are a testament to the highly organized culture of the early Mississippian people who built the largest city in pre-Columbian North America. The Rise of the Mound Culture

Small villages first emerged along Cahokia Creek beginning around 600 CE. Subsequently, the climate warmed and more rain found its way to Southern Illinois. Thus, villagers could easily grow an abundance of food. As a result, thousands of people migrated to the area around the Mississippi River. Then as time went on, the Mississippians created a unified culture all their own and began building mounds across their land in the ninth century.

By about 1000 CE, the Mississippians had built the largest civilization in North America. In fact, some people have referred to it as a kingdom, because the Mississippian culture reached up to the Great Lakes and down to the entire southeastern region of North America. The city became the pre-eminent center of religious and political power and may have even controlled a vast trade network from the Rocky Mountains to the Gulf of Mexico.

Although today we call the site Cahokia Mounds, no one knows the original name of the city. French explorers in the 1600s named Cahokia after the Cahokia tribe, which lived in the area around that time. However, they may not have had any relation to the original mound builders.

Culture of the Mound Builders

The Mississippian culture may have originated and, indeed, reached its apex at Cahokia Mounds. The mound builders lived in the Mississippi Valley, Ohio, Oklahoma, and into the midwest and southeast. They worshipped the Sun and other celestial beings within a well-developed religion. Additionally, their lives revolved around warfare, and sacrifices were common. In many ways, however, it was the impressive Cahokia mounds that defined the culture of the Mississippians.

Contrary to early beliefs, the Mississippian mound-builders had sophisticated farming tools, pottery, astronomy, and copper-work. Religion, cosmology, and an organized pantheon of gods were central in the Mississippian life and led to the development of temples within the Cahokia mound complex.

The game of chunkey emerged during the region’s early occupation. This was an important sport in which a player rolled a stone disc and had to throw a spear as close to the stopped stone as possible. The Mississippians played this game in the grand plaza surrounded by the largest mounds in the capital. However, this was not all for fun. The losers and their family members paid with their lives in ritual sacrifice.

Of the many structures within Cahokia Mounds, the most impressive is Monks Mound pyramid. Archaeologists believe that fourteen successive stages of construction took place between the years 900 and 1100 (Unesco). Containing over 25 million cubic feet of soil, the mound rises 100 feet into the air and covers 14 acres. These staggering figures make the Monks Mound pyramid the largest prehistoric earthen structure north of Mexico.

Monks Mound is a towering central structure amidst four large plazas in the city. It overlooked the Grand Plaza surrounded by the stockade. On the top of the mound, a large wooden building sat surrounded by a protective palisade wall. The purpose of the building is uncertain. However, because few artifacts related to dwellings existed during excavations, experts believe it may have been a place for the dead or a site of political and religious council. Additionally, religious ceremonies may have taken place there as well. In fact, Monks Mound may have held a central place in the cosmos of Mississippian religion that symbolically connected the “Sky Realm” with the “Earth Realm.” Thus, Mississippians would have regarded the site as a highly potent religious and political symbol. (Romain). 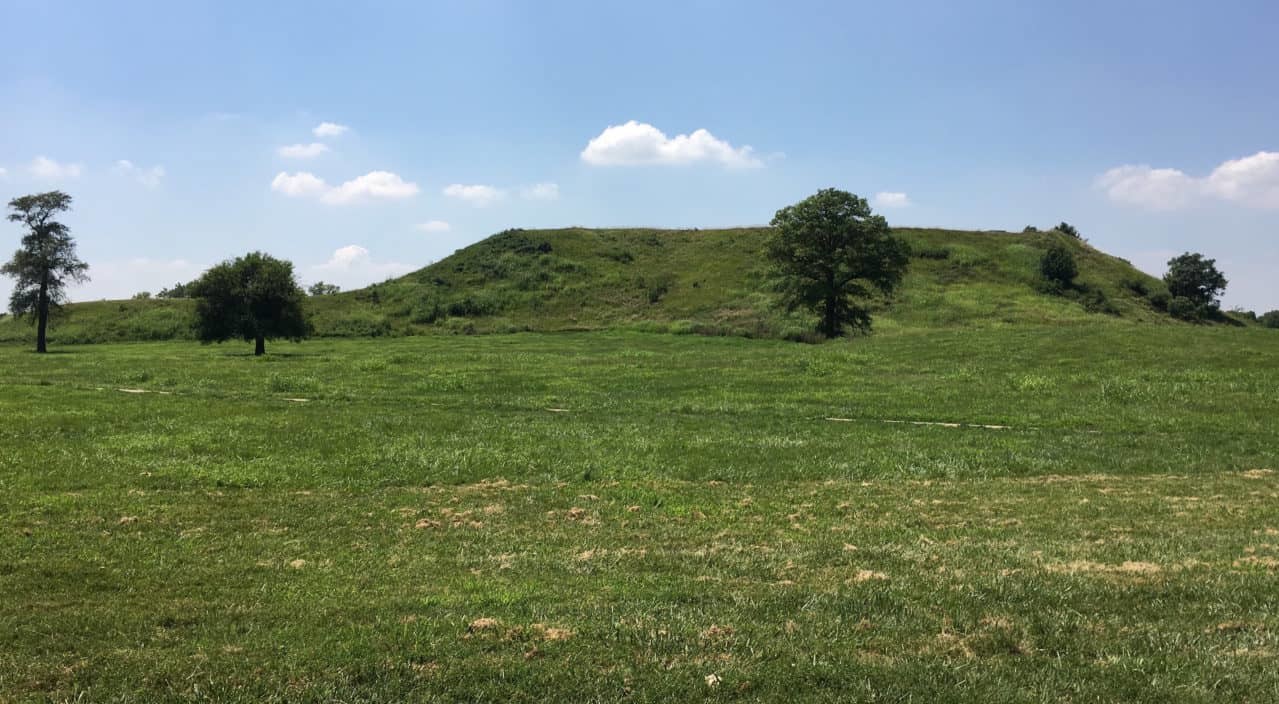 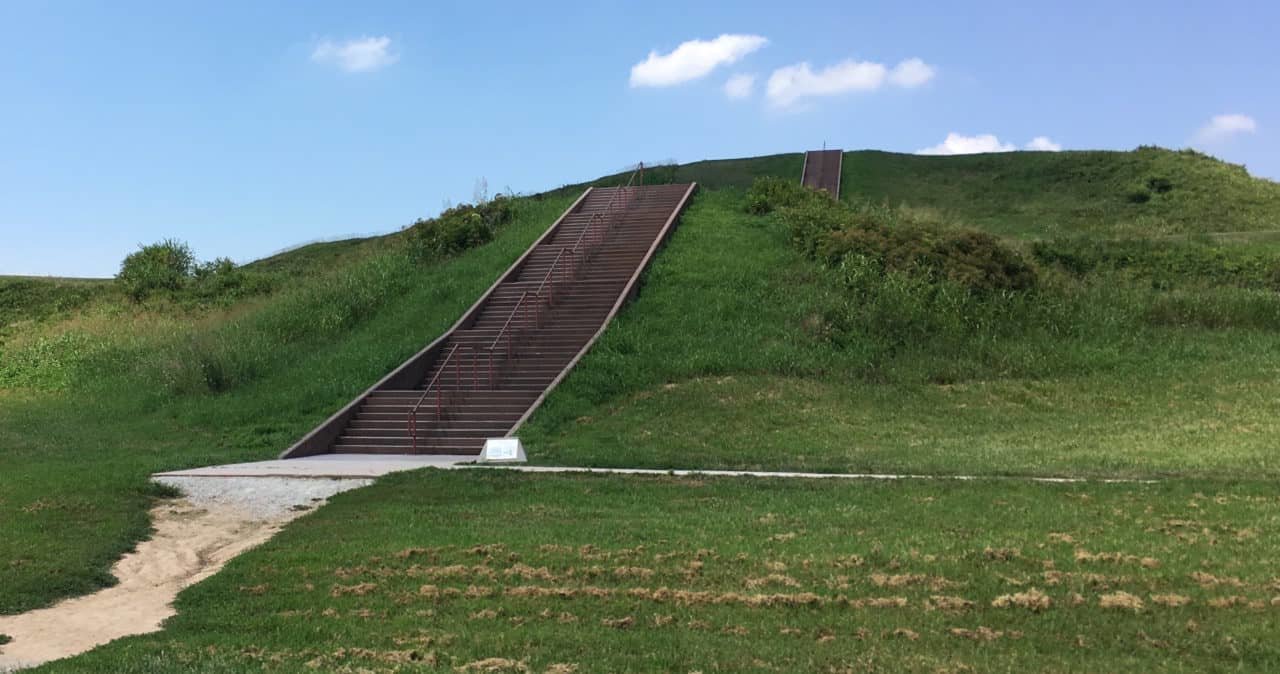 Visitors can walk the 154 steps to the top of Monks Mound. Photo: Historic Mysteries.

It was important for the Mississippians to know when to plant, harvest, and celebrate the solstices and equinoxes. Therefore, they had at least five wood henges strewn around the city that served as calendars at various times. This allowed them to track the sun and seasons with a high degree of accuracy. Circular configurations of wooden posts served as the markers. Four equidistant posts marked the solstices and equinoxes, while posts in between tracked the mid-seasons. 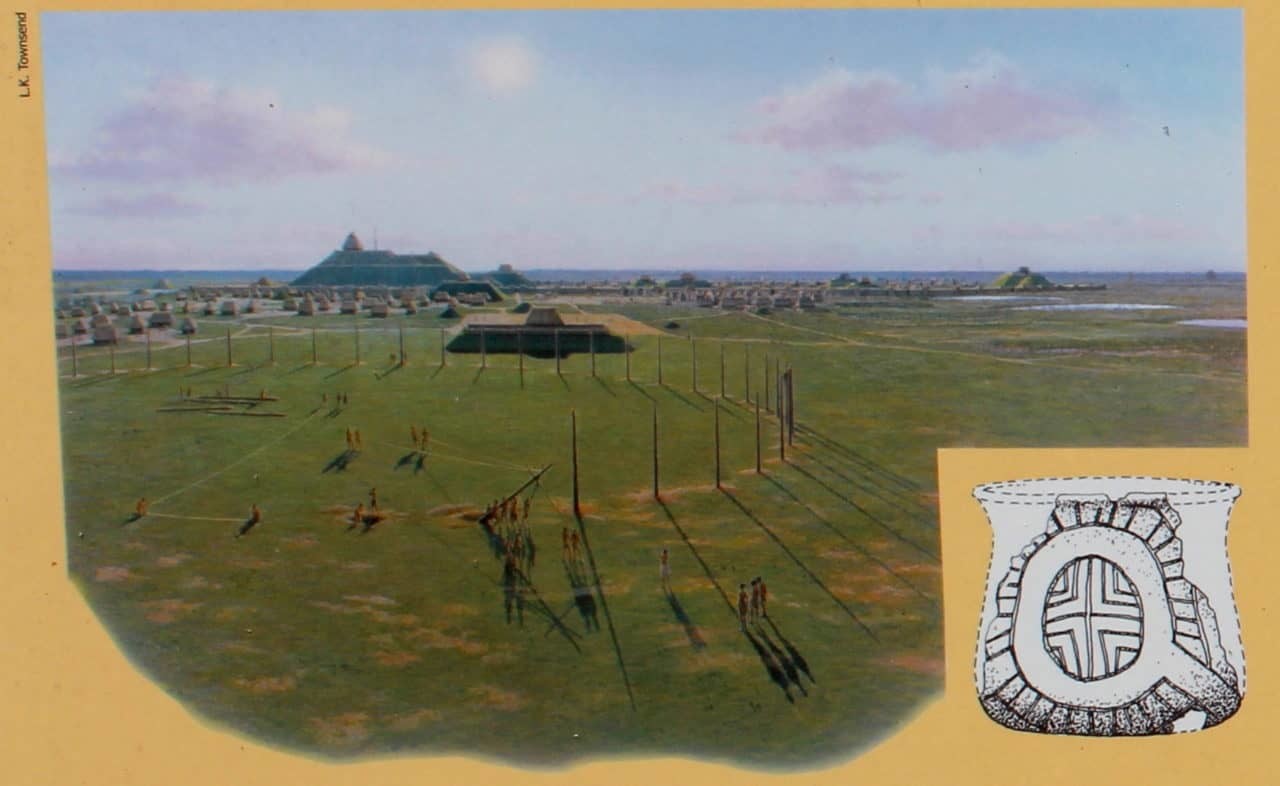 In 1961, Dr. Warren Wittry first discovered a set of 28 poles that stretched 410 feet in diameter. Four additional circles surfaced later. Of these five circular patterns built out of the red cedar (sacred to Native Americans), one set contains 24 posts, one has 36, one has 48, one has 60. The last circle, which has yet to be fully excavated, is made of 72 posts.

The burial complex in Mound 72 is one of the most significant discoveries at the site. Between 1967 and 1971, teams from the University of Wisconsin-Milwaukee excavated the ridgetop mound. Its length is about 140 feet, while the width and height are 72 feet and 10 feet, respectively. Within the mound, researchers found several smaller mounds that contained more than 250 skeletons. The Mississippians had covered those sub-mounds with soil and added another layer to give it its final outer shape.

The most important feature of Mound 72 is the central placement of a man and woman in a grave with a layer of more than 20,000 shell beads. The shells lay in the shape of a falcon or the “Birdman,” a powerful Sky Realm symbol and deity. Forensic work by Emerson et al. 2016 determined that a female lay under the shell bead layer, however, experts originally thought it was two males. Above the beads, the male lay atop the female. Interestingly, this configuration may allude to themes of cosmogenesis and fertility. Additionally, other skeletons and highly valuable grave goods accompanied the couple in the grave.

A reconstruction of the Birdman burial from Mound 72. Photo: Latin American Studies

Within other sub-mounds in Mound 72, researchers discovered numerous sacrificial victims and other individuals that suffered violent deaths. One of the mounds contained 53 young sacrificial females.

Experts also found that Mound 72 is aligned with Monks Mound along its horizontal axis and may have been a deliberate connection. Therefore, Cahokia’s people may have held the belief that spirits traveled along the axis to and from the Upperworld or “Sky Realm” (Romain).

What Happened to Cahokia Mounds?

Cahokia was not destined to last. Its collapse is somewhat of a mystery, however, based on research, the following three events may have had something to do with it.

1). Broxton Bird, a climatologist from Indiana University-Purdue University Indianapolis headed a study that he published in 2017. By taking ancient calcite samples in Martin Lake, Indiana, he and his team determined the precipitation levels throughout the years. Their results indicated that beginning around 1250 CE, climate change occurred. Consequently, this was the start of the Little Ice Age, which lasted 500 years. At that time, a dry period resulted. By 1350 CE, there was a serious drought brought on by dry arctic air.

Clovis People and Their Culture

2). Floods often go hand-in-hand with dry spells when large rainfall occurs during droughts. In another study, Samuel Munoz and Jack Williams took core samples up to 2,000 years old from two lakes in the Mississippi floodplain. They saw that prior to 600 CE there were many floods. Then there was a period of no floods until 1200 CE. During the floodless period, Cahokia flourished. After the flood of 1200, the population declined until complete abandonment.

3). The changes in the climate and the flood event may have severely affected corn production. Thus, famine and hunger would have inevitably led to major upheavals in the large population. As a result, Mississippian societies in the region began to collapse. The destruction of the palisades, an increase in sacrifices, and intensified warfare occurred after 1250 CE. By the end of the 14th century, residents had migrated south and east to areas with more stable climates.

Preservation of the Cahokia Mounds

The Historic Site in the state of Illinois protects more than 2,220 acres of the original 4,000 acres. This includes approximately 70 of the 80 remaining mounds. In 1964 the Federal Government designated the site as a Historical U.S. Landmark. Additionally, UNESCO named it a World Heritage Site in 1982. It is also home to the Museum Society which strives to promote the educational and scientific advancements of Cahokia Mounds.

Due to the vast size and organization of the city, early European settlers didn’t believe that the Mississippians could build such an astounding urban complex. Archaeology has taught us otherwise, and little by little, the true depth of their beliefs and way of life are slowly coming to light.

Hattusa: The Great Hittite City At The Edge...