Among the locals of the village of Thursby, on the outskirts of Carlisle, 74-year-old vagrant Charles Jevington was a well known and popular man. They usually referred to him with the affectionate moniker of ‘Old Charlie’. 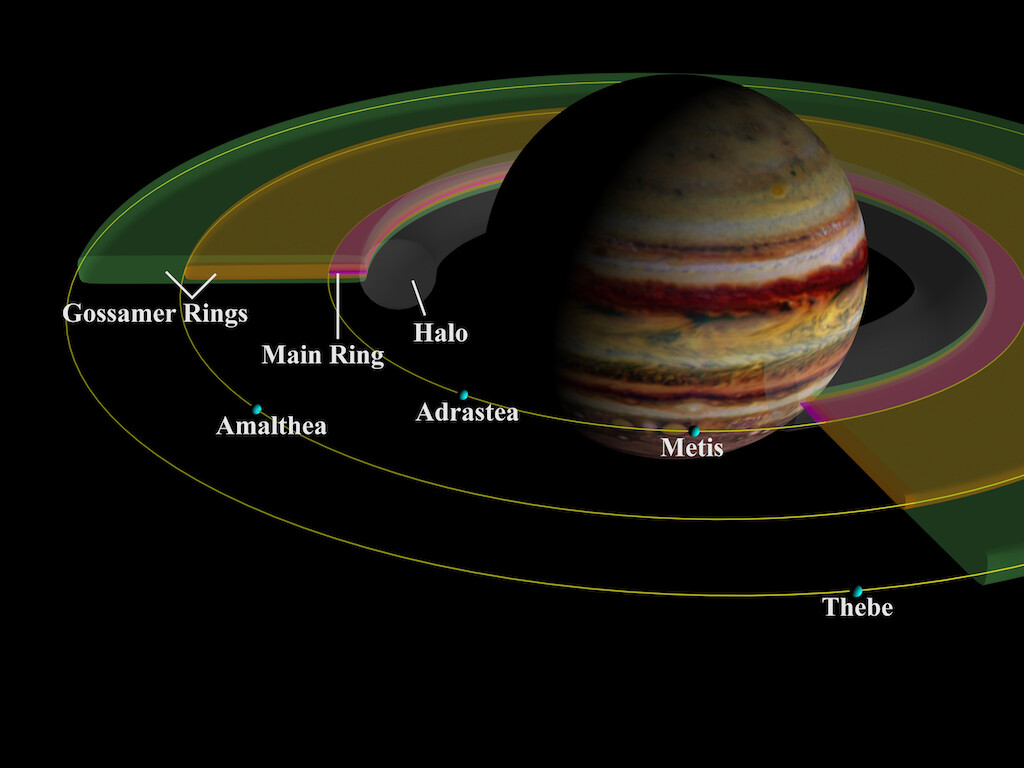 A schema of Jupiter’s ring system showing the four main components. Charles Jevington allegedly was the first to state all the gas giants had rings. Public domain image.

Sometime in May 1955, Old Charlie disappeared unexpectedly. The last reported sighting of him was made by a local farmer’s daughter Meg Compton. She said she saw him sprint across a field late one night towards a local woodland area with a haversack on his back. Once his disappearance was established, a police search began in earnest.

The local constabulary covered a search grid of 25 square miles without any success. When no trace of the man could be found, the police considered the possibility that Old Charlie had simply made his way towards the main road where he hitched a lift to York. It was generally believed that he had relatives living there. Under that assumption, contact was made with the West Yorkshire Police. Both forces worked in collaboration with one another and their combined investigations revealed that there were no relatives within the York area. With that line of inquiry exhausted, it still left the puzzle of where he had actually gone.

Just over five years later, in August 1960, an answer was forthcoming. It came from Old Charlie himself. He reappeared back in Thursby as if nothing had happened with a quite amazing account. It was only natural for someone to ask him where he had been for the intervening five years. Old Charlie explained that while he was strolling through the woods, he came across ‘one of those flying saucers’. Furthermore, he met and conversed with occupants who were collecting plant samples. They offered to take him on a ‘long ride’, as he put it and even delayed departure in order to allow him to retrieve some of his belongings.

All Outer Planets Have Rings

During this sojourn, Old Charlie explained how he was taken to many weird and wonderful words all across the galaxy. A local amateur astronomer who happened to be present clearly had trouble accepting this as truth, and he was alleged to have sarcastically asked if Old Charlie stopped off at Saturn on his way. Old Charlie refuted that but did reveal that all of the planets towards the edge of the Solar System had rings around them.

The astronomer’s raucous denial of such a thing wounded Jevington’s pride. The growing howls of laughter that filled the tavern had a negative effect on Old Charlie. When he announced that he was going to leave once more within a couple of weeks, he must have not appreciated the response. Charles Jevington stormed out of the tavern utterly humiliated.

Meg Compton was the only person seemingly unaffected by these claims, as she quickly followed him out. He refused her offer of a free meal, adamantly insisting that he would not be returning back to Thursby.

Within those couple of weeks, Jevington did indeed disappear again. And like he promised Meg, he has never returned.

These days, mainly thanks to NASA probes and space exploration in general, it is now a scientific fact that all the Gas Giants in the Solar System do indeed have rings around them. Only Saturn’s can be seen from the Earth. Did Old Charlie actually get to see and observe the outer planets and their rings years ahead of NASA? Or did he invent the whole thing and get lucky with circumstance? If he did invent a tissue of lies and deceit, then where was he for the five years he was absent?