Earlier in the year, I booked a visit to Cornwall, England. The historic region is an astonishing place to visit, boasting a rich pagan past and ceremonial druid sites of great significance. Bodmin Moor, near the center of Cornwall, is famous for its many eerie legends. It is also synonymous with the gruesome 19th-century murder of an 18-year-old girl, Charlotte Dymond. In this tale of love and jealousy, Matthew Weeks hanged for the crime, but many people believe that he was innocent despite the many details that seem to point to him. 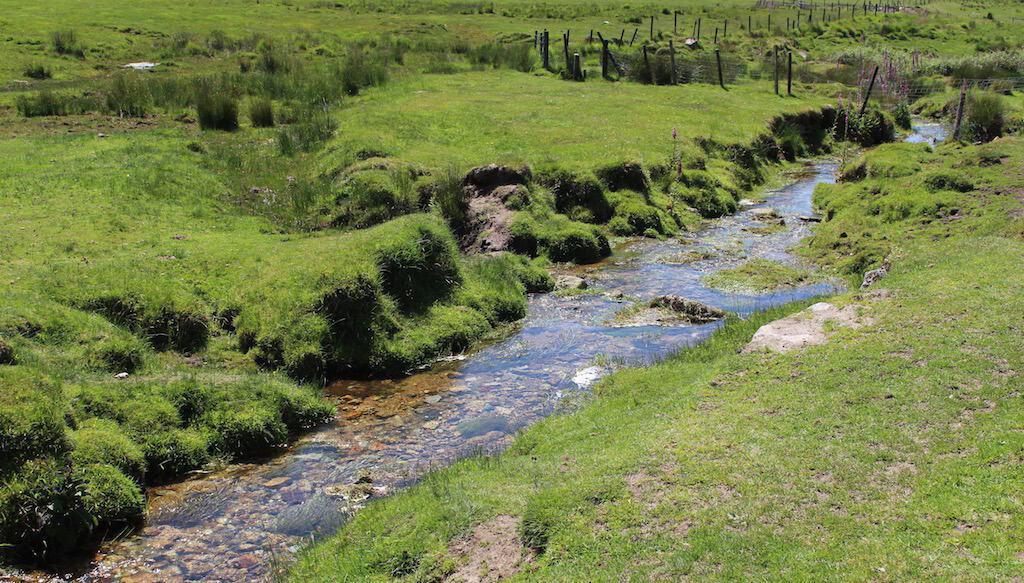 The site of Charlotte Dymond’s murder at the Alan river on Roughtor, Cornwall. Image: Historic Mysteries.

Matthew stood trial in August 1844 at Bodmin’s Shire Hall. The “Courthouse Experience” was one of my most memorable excursions in Bodmin and seemed to transport me back in time. I sat in the courtroom for a mock trial in a staged Victorian crown court where we would try the young man all over again for the murder of Charlotte Dymond. This was meant to be a fun and educational experience, but Matthew’s real ten hour trial, on the other hand, resulted in his hanging death on the drop gallows outside Bodmin Jail.

It all began in 1842 when a domestic servant named Charlotte Dymond started a job at the Penhale Farm that abutted Bodmin Moor. The farm was owned and operated by a 61-year-old widow, Mrs. Peter, and her son. In addition to Charlotte, there was a pair of other live-in farmhands that shared the work, John Stevens and Matthew Weeks, both in their early 20s. Weeks had worked the farm for seven years.

The town was aware that Charlotte and Matthew had been dating even before she started work at the farm. Matthew bore the scars of acne on his face and was quite an ordinary-looking man with a limp and several missing teeth. However, he did like to impress with his attire and usually dressed very well.

Weeks had a rival though. Thomas Prout was the nephew of the owner of the farm, and the 26-year-old often assisted with the work. Rumors suggested that Charlotte was promiscuous and tended to flirt at any opportunity. By all accounts, Weeks and Prout got on well together. The problem began when Prout took a fancy to Charlotte. The farm’s other worker, John Stevens, reported that Prout wanted to rescue Charlotte from her current life of labor and possibly elope with her.

Did Queen Elizabeth Murder for Love?

On April 14, 1844, Charlotte finished her shift on the farm. As it was a Sunday, she put on a fine dress with a red shawl. Matthew wore a collared shirt and clean stockings. Charlotte was seen having a private conversation with Thomas Prout, and soon after, she set off with Matthew. Isaac Cory, a 63-year-old man who tended farm in the region, said that he saw Matthew accompanied by a young lady in a green striped dress. It was foggy that day, but the farmer clearly recognized Weeks on the basis of the limp. Everyone assumed that Charlotte was with him at this time since they left together.

When Weeks returned to the farm later that day, he was alone. Mrs. Peter quizzed him about Charlotte’s whereabouts, but he pretended to be ignorant and said he didn’t know. Weeks’ stockings were covered with mud up to the knee. John Stevens also noted that his shirt revealed new tears and a missing button. Over the course of several days, there was still no sign of Charlotte. Weeks insisted that he had been nowhere near the moor. Suspicions among the staff were growing, and in their eyes, Weeks was certainly guilty. Several days after Charlotte disappeared, Weeks said that Charlotte had taken a job offer in Blisland, some miles away.

Ten days after Charlotte vanished, concern was at fever pitch. The villagers organized a search. Additionally, they investigated the offer of a new job and scoured the room of Matthew Weeks for any evidence. There was nothing indicating guilt in Weeks’ room, however, the job offer that he had mentioned was found to be a false claim.

The search resulted in the discovery of a body. It was Charlotte lying flat on her back at the banks of the River Alan. Her throat had a slash that was eight and a half inches across, and the wound was so deep that a couple of her vertebrae had partially separated. Evidence indicated that someone had initially made one cut across her throat and then inserted the blade into the wound to take another slice to finish the job. Police issued a murder warrant for Matthew Weeks, but nobody was able to find him. An investigation into his whereabouts finally located him in Plymouth at his sister’s house. That was all the confirmation the authorities needed. It appeared that Matthew had murdered Charlotte and fled.

The Skull of Bella in the Wych Elm

Weeks was brought back to Bodmin Assizes, and there he was tried for murder. His testimony had changed several times and the details he gave were unsubstantiated. Additionally, two more witnesses came forward placing him with a woman of Charlotte’s description. Boot prints near the crime scene also matched up to Matthew’s boots. It took the jury only 35 minutes to return a verdict of guilty.

The judge sentenced Matthew to death, and he was hung at Bodmin Jail on August 12, 1844, in front of roughly 20,000 people who had come from all over the countryside. One detail that surfaced during the investigation was that Charlotte had plans to meet with Thomas Prout at the Tremail Chapel later in the evening sometime after she left the farm with Weeks. In fact, this was enough to cause many people to believe that Matthew Weeks was innocent and that he was unjustly hanged. It is for this very reason, they say, that his angry ghost roams the area around the jail in search of justice. The front of Bodmin Jail where Matthew Weeks hung for murder. CC2.0 loulrc.

Just before Matthew was hanged, he dictated a letter, and this is what it read:

“I hope young men will take a warning by me and not put too much confidence in young women, the same as I did; and I hope young females will take the same by young men. I loved that girl as dear as I loved my life; and after all the kind treatment I have showed her, and then she said she would have nothing more to do with me. And after this was done, then bitterly I did lament, thinking what would be my end. I thank the judge and jury too, for they have given me no more than was my due.”

Many people believe this was a confession.

Charlotte’s tragic murder and Matthew’s subsequent hanging caused a great commotion across the country. Shortly after the sensation quieted, the people of Bodmin erected a memorial to Charlotte Dymond. The tall granite obelisk still stands today at the site of her murder and reads, “This monument is erected by public subscription in memory of Charlotte Dymond who was murdered here by Matthew Weekes on Sunday, April 14, 1844.” 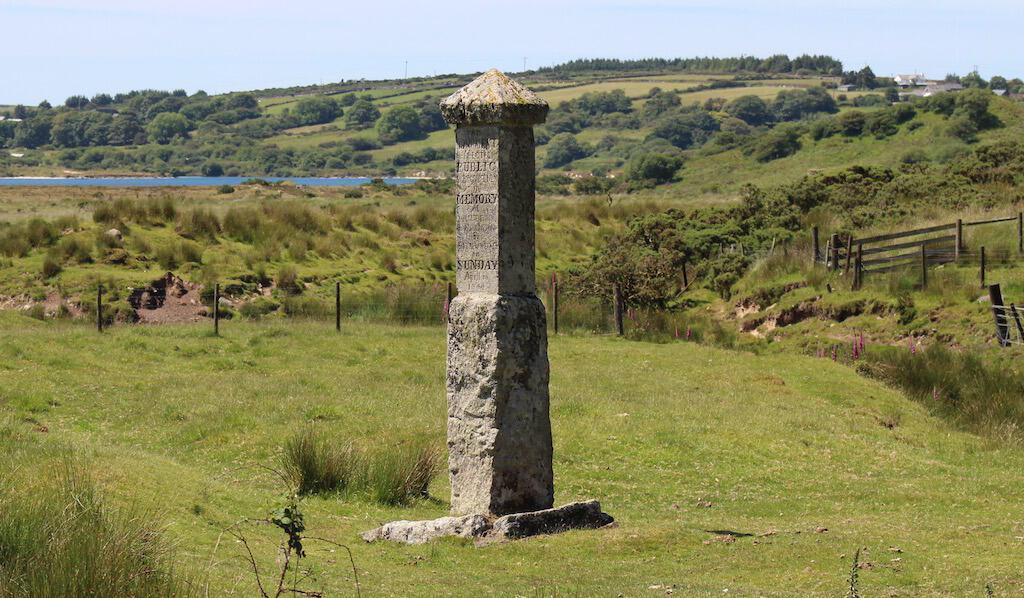 Works on the Charlotte Dymond Murder

The Charlotte Dymond tragedy touched many people deeply, and the tale has become an integral part of Bodmin, inspiring a number of poems and songs. The following is a small excerpt of a poem called The Ballad of Charlotte Dymond, written by Charles Causley of Cornwall, who was born in 1917.

Charlotte walked with Matthew
Through the Sunday mist,
Never saw the razor
Waiting at his wrist.

Charlotte she was gentle
But they found her in the flood
Her Sunday beads among the reeds
Beaming with her blood.

Matthew, where is Charlotte
and wherefore has she flown?
For you walked out together
And now are come alone.

The Carrivick Sisters also performed a song about Charlotte Dymond and Matthew Weeks.

Verdict at the Mock Trial

We jurors had less than an hour to hear all the details of Charlotte Dymond’s murder. Everything seemed to point to Matthew’s culpability, and we issued the verdict of “guilty.” If Matthew continues to wander these halls, there is no doubt that his curse is the utter hell of having to relive his sentencing over and over again. As for Charlotte, legend tells us that her troubled spirit wanders around the moorlands on every anniversary of her murder. She continues to wear her Sunday best.

The Mystery of Who Put Bella in the...