For more than 400 years, the bones of Nicolaus Copernicus were lost to history. When he died in 1543, he wasn’t terribly famous. The well-educated Polish scholar lived his life as a mathematician, astronomer, economist, doctor, and canon in the Frauenburg cathedral (today called Frombork) about 200 miles north of Warsaw. After his death, he was buried in an unmarked tomb below the floor of the basilica where he had worked. In time, the exact location of his remains was forgotten. Since then, a number of people, including Napoleon and the Nazis, attempted to find his grave, but to no avail. Then in 2004, a team of Polish scientists embarked on an incredible investigation that would eventually solve the Copernicus Grave Mystery.

Painting of Copernicus from Town Hall, Torun, 1580, based on a self-portrait. Artist unknown, public domain.

How Copernicus Became a Heretic

Copernicus achieved honor only well after his death. In fact, many of his contemporaries deemed him a heretic. His eventual claim to fame was the idea that the Earth and other planets revolved around the Sun – the heliocentric theory. The prevailing belief, which the Roman Catholic Church also held, was that all celestial bodies revolved around the stationary Earth, which lay at the center of the universe – the geocentric theory. Realizing that his ideas contradicted the popularly-held views of the time, Copernicus was somewhat cautious. Only just before his death, he published De revolutionibus orbium coelestium (On the Revolutions of the Heavenly Spheres). 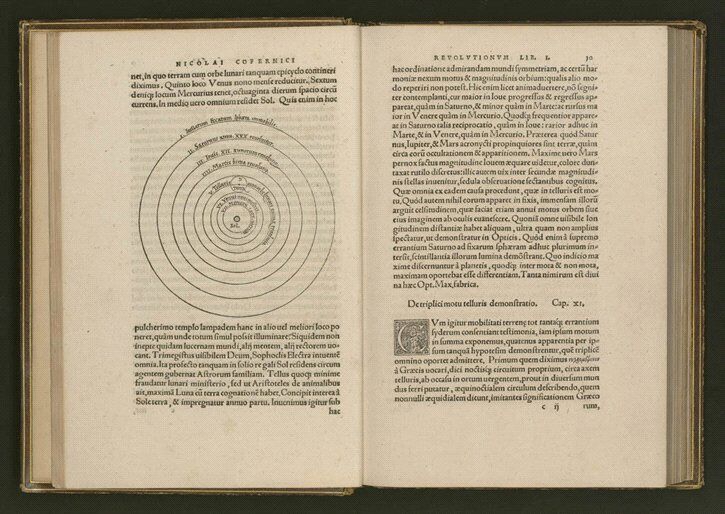 Left page shows Copernicus’ heliocentric theory of the universe with the Sun at its center. Source: Library of Congress.

Because Copernicus’ ideas were so radical and confounding, the publication was received as somewhat of a ridiculous joke. Without the author alive to denigrate, officials paid little attention to its contents at that time. However, as the years passed, other scientists began to proclaim their support for the Copernican theory. The momentum posed a threat to the longstanding theological beliefs in geocentrism.

More than 70 years after the publication, officials publicly labeled Copernicus as a heretic. They also called his theories blasphemy because the concepts contradicted the scriptures. On March 4, 1616, On the Revolutions of the Heavenly Spheres wound up on the Roman Catholic Church’s List of Forbidden Books pending “corrections.”. There it remained until 1748 when Pope Benedict XIV removed it from the list.

Meanwhile, Copernicus’ grave lay somewhere under the Frombork cathedral amongst more than a hundred other tombs. Swedish invaders had plundered the crypts below the cathedral in the 17th century, and there was additional damage during WWII. Thus, what remained below the church by the time Polish scientists began excavations in 2004 was a jumble of scattered bones. The investigators reasoned that since Copernicus was responsible for the St. Cross altar during his life at the church, perhaps he was buried in its vicinity.

Then in 2005, they discovered a skull near the altar. Although it was missing the lower jaw, the skull revealed a broken nose and belonged to a man between 60 and 70 years old. Copernicus was 70 at the time of his death. Could this be the Copernicus grave? Experts at the Central Forensic Laboratory of the Warsaw Police generated a computerized reconstruction of the face and compared the results with copies of Copernicus’ own self-portrait. The reconstruction (below) revealed a man who looked like Copernicus, including a scar on his forehead. (National Institutes of Health).

DNA analysis of the skull’s molar teeth matched with two femurs found nearby. However, researchers were unable to locate any remains of Copernicus’ relatives. Unfortunately, this meant that they had no reference from which to conclusively identify the skeleton.

With a bit of genius and perhaps a stroke of luck, investigators found what they needed. However, first, a little background is necessary. During the Second Northern War of the mid-1600s, a deluge of invasions by Swedish forces devastated Poland and left palaces, castles, entire towns, and churches in ruins. The troops took everything of value back to Sweden, where most of Poland’s riches remained. (Polish History Museum).

The Frauenburg cathedral, where Copernicus studied and made his celestial observations, also suffered valuable losses. Among the libraries that the Swedish forces plundered from the church was a manuscript that Copernicus had owned for much of his life. It was the Calendarium Romanum Magnum, created by Johannes Stöffler in 1518. This new celestial chart would become the basis for the Gregorian calendar that we still use today. Copernicus used the chart extensively as an astronomical reference, and there was a possibility it contained some of his DNA. If experts could find a match to the DNA they took from the skull and teeth, perhaps they could make a positive identification.

Over the centuries, the Calendarium lay at the Uppsala University Library in Sweden. Göran Henriksson, an astronomer at Uppsala, carefully inspected the pages of the Calendarium on which Copernicus had scribbled his notes. He discovered nine hair samples that subsequently went to the lab for analysis.

Four of those hairs provided DNA results. Two of the four hairs contained DNA that matched the DNA of the molars taken from the skull believed to be Copernicus. It appeared the scientists had found the Copernicus grave, and in 2008, they announced their discovery to the world.

From Heretic to Hero

In May 2010, 467 years after his death, the celebrated astronomer and national hero of Poland was once again laid to rest at the Frombork cathedral. This time high church officials gave him a formal memorial service, said their prayers, and blessed his remains with sprinklings of holy water. Then his polished sarcophagus led in the procession to its final resting place under the floor of the St. Cross altar. Above his crypt, a black granite tombstone (shown on right) with a model of the solar system and a large gold Sun at its center marks the grave. The inscription proudly identifies Nicolaus Copernicus as the founder of the heliocentric theory. Visitors can peek at Copernicus’ grave through the window at the base of the model.

Today, visitors to the beautiful Frombork cathedral will be able to easily find the Copernicus grave. Once deemed a heretic who’s body vanished in history, Copernicus now rests in honor as a national hero.

You may also like: The Tomb of the First Emperor of China

Fixing the New Year: How We Left the Lunar Calendar Behind