Kinbane Castle and the MacDonnell Clan of Antrim, Northern Ireland

Along the magical coastline of County Antrim in Northern Ireland, Colla MacDonnell of the great Scottish MacDonnell clan built Kinbane Castle in 1547. Also known as Kenbane, the castle now lies in ruins on a rocky peninsula that juts out into the sea. The word Kinbane derives from an Irish word, An Cionn Bán, meaning White Head. This term refers to the white limestone under the structure. Although this castle is not as famous as many others in the area, it is still an important reminder of Northern Ireland’s turbulent history: a time when the MacDonnell clan reigned Antrim.

The history of the MacDonnell (or MacDonald) clan is a fascinating one. Their lineage goes back to the Viking invasions of the Isles of Scotland and involves many clan intermarriages since that time. It was during the first century that both Irish Gaels and Vikings invaded Western Scotland and its islands. The MacDonalds (the anglicized name for the Gaelic Mac Domhnaill) from the Isles of Scotland branched off from Clan Donald of the Scottish highlands. Clan Donald descended from Clan Somhairle. According to DNA testing, the founder of the Somhairle clan, Somerled, had Norse blood from his paternal side. He also married a woman of Norse royalty. 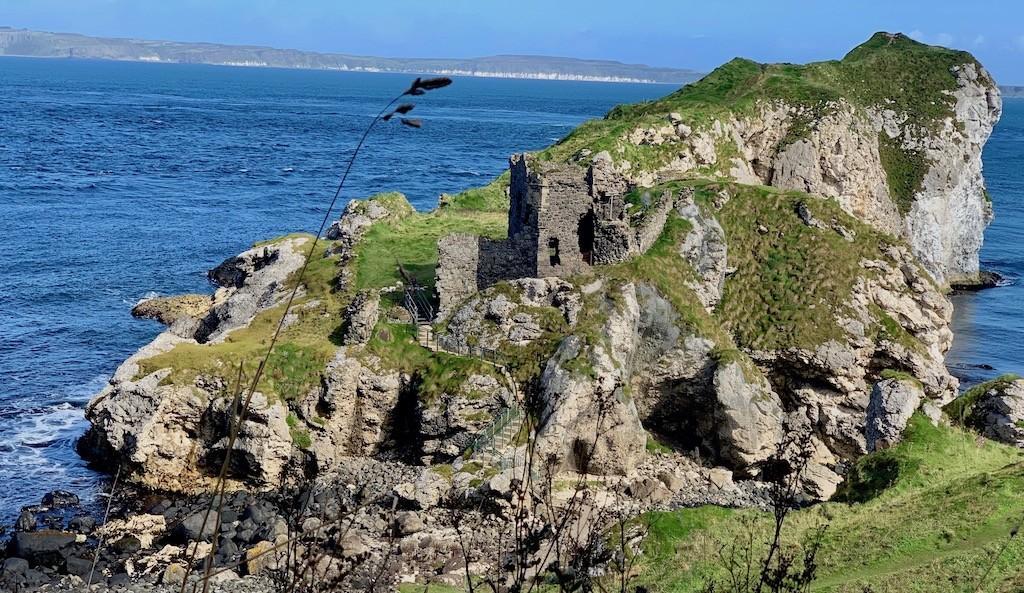 Historians know that the MacDonnell clan were gallowglasses, the highly elite group of mercenaries descended from Norsemen who intermixed with the local Gaelic people. These gallowglasses, or gallóglaigh, as the Irish called them, were aristocratic and noble professional infantry warriors. They were famous for their unflinching bravery, brutality, and strength in battle. 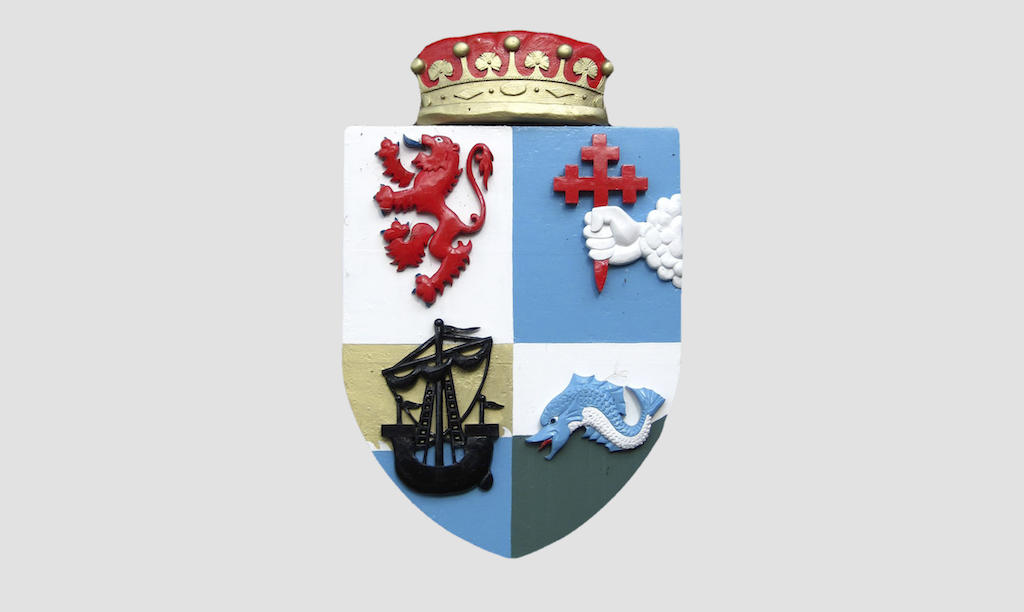 Antrim’s MacDonnell clan descended from the noble MacDonnells of Islay and Kintyre. In 1399, John Mór Tanister MacDonnell moved to Ireland either to flee the wars in the Scottish Isles or because he was hired as a professional gallowglass. He married an Irish noblewoman, Margery Byset (also Bissett). Her family owned the Glens of Antrim, a spectacular region of the far northeast of Northern Ireland.

In the first half of the 16th century after the Byset family had become weak due to years of wars, the MacDonnells used John and Margery’s marriage to lay claim to the Lordship of the Glens. By most accounts, this is how the MacDonnells took possession of Antrim. James MacDonnell, the son of Alexander MacDonnell (Lord of Islay and Kintyre), became Lord of the Glens of Antrim around 1539.

The Route and Colla MacDonnell

West of Antrim, the MacDonnells also conquered a tract of land called The Route from the Irish MacQuillan clan. When James went back to Scotland a number of years later, he gave Colla, his younger brother, the title Captain of The Route and the ability to govern the Glens of Antrim in his absence. Described as a “dark-haired, gigantic chief,” Colla was one of the most respected of the MacDonnell brothers at the time.

This third son [Colla] of Alexander Macdonnell was one of the most distinguished of the six brothers. . . . He had evidently made himself formidable in the eyes of all English officials.

Colla married Evelyn MacQuillan of the MacQuillin clan, which may have brought a short alliance between the two warring groups. In 1547, Colla built Kinbane Castle as his base. This was the perfect place from which he could control The Route on land and the sea routes between the Scottish Isles and Antrim.

Kinbane has a special place in the MacDonnells’ history in Antrim. Most of the castles the MacDonnells possessed in Northern Ireland came through conquests, including Dunluce, Dunaneeny, and Red Bay Castle. Those castles previously belonged to other clans. However, Colla took advantage of the ideal location and built Kinbane himself. 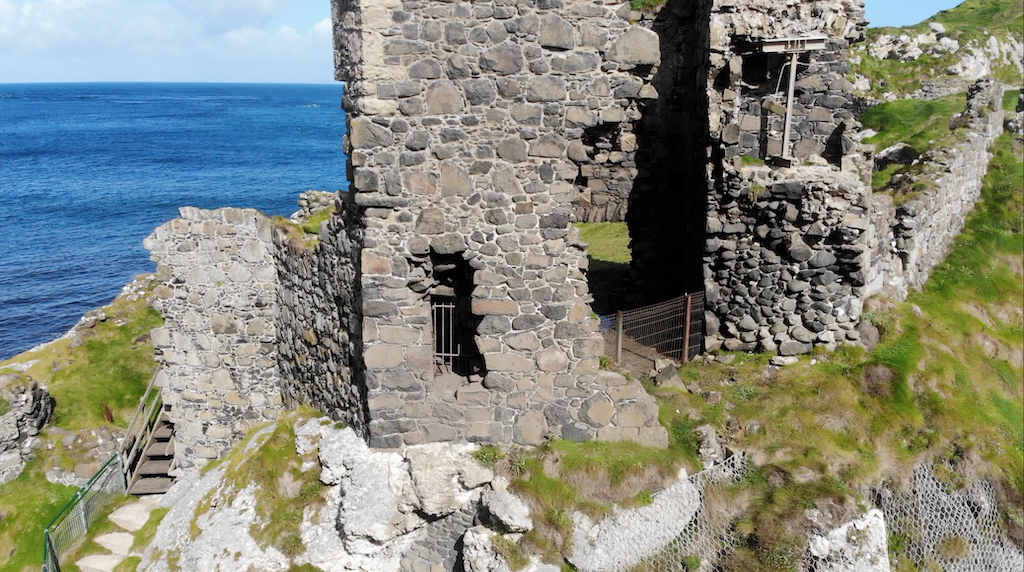 The castle is off the beaten track and very little of the original structure remains today. Photo: Historic Mysteries.

Originally, the castle featured a protective wall, two-storied tower, courtyard, guardroom, and possibly an attic and other wooden structures. At the farthest point of the promontory, archaeologists found evidence of previous fires. This is probably the signaling point where Colla lit fires when English forces were besieging the castle (more about this later).

Within the courtyard, further excavations revealed more signs of charring, burnt medieval pottery, animal bones, and household garbage. However, there was no evidence beyond the 16th century, which leads experts to believe that the castle may not have been regularly inhabited after the English sieges of the mid-1500s. (Visitors’ information board at Kinbane Head). 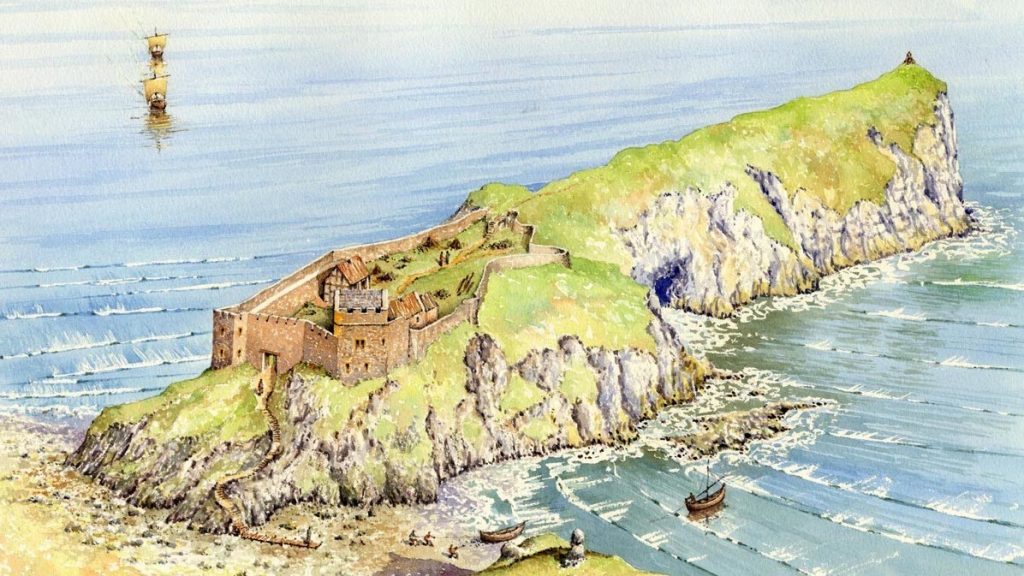 Reconstruction of Kinbane Castle by artist Philip Armstrong. Photo of visitors’ board at Kinbane.

English Attack in the Northern Channel

The rapid rise of Macdonnell clan power in Northern Ireland was a major concern for the English. The Brits had aimed to subdue Ulster and eventually make loyal subjects of its people. But the presence of the MacDonnells complicated matters, and the English decided that they needed to eliminate the clan. Additionally, as a result of conquests, the MacDonnells had amassed a huge amount of booty that they stored on Rathlin Island, just across the channel from the Kinbane peninsula.

In 1551, the English, under the direction of Sir James Crofts, sent four large ships filled with soldiers into the North Channel heading for Rathlin and the booty. In the meantime, Crofts led his own troops on land into the North from Dublin. The fact that the MacDonnells were gallowglasses meant that they could quickly call upon troops of other gallowglasses to join their efforts to fight. This allowed the Scots to successfully defend Rathlin Island, and the English lost many lives there.

While the MacDonnells were defending Rathlin, across the channel, other English troops were destroying parts of the castle at Kinbane Head. After the battle, Colla rebuilt the fortifications. But again in 1555, the English laid siege and caused significant damage to the castle structures with cannonball fire. “The open area of shore between the cliffs and the promontory is known as Leg-na-Sassenach (an anglicized version of the Irish Lag na Sasanach,  meaning ‘hollow of the English’). According to local legend, the name comes from an incident involving an English garrison which had laid siege to the castle from the base of the cliffs” (Visitors’ information board at Kinbane Head). 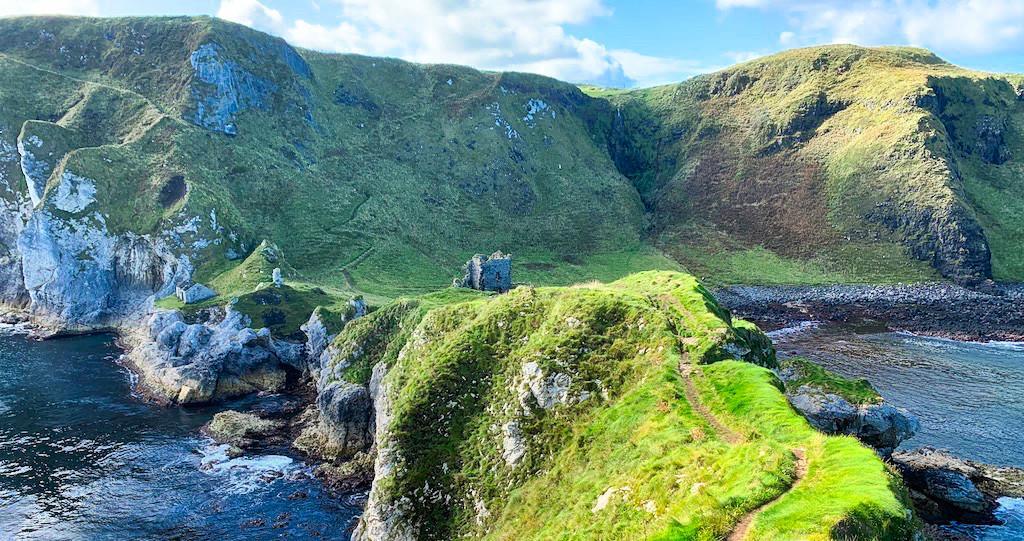 Looking back at the Leg na Sassenach and the castle from the point. Photo: Historic Mysteries

One story relates that during the raid, defenders of the castle lit a fire on the point of the peninsula to notify neighboring clans. Coming from all directions to help, they surrounded and massacred the garrison of English in the Leg-na-Sassenach. Another version says that the allies rolled large stones down from the tops of the cliffs and killed the Englishmen.

Colla MacDonnell died at Kinbane castle in May of 1558. The role of Captain of The Route passed on to Colla’s younger brother, Sorley Boy.  Famous in his life for resisting the English, Sorley made brilliant alliances and mobilized strong forces. He had amassed a significant amount of power and fathered many children. Thus, he is the true founder of the MacDonnell clan in Antrim. Incredibly, he lived to a ripe old age well into his eighties.

The MacDonnells gifted Kinbane Castle to the Scottish MacAllister clan for their loyal alliance. It stayed in their family until the 18th century. However, it is not clear if they actually occupied it or for how long.

Most of whatever remained of the castle has collapsed due to erosion and instability. Today, anyone can find the castle with a simple GPS search. There is an ample parking lot at the top of the cliffside. Take note, there are many steps down the steep hill to the peninsula. Nonetheless, the site is awe-inspiring, not for the humble remains of the castle, but for the incredible natural beauty and history of the McDonnell clan that once reigned over the sea and lands of Antrim.