Attack on Lady Florence Dixie: “Saved by Her St. Bernard”

In the 19th century Scotland, society expected women of the upper-classes to follow a strict set of rules that made them virtual prisoners of the high society standards of manners and courtship. Lady Florence Dixie (1855 – 1905) broke that mold repeatedly. 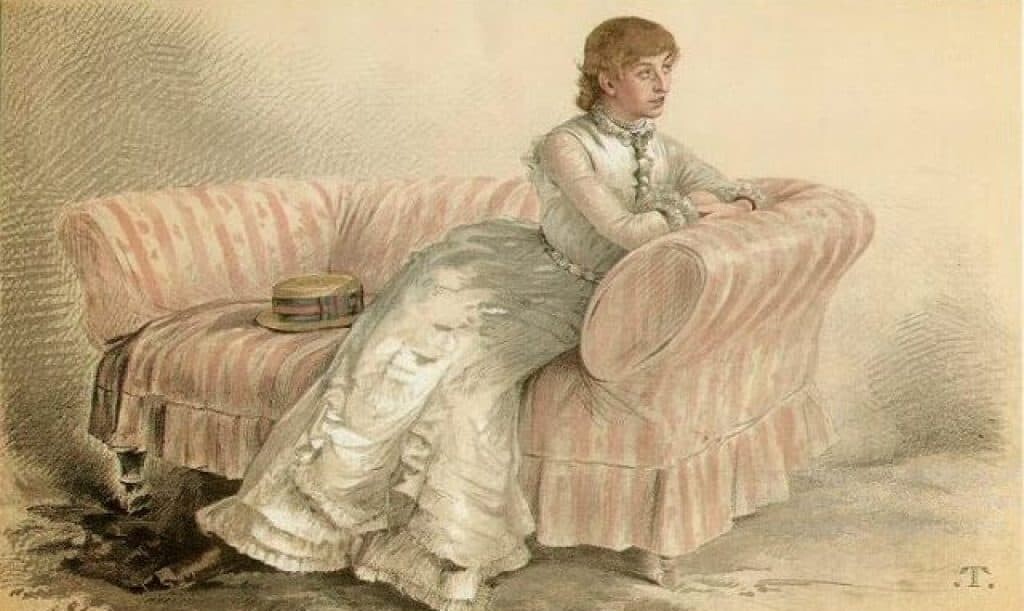 The Life of Lady Florence Dixie

Born in Dumfries, Scotland, Florence had a father who was the Marquess of Queensbury and a mother whose own father was a member of Parliament.

She led a remarkable life including the founding of a women’s soccer team and authoring novels that were slim disguises of her feminist and women’s rights agenda. She married, as expected, but those who knew the couple were quite certain that Florence ruled the household, her husband, and their two sons. The couple enjoyed outdoor pursuits and adventures and shared a love of liquor, earning them the nicknames “Sir Always and Lady Sometimes Tipsy”.

Florence Dixie Ahead of Her Time

She wrote travel essays that she is quite famous for, such as “Across Patagonia,” after a six-month expedition there. She also expressed her views about the possibility of Home Rule for both Scotland and Ireland.

Florence made her name for her gregarious activities and seeming recklessness to take on any adventure that caught her fancy.

But today she may be best known in certain circles for an alleged attack perpetrated by members of a faction of society that did not approve of her attempts to bring equality to women and England’s bordering countries.

In early 1883, when they were back in England, Lady Florence unwisely started to meddle in Irish politics, condemning the Fenians with great vehemence. After she had allegedly received several death threats from the enraged sons of Erin, Sir Beaumont decided to purchase a large St Bernard dog, named ‘Hubert’, to serve as his wife’s bodyguard.

The Purported Attack on the Lady

These are the circumstances of the crime of March 17, 1883, as she detailed in an account that she passed along to newspapers:

“I was out walking near the Fishery last evening, about 4:30, when two very tall women came up and asked me the time. I replied that I had not got my watch with me, and, turning, left them. Opening a small gate which led into the private grounds of Capt Brocklehurst…I made toward a stile, and was just going to get over, when I heard the gate open behind, and the two women followed me in. Somehow or other I felt all was not right, so I stopped and leaned against the rails, and then, as they came on, I went to meet them.

One on the right came forward and seized me by the neck, when by the strength of the clutch I felt it was no woman’s power that pulled me down to the ground. In another second I saw the other would-be woman over me, and remember seeing the steel of the knife come right down upon me, driven by this person’s hand. It struck through my clothes and against the whalebone of my stays, which turned the point, merely grazing the skin. The knife was quickly withdrawn and plunged at me again. I seized it with both hands and shouted as loud as I could, when the person who first pulled me down pushed a large handful of earth into my mouth and nearly choked me.

Just as the person wrenched the knife from my hands, a very big and powerful St. Bernard dog I had with me broke through the wood. The last thing I remember was seeing the person with the knife pulled backward by him. Then I heard a confused sound of rumbling of wheels, and I remember no more.

When I came to myself I was quite alone. From what I saw of the knife I believe it to be a dagger, and the persons were undoubtedly men. They were wearing (women’s) clothes, and were unnaturally tall for women; the one who stabbed me had on a thick veil, reaching below the mouth; the other was unveiled, but his face I did not notice much. This is all the information I can give. My head is very confused and painful, and I expect they must have stunned me. This is a wretched scrawl, but my hands are very much cut, and it pains me so much to write.”

Newspaper Articles of the Attack in 1883

The following pictures about the attack on Lady Florence Dixie emerged in The Graphic in 1883. The purported crime made not only a national celebrity of Florence but also of the dog Hubert. The faithful canine was the star of dog shows, and a photographer, Mr. Snook, took a photograph of Hubert and sent it, along with an autograph (presumably Hubert did not make it himself), to Queen Victoria.

I owe my life to this Mount St Bernard dog!

Was it Fact or Fallacy?

Naturally, the police stepped in to investigate such an outrageous crime against Lady Florence Dixie. She was a woman of good standing, but doubt started to creep in from the earliest moments of the investigation.

First off, nobody had seen the two attackers, even though visibility was good at the time of the crime. Secondly, Florence’s clothing was spotless, which no doubt should have been dirty when her assailant threw her to the ground. Also, nobody heard Florence scream or Hubert bark.

Suspicion ran rampant and some people believed that a drinking habit or the possible occurrence of hallucinations were at the heart of the attack on Lady Florence Dixie. The supposed heroic dog also became an object of doubt, leading to sarcastic rhymes such as:

“So thou art Hubert, canine stout,
Whose teeth — good gracious, what a row!
Put banded murders to rout.
(At least we are told that this was so.)

The massive throat bayed noble rage
As at the dastard pair you flew,
Just like a dog upon the stage!
(That is, if what’s been said is true).

It would take years and several lauded books and noble incidents for Florence to recover her good name. There is no mention of later years of Hubert. By the time of her death in 1905, everyone seemed to have forgiven the attack on Lady Florence Dixie. In her passing, they mourned her with complimentary testimonies.

She undoubtedly felt that it would be best if everyone forgot about her adventure in March of 1883, but the story lives on.