Picture sheets of ice covering the Earth, changing shorelines and carving giant canyons and lakes out of miles of rock and that is an ice age. That is part of the cool thing about ice ages. The dramatic depictions of them in film and educational videos are pretty accurate. They are epic. The Earth’s temperature drops, glaciers spread and havoc is reaped upon anything that gets in their way. The Little Ice Age was not like this. In fact, it was not even technically an ice age, but there was certainly a cooling trend and some impending glacial doom that thankfully subsided.

The Little Ice Age saw some glacial spreading, but the cooling trends do not appear to have been a synchronized global event. During the estimated period, different areas got colder at different times. Initially, it was thought this only happened in the Northern Hemisphere, but still existing ice gives us evidence that is not the case. The cooling began some time around 1350 and lasted until 1850. However, there is no consensus on the start date. It could have been as late as 1650. 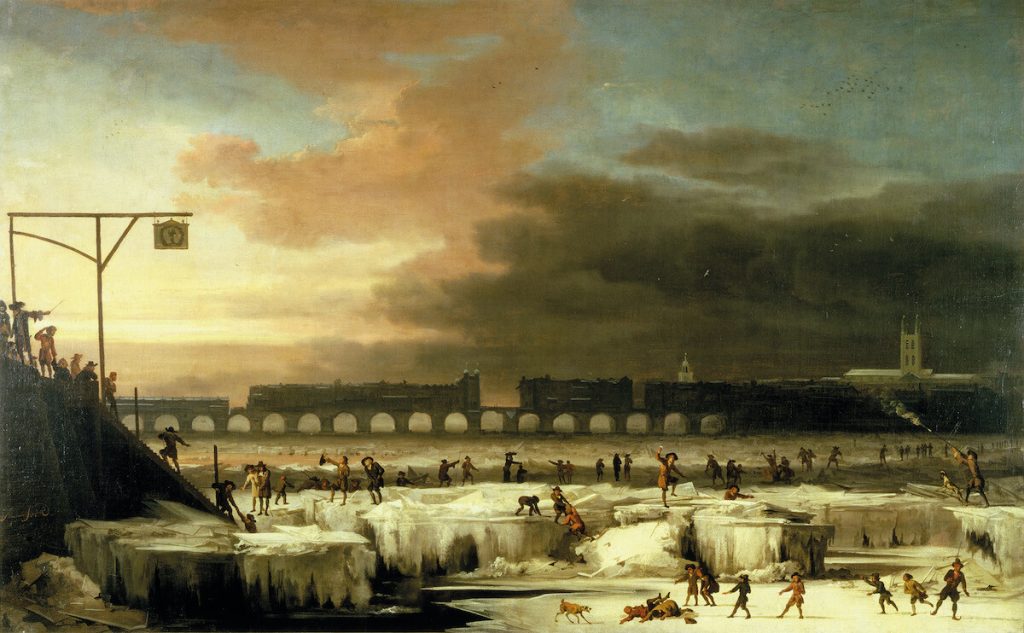 The Thames River frozen over, painted by Abraham Hondius in 1677. What caused the Little Ice Age?

No matter when it began or ended, the Little Ice Age did happen. The problem is that no one is quite sure why. Several possible explanations have been presented, and, of course, more than one may have been responsible for the event. In other words, one major factor could have changed the climate or it could have been several small factors combined. The results of the cooling are undeniable. People left behind records like maps, art and writings that clearly show freezing, glacial movement and snow when and where they should not have been. New York Harbor froze enough to be walked across, the Thames froze a few times, people were pushed off their land by glaciers (imagine that) and even the freezing of Niagara Falls in 1911 may have been due to some residual cooling. The Little Ice Age influenced a lot of things, but what influenced it?

According to paleoclimatologist William F. Ruddiman, the widespread cease of Native American civilizations decreased the CO2 levels in the atmosphere, thus causing the Earth to cool. This was because they reportedly set huge forest fires regularly, and when they were not around to set them, the forest quickly grew back. Trees eat up CO2 and release oxygen, so this is one possible explanation for the Little Ice Age.

Volcanic activity is known to be able to cause cooling. The ash blown out of a big eruption can partially block out the warmth of the sun for months to years. The eruption of Mount Tambora did just that in 1815. 1816 was called The Year Without a Summer because of it. While this happened during the Little Ice Age, it clearly did not cause it. It was a contributing factor for cooling while the ash was in the atmosphere, but it would take a lot more than that to have kept the Earth cooler for hundreds or even just tens of years.

The Earth’s axis and orbit play a crucial role in the Earth’s climate. In fact, these mechanisms are responsible for some cooling in the northern hemisphere for roughly 2,000 years. The Little Ice Age may have been part of this, with something else leading to a warm up in the late 18th, early 19th century.

Anyone who has seen the film “The Day After Tomorrow” knows that fresh water in the ocean is bad for the climate. Of course, reality is not nearly as rapid as that film, but it gets a few things right. We are at the mercy of global ocean currents as much as we are at the mercy of the sun. A slow down of the circulation of the currents that carry warm and cool water can cause the Earth to cool down. This is strongly influenced by the levels fresh water in the ocean. Therefore, glacial melting in the Medieval Warm Period could have led to the Little Ice Age.

Despite all of the postulation over shifting global climate, there may be a very simple explanation for it in regards to the Little Ice Age. It could simply be part of a natural cycle. There is no doubt that certain sudden or gradual events can wreak havoc on the temperature of the planet, but it is also certain that no such force is necessary for a change. However, whether a change as big as the Little Ice Age is possible without help is uncertain.