The Moorgate train crash took place on February 28, 1975, at 8:46 am on the London Underground’s Northern City Line. Sadly, 74 people were badly injured and 43 people lost their lives. The Department of the Environment conducted an inquiry into the crash and determined that there was nothing mechanically wrong with the train. It was the bizarre lack of any action on the part of the driver, Leslie Newson, that caused the crash. However, the post-mortem examination of the driver showed no medical reason to explain the tragedy, nor had he displayed any suicidal tendencies leading up to the wreckage. So, what was going on with Newson on that fateful day?

Emergency personnel comb through the wreckage.

The London Underground became the very first metropolitan subterranean railway system in the world back in 1863. Although this concept for a transportation system was first proposed in the 1830s, permission to construct was only granted in 1854. The first trains were powered by steam. It was only during the 1890s that the entire system switched to electricity and became the clean and environmentally friendly travel that commuters have become accustomed to in many major cities across the world.

Over the years, the London Underground, or the Tube as commuters prefer to call it these days, has expanded to cover the whole of London and selected parts of the Home Counties. From a single line that went east to west, the system now operates 11 different lines. One of the key areas of the entire network is Kings Cross, the scene of a devastating fire in late 1987. It was a situation that sharply brought into focus the outdated safety measures of the time. However, that was not the only tragedy, nor the biggest, to befall the London Underground network. On February 28, 1975, the Moorgate train crash occurred inside a tunnel just outside the station during the morning rush hour and became London Underground’s worst peacetime disaster.

At 8:38 that morning, a Northern Line train, number 272, departed from Drayton Park a single minute late. By the time it made an approach to Moorgate Station, there were 300 passengers on board. London Underground’s recommendations to the approach to a station on the Underground network is to reduce operating speed to 15 mph. The passengers on the platform waiting for the train at Moorgate reported that the train continued onwards at a speed between 30-40 mph without stopping. Some witnesses also believed that it was accelerating.

London Underground had measures put into place if just such an occurrence was to ever take place. Using a device they dubbed ‘Sand drag’, any carriages that might be out of control were automatically diverted onto a siding or less dangerous track. This system is effective against any unauthorized vehicles that could potentially threaten scheduled services. Train 272 plowed on through this design and collided with buffers before striking the solid concrete wall beyond.

First responders to the scene initially thought that a four-car train had slightly overshot the platform. All it needed was to be put back into position. It was only when they worked their way along the tunnel that the situation was declared an emergency. The force of the impact crushed the first two and a half cars of the train into half their proper lengths. The first car had wedged itself into the roof of the tunnel. The second car had lodged beneath the first, while the third had traveled over the second and collided with the first into a mangled mess. 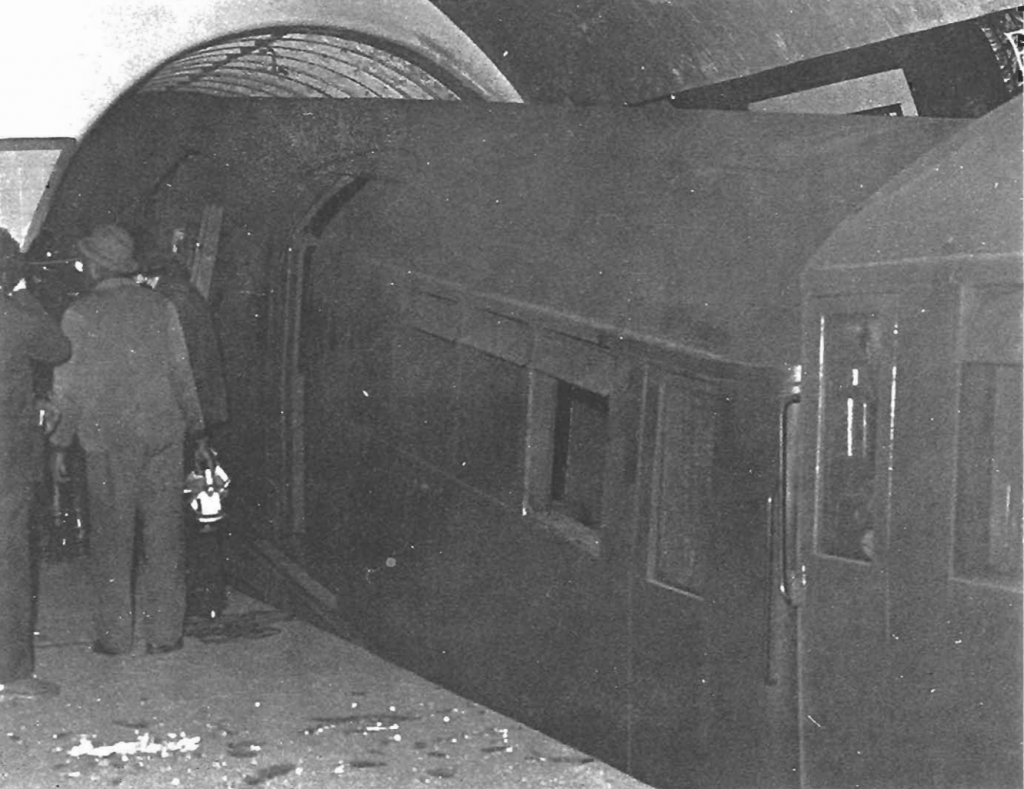 The rescue operation took almost a week to complete and consisted of over 1600 emergency personnel. Joining the firemen, police, and ambulance crews were 16 doctors and scores of volunteers and helpers. It took 13 hours after the crash to remove the last of the 74 injured passengers from the scene. The last of the 43 fatalities removed from the scene was the train’s driver, a 56-year old father of two, Leslie Newson.

Whenever a disaster of this magnitude occurs, the most obvious and pressing question is why? Why did whatever happen, happen? The engineers and investigators analyzed the remaining train and eliminated numerous considerations one by one. When tested, all of the train’s vital components and systems were working as intended. Any faulty components were direct results of the impact and not the cause of it.

The most mysterious fact surrounding the crash came from two rail workers who were on the platform when Train 272 arrived. They looked saw Newson sitting in the driver’s seat. He appeared calm and sat upright as he looked directly ahead – as if he was unaware that he was passing through a scheduled stop – when the train collided with the barrier. Investigators said that he maintained his muscle tone and balance throughout the approach.

Newson’s post-mortem examination revealed that there were no signs of cardiac problems nor of a condition such as epilepsy. The few people that knew him insisted that he was cautious when at work and followed the rulebook. He typically slowed his train down inside a tunnel and coasted into the station. The man did not drink alcohol often, and on February 27, he was shopping for cars for his daughter. However, when rescuers pulled him out of the wreckage four days after the crash, there were no indications that he had done anything to prevent injury to himself. In fact, his hand was still holding the brake. It appeared that Newson had not reacted at all.

The Aftermath of the Moorgate Train Crash

In the aftermath of the crash, a couple of curious facts about Newson came to light. The week before the Moorgate train crash, another guard had reported that Newson’s train overshot the stop at another station.

In 1978, engineers put in a new protection system which would apply brakes to an oncoming train if the driver failed to do so. Additionally, the speed limit for trains approaching platforms dropped to 10 mph from 15 mph.

Investigators understood the mechanism by which the Moorgate train crash occurred. The train failed to stop at Moorgate and was going too fast for the safety procedures at that time. What they don’t know is why it happened. Did a mysterious medical condition render Leslie Newson unable to react or could he have been secretly suicidal? To this day, family and friends of the victims still suffer from the tragedy and the mysterious circumstances of that horrifying moment, and the debate about what may have happened continues.

The Mysterious Death of Netta Fornario