In the middle of the Pacific Ocean, between the equator and the eleventh parallel, lies the ancient city of Nan Madol. It is attached to the eastern coast of the island of Pohnpei. Considered to be one of the greatest archeological wonders of the world, it is a mysterious engineering marvel, and even experts are baffled by the mystery of the island. 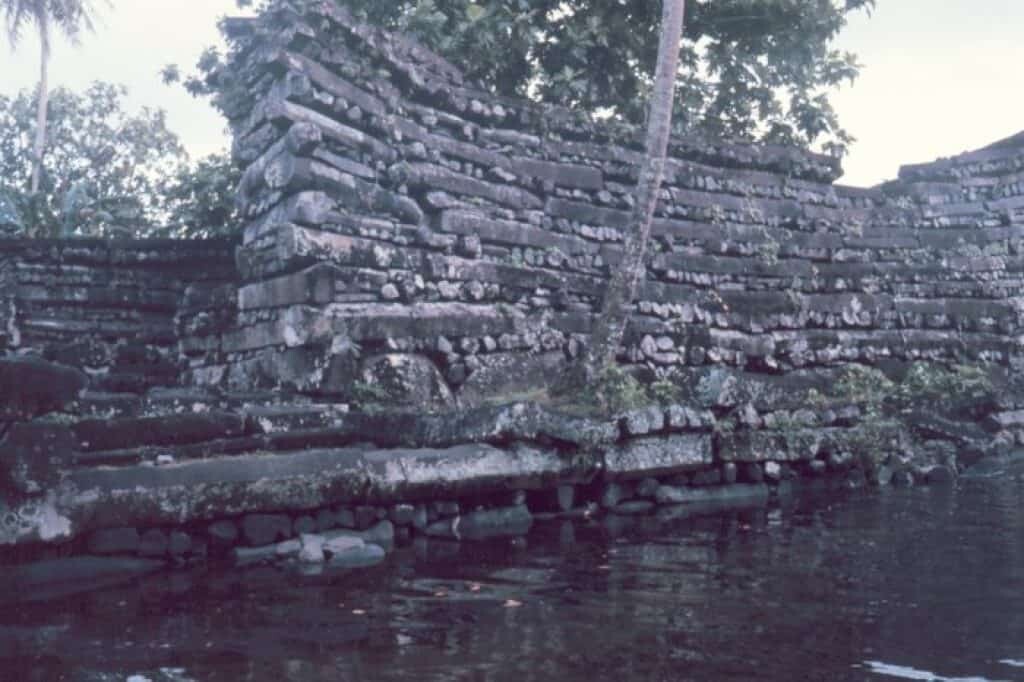 Nan Madol, part of the Federated States of Micronesia, is comprised of a vast tapestry of 92 artificially made islets all interconnected by canals. Thus, it is also known as the Venice of the Pacific. The royalty, or the Saudeleurs, lived on Madol for about 500 years from 1100 to 1600 AD. There are even tombs on the island. The mystery of the island is the megalithic structures that make up the city. The walls were constructed primarily with basalt logs, which are a type of volcanic rock. There are areas of Pohnpei that have naturally occurring deposits of columnar basalt, in which the volcanic lava cooled in the form of vertical pillars. Giant logs were moved from miles away on Pohnpei and were stacked horizontally on Madol, log cabin style, to form walls as high as 50 feet and up to 17 feet thick. This is what is so amazing.

The Mystery of How it Was Built

The average weight of each stone is 5 tons, with some weighing as much as 25 tons each. The stones and columns are so heavy that conventional and mainstream scholars have yet to determine how it was built or who built them. No technology has been identified on the island that explains how the logs were hoisted up. Some experts say the massive effort required to build the megalithic structures rivals that of the Pyramids and probably required the entire island of 25,000 inhabitants to participate if they themselves built it.

By CT Snow from Hsinchu, Taiwan (Madol ruins in Pohnpei) [CC BY 2.0

Legends of the City

Nan Madol, which means “between spaces,” lives up to its nickname as it does seem to be lodged in between truth and myth. What mainstream scholars cannot explain, locals myths can. Legend has it that the ruins of this ancient city, once home to a mysterious civilization, are abound with uncharted corridors. Those channels connect the man-made islets and possess tombs containing the remains of giants and spirits of dead kings. The locals believe that the builders used magic to transport the stones to the island.

In the TV series, Ancient Aliens, they discuss the legends and theories regarding Nan Madol. The local legend says that Madol was there before they ever arrived. The islanders do not know who built it, but they do say that the stones somehow levitated from Pohnpei and “moved as if by ghosts hands.”  Thus, the locals call Madol, The City of Ghosts.

Scientific theory suggests the stones were brought from the mainland using bamboo rafts to float them across the water. However, in 1995 while making a documentary movie for the Discovery Channel, all attempts to transport stones weighing more than a ton in this fashion failed.

No written records on the island’s history exist and it has been kept alive by oral tradition only. The local practice of keeping secrets is a sacred one. This was one of the obstacles to learning more about their history. The local king Nahmwarki made a proclamation saying to all, “To disrupt the holy ground that once belonged to past rulers with supernatural powers would be breaking the law.“ In fact, he threatened the English archeologist F.W. Christian with capital punishment should he break the law and dig. Jewelry and other artifacts that were buried with the chiefs were plundered.

There are few artifacts that remain for archeologists to study. Even if they did find any, they would face the possibility of a curse said to be cast upon those who violate the lands. In 1874, a shipwreck near the Marshall Islands took hundreds of crates belonging to Polish anthropologist Jan Kubary, to the bottom of the ocean. With it went much of the island’s history.

In the early twentieth century, Germans governed the island when Governor Victor Berg dared to disregard the royal ban. He entered the sealed tomb on the island and opened the coffin of the ancient island rulers. In it he found the skeletal remains of giants measuring two to three meters tall. That night, the island was alive with spirit activity. A wild storm came about with lightning flashes in the sky. Torrential rains pounded down on the island as Governor Victor Berg lay in delirium, hearing the sounds of a conch shell blowing.

The next morning, on April 30, 1907, Governor Berg died. The German physician serving on the island that night could not determine the cause of death, but the natives were certain that his death was a curse from the Gods for his blatant disrespect. Today’s rationale says he died as a result of sunstroke and heat exhaustion contracted while surveying the ruins.

Why would someone build a city on coral reefs that rise only five feet above water? There was no food or water available on the island. The rulers depended on the “commoners” to bring them whatever they needed. What was the purpose of Nan Madol? This question has puzzled scientists for centuries.

Theory for the Existence of the Mysterious Structures

There is a very interesting theory that may answer the many questions about the mysterious city of Nan Madol and the purpose of its existence. Madol sits halfway between the Hawaiian Islands and the Philippines. Severe storms and typhoons begin at this location. This happens when cold air comes into contact with the warm waters of Caroline Islands. Research shows that many severe storms originate from Madol location. Perhaps this is not coincidental. Because this area generates severe storms, storms rarely hit it directly. This makes it the safest place in the Pacific.

Nan Madol and Kosrae (an islet similar to Madol) create a 300-mile long zone. This zone is the birthplace for typhoons and the place where they develop their strength and severity. They soon grow too big and end up ravishing the Philippines.

Joseph Newman, the inventor of The Energy Machine, declared late in the last century that, “ the major effect in respect to hurricanes is electromagnetic. For a hurricane to sustain itself, it does not solely depend on the heat of the water on which it travels.” Newman concluded that temperature was of secondary importance in the production of a hurricane, adding that electromagnetism was the most important factor.

Legends, myths, magic, truth, and theories. They all surround Madol and provide us with many avenues to choose from. It all depends on how we want the story to come out. There is an old saying that goes, “There is a little bit of truth in everything we say.” All legends and myths entwine with a little bit of truth.

Research continues today at Nan Madol and the tapestry of man-made islets in Micronesia. We will learn more about this strange place in the middle of the Pacific Ocean in the years to come.

The Plain of Jars: Ancient Mortuary Vessels and...