Home » Archaeology » History of the Megalithic Taulas of Menorca
Archaeology

The Spanish Island of Menorca lies in the western Mediterranean and is the easternmost island of the Balearic group. It is a relatively small, rocky island measuring 50 km across at its widest.  Although this island is just a speck in the vast sea, it has attracted the attention of many archaeologists due to 35 mysterious stone megaliths scattered throughout the island. One glance at these megaliths, named locally as taulas, and they become instantly familiar. The taulas of Menorca look remarkably similar to the famous megalith of England called Stonehenge and the oldest temple in the world, Gobekli Tepe of Turkey. 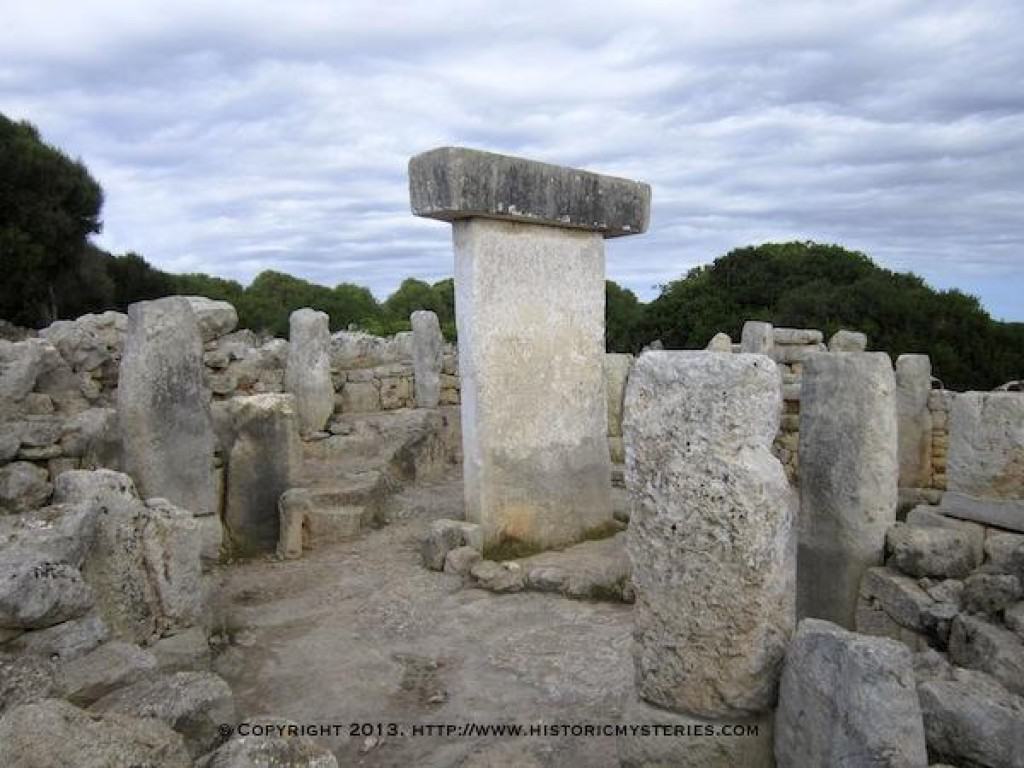 Humans have been known to exist on Menorca since at least 2000 BC, perhaps even earlier. Some experts suggest the first seafaring people to arrive were of the eastern Mediterranean, such as the Minoans in Crete. The period during which their culture would flourish and evolve would become known as the Talayotic period of Menorca. The Talayots would thrive there for thousands of years until the arrival of the Romans in 123 BC.

Menorca is located in the western Mediterranean between Sardinia and Spain.

What We Know and Don’t Know

The Talayotic people who created these megaliths never documented the exact purpose of the mysterious stone monuments they left behind. Now, thousands of years later, researchers and archaeologists are trying to identify why they were built.

What we do know is that the megaliths of Menorca are known locally as “taulas,” which mean tables in the Catalan language spoken on the island. The name originated when the only remaining feature of these buried megaliths were the flat, table-like tops, protruding from the surface of the earth. Because many of these taulas were buried long ago, some have been unearthed and found to be in almost pristine condition.

The taula of Torralba d’en Salort*, is one of the thirteen most preserved taulas of Menorca and is the most intact taula on the island. Just like most of the other taulas, it was also buried under dirt and rock before being found again. If one looks closely at the stone support structure of the Torralba d’en Salort taula, the maroon color of the soil still stains the stone post. The stain, so high on the post, reveals just how deep this megalith was buried.

The Menorcan taulas all share the same basic features. They are set in a horseshoe enclosure with a wall of surrounding stones. Its entrance lays opposite the front face of the stone monument. Another common feature of the taulas is that they generally face a southerly direction with an unobstructed view of the horizon. Additionally, these taulas are unique to the Island of Menorca and located nowhere else in the Balearic Islands.

There are no records identifying the religious practices of those who built these taulas.  In fact, if they did worship a god, we do not know its name.

One theory states that the taula was a representation of their god, much like a cross would be to Christians.

Temple of the Bull Dog

The Torralba d’en Salort is almost completely surrounded by a wall, with the exception of an opening in the front.  Rectangular shelves were purposefully included in these walls, which may have been used to display their religious figures.  During the excavation of the Torralba d’en Salort, a bronze bull was found which may have been an object of worship originally housed on one of these shelves.

Another discovery was a clay perfume burner in the shape of a goddess’s head. These artifacts bear a strong similarity to the decorations one would find in churches today.  The discovery of the bronze bull is significant since the original people of Menorca are believed to have come from Crete. The bull played a prominent role with the Minoans of Crete during the Bronze Age. In 1967, Spanish archaeologist J. Mascaro Pasarius boldly suggested that the taula was a representation of a “Bull God,”  the vertical slab representing the face of the bull and the horizontal slab its horns.

There is some disagreement with this theory.  Up to a few years ago, it was believed the taulas had a roof, but now researchers agree that they did not.  Remnants of a sacrificial fire pit were found in a semi-circle enclosure towards the front of the taula.  It is believed this fire pit was used to sacrifice animals to their god.  The pit was fairly large, so a roof over this taula would be impractical.

Remnants of another fire pit used as a stove were also found just right of the entrance to the taula.  This kitchen, so to speak, was probably used to prepare food for the tribe following their celebrations. Stone seats next to this outdoor stove were most likely reserved for important tribal leaders, families or the elderly. 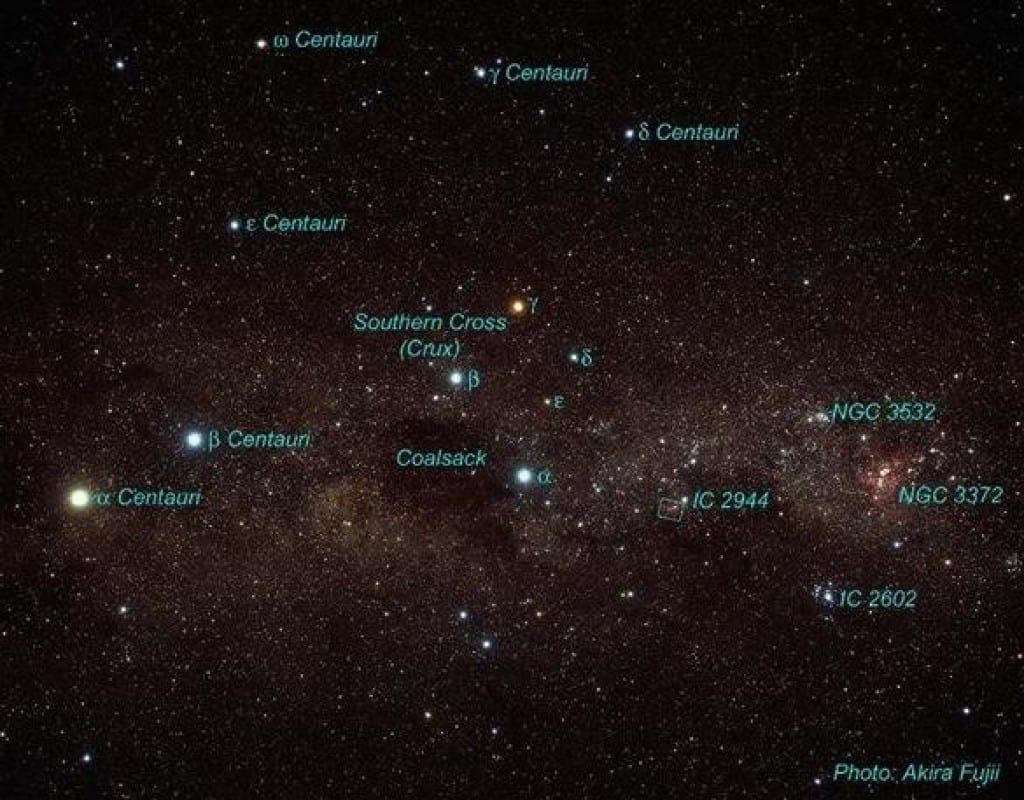 Were the taulas oriented to the Centaurus constellation? Image credit: Akira Fujii

Another theory suggests the taulas were oriented to the Centaurus constellation, which includes the Southern Cross and the bright stars Beta and Alpha Centauri.  Although these clusters of stars are no longer visible in the night sky of Menorca, they were clearly visible over the southern horizon 3,000 years ago.  This may also explain why no taulas are found on the neighboring island of Mallorca, which is mountainous with no clear view of the horizon for the majority of islanders who lived inland.

The connection to the Centaurus constellation originates from another discovery found while excavating the taulas.  In one excavation, an Egyptian figurine was found containing a hieroglyphics inscription that read, “I am Imhotep the god of medicine.”  Also found was a bronze horse hoof. Using this evidence with our understanding of Greek mythology, we know the Greek god of medicine, Asclepius, was tutored by the centaur named Chiron.

As time passed, the Centaurus constellation became harder to see in the southern sky.  By 1,000 BC, this star cluster was barely visible at all.  This may explain why the taulas were eventually abandoned.  Once Centaurus was out of sight, the Talayots no longer found the taulas to be relevant.  Ceremonies became fewer and far between and eventually, the practice ceased altogether. The Talayots, no longer seeing a use for these taulas, buried them in the rocky soil.

In 1930 the German archaeologist, researcher, and artist, Waldemar Fenn, came to Menorca and studied its history. He was fascinated by its ancient culture and remained in Menorca for the rest of his life.  Fenn eventually wrote two books about Menorca and the taulas.  His theory is considered by some researchers as arguably the most realistic because it appears to best explain the twelve of the thirteen intact taulas on the island.  The only taula that did not match his theory was the megalith located in the northern part of the island.

In Fenn’s studies, he noted a prehistoric cave drawing found on Menorca which showed accurate interpretations of constellations.  This convinced him that he was dealing with a culture that had developed a strong interest in astronomy.

Fenn also realized that the taulas all generally faced in a southern direction. The first thing Waldemar Fenn wanted to prove was that this place was a religious monument.  This should have been easy to do since many cultures throughout history would normally create their religious structures pointing to a fixed point in the sky.  However, Fenn realized this may not be the case when it was revealed that the taulas did not point to any known fixed point in the heavens.

Fenn revised his hypothesis. If the taulas are not pointed to any particular fixed point in the sky, then perhaps it was created for an object in the sky that moves. This hypothesis showed positive results.

Fenn also noted the number of columns surrounding the taula. There were twelve full columns, plus one half-sized column.  Fenn realized the half-column was not shortened because of structural damage. It was designed like that on purpose.  Returning to his moon theory, Fenn knew every year there are either twelve or thirteen full moons. The average, of course, would be 12.5. This number explains why there are 12.5 columns surrounding the taula.

But one problem still remained. Fenn knew that twelve of the thirteen taula sites accurately portrayed this moon movement. The only exception was the taula in the north of the island. This was the only taula not facing the same location as the other twelve.  This perplexed him and prevented his theory from receiving wider acceptance.

It wasn’t until many years later that researchers learned the entrance to that lone taula is not in its original location. Fenn may have been right all along. Fenn believed these taulas were prehistoric calendars. The ancient people of Minorca who created these taulas over 3,500 years ago followed the moon and accurately predicted lunar eclipses.

But as we all know, a theory is just a theory. Perhaps one day we will learn the true purpose of the taulas of Menorca. Until then, they will remain a true mystery of this enchanted island.

Is Nefertiti buried in the Tomb of King...