The death of Adolf Hitler is one of the most discussed mysteries in history. The Fuhrer was both a beloved and a hated figure and he continues to be so to this day. Therefore, it is hardly surprising that people are curious about the manner of his death and when it occurred. The general consensus is that he killed himself with a cyanide tablet and a bullet to the head on April 30, 1945. However, the Soviets were not so sure of this, so they launched “Operation Myth.”

What is Operation Myth

Operation Myth was an investigation into the death of Adolf Hitler and the authenticity of the bodies that were discovered when the Red Army invaded Berlin. 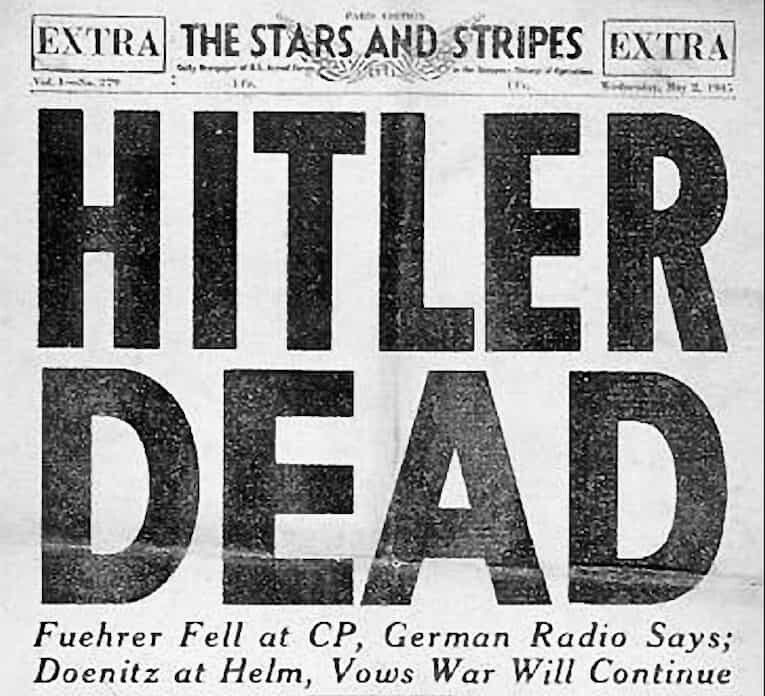 On April 30, 1945, the Soviet Red Army was attacking Berlin. Meanwhile, Hitler and a few trusted associates were hiding underground in the Chancellery Bunker. The bunker was designed specifically to protect the Fuhrer. It was replete with personal apartments for Adolf and his new wife (of which the public had no knowledge), Eva Braun. Hitler and Eva were there when they supposedly committed suicide, an event that Operation Myth would cover extensively.

Shortly after Hitler and Eva’s supposed suicide, Hitler’s men reportedly took their bodies outside and attempted to cremate them, with partial success. They then buried the bodies in the Chancellery garden. When the Red Army arrived, they found a body that looked like Hitler. The Soviets later discovered that it actually belonged to Hitler’s doppelgänger, Gustav Weller. They found the two partially cremated bodies as well. At first, they were dismissed because the soldiers believed the Fuhrer’s body had been found. They became more interested in the two bodies when the first turned out to be a trick. Many people believe they belonged to Eva and Adolf, though no forensic evidence remains.

The Soviets claimed they had found Hitler’s body in the weeks after the invasion of Berlin. However, they admitted that they did not have the body a few weeks later. In order to ascertain whether Hitler escaped and where his body was, Operation Myth was launched.

The Operation Myth file (1-G-23) was a secret until just recently. Since it has been made public (to an extent), we know that the operation’s focus was to interview (interrogate) people who were close to Hitler and/or who were with him in the spring of 1945. Roughly 800 people were questioned.

Hitler’s successor had made a public announcement that the Fuhrer had died while fighting in Berlin. This account of events was only accepted by Hitler’s followers (some neo-Nazis believe this too). It did not hold water with Operation Myth investigators. Through their questioning, they had ascertained that Hitler and Eva both alluded to their impending suicide that April. They had also received statements from most of the men close to Hitler at the time say he shot himself in his right temple and was disposed of by his men. They eventually came to the conclusion that they had Hitler’s body. Alternatively, that is what they wanted everyone to believe.

The body that was dug up from the Chancellery garden is the most likely candidate for Hitler’s corpse. Unfortunately, it had reportedly been dug up and reburied several times before being destroyed under orders from KGB leader Yuri Andropov in 1970. The Soviets kept some evidence of the body and the suicide. They kept a piece of the bloodstained couch that Hitler was supposedly sitting on when he shot himself, a lower jaw showing some dental work and a piece of skull. Forensic analysis of the couch gives us nothing because Hitler’s relatives do not respond to test requests. The skull, on the other hand, was revealed to be that of a woman by an expert working for the History Channel.

Why Hitler Most Likely Committed Suicide

This is believable for many reasons. Firstly, it would have been odd for Hitler to fight on the front lines in Berlin, knowing what the Red Army would do to him if he were caught. Secondly, other Nazis like Joseph Goebbels and his wife, Magda had committed suicide. Joseph and Magda went as far as to kill their six children first. This tells us that it was seen as preferable to being captured. Lastly, there was very little chance for Hitler to escape. He waited until the Red Army was on his doorstep.

Because Hitler was fully aware of how the Italian partisans treated Benito Mussolini‘s body. Hitler left explicit instructions that his body be burned.

An analysis reported in the European Journal of Internal Medicine provides the best confirmation that Hitler did indeed die on April 30, 1945. Hitler had very bad teeth and French Lead pathologist Philippe Charlier examined the lower jaw bone in an attempt to match the teeth to Hitler.