Home » Archaeology » What is a Roman Dodecahedron?
Archaeology

Archaeologists are rarely stumped when it comes to figuring out the purpose of the Roman artifacts they unearth. However, the Roman dodecahedron has everyone baffled. Over 100 of these hollow, knobby, metallic polyhedrons with 12 sides have surfaced at excavation sites mostly around central Europe. At present, there is no definitive answer to their function or purpose. 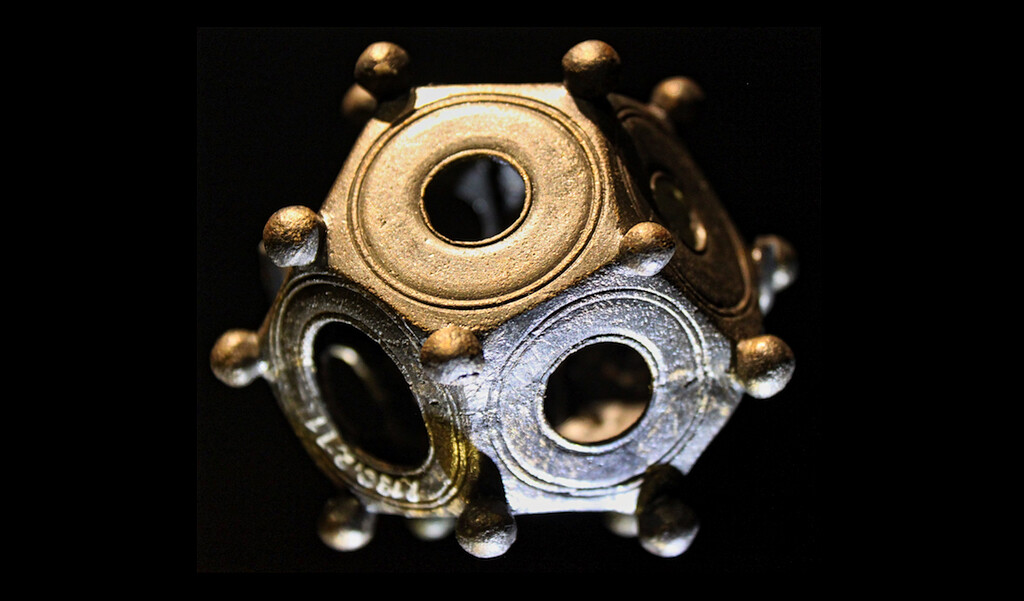 This Roman dodecahedron derives from the 2nd or 3rd century in Stuttgart, Germany. CC3.0 Anagoria.

The enigmatic geometric forms consist of copper alloy. They range in size from 4 cm to 11 cm, and each of the 12 pentagonal faces contains a circular hole. Oddly, the diameters of the holes are not identical in a single dodecahedron. They also vary from one dodecahedron to another. All of the Roman dodecahedra have five globular knobs at the vertices of the pentagonal faces. The variations in dimensions and designs of the dodecahedra, in addition to their holes, are perplexing.

Some dodecahedra surfaced in the antiquities market and, therefore, lack archaeological context. Others emerged in controlled, scientific excavations. Archaeologists unearthed the southernmost Roman dodecahedron at Arles in France. The northwesternmost example comes from a site on Hadrian’s Wall in Northern Britain. Yet another piece comes from Bordeaux. Additionally, they have also surfaced as far east as Vienna and Zagreb.

Did the Roman legion of Marcus Crassus get lost in China?

There is a distinct lack of consistency in the archaeological context of the cast dodecahedra. Roman military camps, public baths, and temples have contained samples. Dodecahedra surfaced in a Roman theatre, a tomb, and a well that contained numerous discarded items. Several also turned up in coin hoards, suggesting that they were valued objects. Even an analysis of the layers of dirt around excavation sites from the second to the fourth century CE provides no clues. As a result, these variations in the discoveries have confounded those attempting to clarify their function. Additionally, a complete absence of any mention of them in Roman texts adds to their mystery. 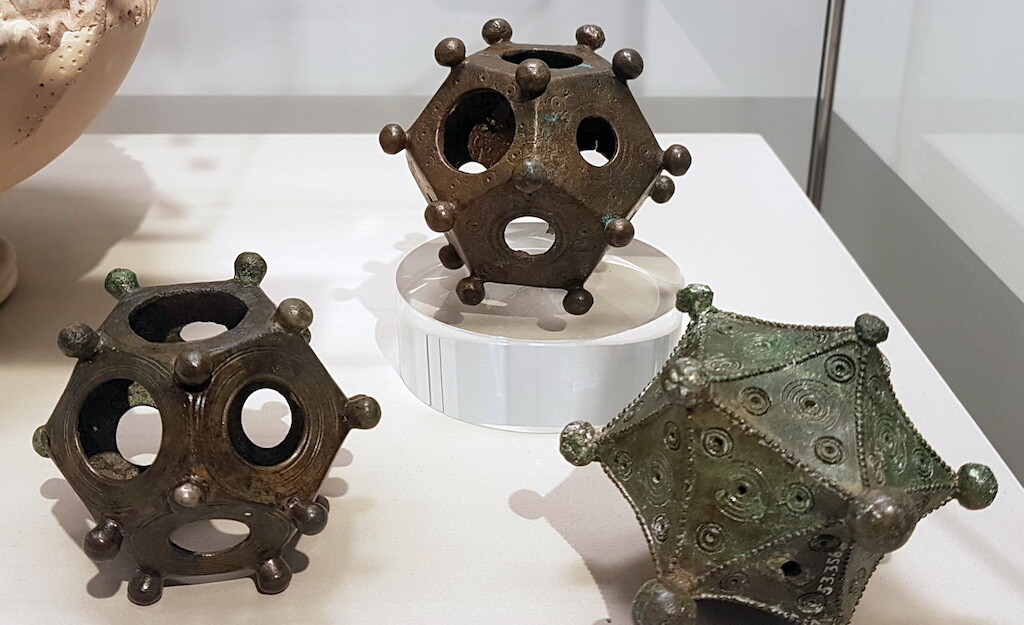 What Was the Function of a Dodecahedron?

From the first report of a dodecahedron in 1739 until today, over two hundred archaeologists, historians, mathematicians, and hobbyists have put forth theories on the purpose of these bizarre objects.

Dodecahedra, for the most part, originate in Gallo-Roman lands where Roman culture overlayed an indigenous ancient Celtic civilization. Therefore, several theories involve mysticism. Some propose that the dodecahedra had a religious function with the twelve holes symbolizing cosmic phenomena. Others suggest that they had a talismanic role. However, since they are too large to suspend form the neck, perhaps they dangled from a belt. Alternatively, they could have fit nicely into a leather purse.

A more likely supposition is that they served some function in astronomical calculations. Perhaps they sat on a flat surface or leaned on a stick. According to this hypothesis, a dodecahedron could align with the sun, which would shine through two holes at a specific time of day in a particular season. The proponents of this theory used complicated mathematical calculations to show that a dodecahedron could predict astronomical events. In his article, The Hypothesis, G.M.C. Wagemans used a series of estimates showing that several dodecahedra could calculate the best time for planting winter grain in specific locations in Northern Europe.

Some skeptics refute the mathematical/astronomical theories. They conclude that the differences in hole sizes and the overall size of Roman dodecahedra prove that they cannot have been used to calculate astronomical phenomena. The same goes for the theory that the metal dodecahedron served as a modern-day theodolite for measuring distances required in land surveying. 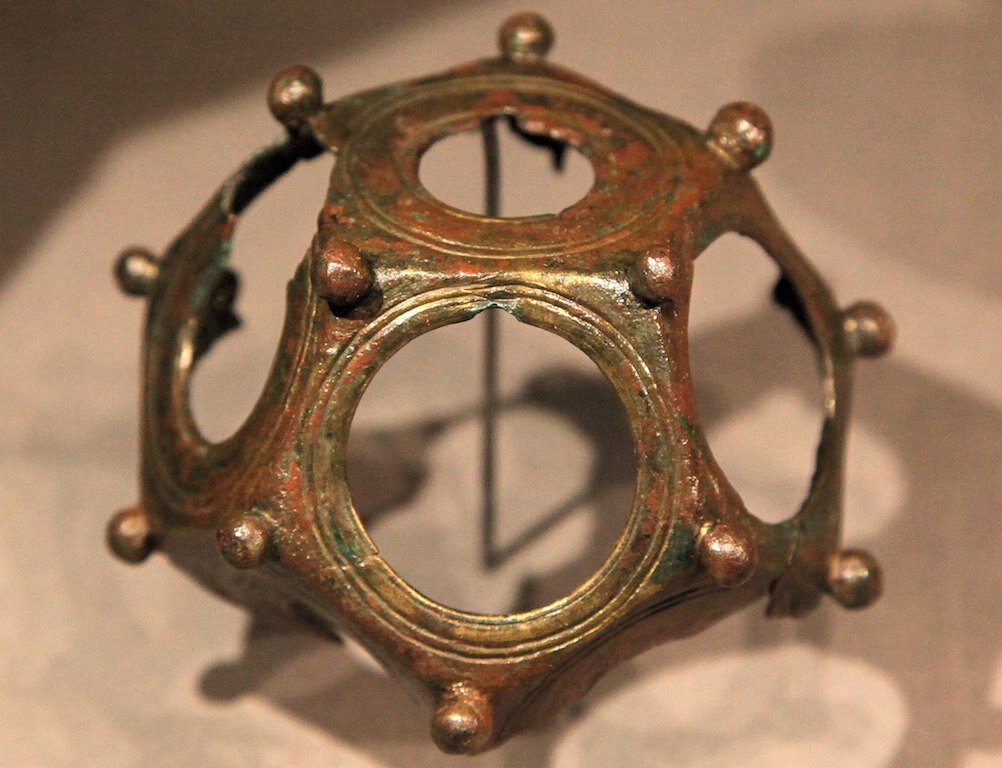 Other theorists have advanced more straightforward ideas concerning the function of the Roman dodecahedron. Some have said it was useful for soothsaying or divination where seers tossed the metal object and read it like a die. However, the fact that the sides bear no written inscriptions or symbols militates against this purpose. Rolling or tossing a Roman dodecahedron would have been almost impossible because of the protruding knobs. Therefore, it is unlikely to have been a divination tool or an object used in a game.

Because traces of wax exist in some dodecahedra, researchers have proposed that they were candleholders. However, many experts have dismissed this notion for two reasons. First, the wax residue is probably a remnant of the lost wax process used in casting. Second, if these items were candlestick holders, why haven’t archaeologists found a single example in Italy or regions of the Roman Empire around the Mediterranean? The distinct geographical area of dodecahedra discoveries makes the mysterious items unique within the vast world of Roman archaeology. In contrast, other types and models of bronze castings are ubiquitous throughout the Empire.

Among the theories that hobbyists have proposed, the most ingenious involves the use of a dodecahedron to crochet or knit a wool glove. A talented student recently made a Roman dodecahedron 3-D print of one and worked a glove on it. Subsequently, the student recorded the process in a YouTube video.

The idea of making a winter hand-covering on a Roman dodecahedron fits nicely with the wintry geographical discovery sites. Additionally, maybe the different sizes of the holes on the faces correspond to various fingers on a glove.

Perhaps the Roman dodecahedron served as nothing other than decoration. One could imagine that the odd piece suspended from a rope on a belt may have added a bit of swagger to a costume. Similar polyhedral decorative beads with globular protrusions surfaced in sites dating to the 3rd and 4th centuries BCE in Southeast Asia. However, the idea that Roman dodecahedra were merely decorative does not take into account the inconsistent sizes of the circular holes.

Will anyone ever solve the puzzle of the function of the Roman dodecahedron? Judging from the many theories over the last two hundred years, the solution to the enigma may prove to be elusive.