On the morning of January 15, 1947, officers Frank Perkins and Will Fritzgerald responded within minutes after they received a call from a woman who had made a gruesome discovery in a vacant lot in Los Angeles. The officers found the body of a woman who had been severed in half. They noticed that there was no blood on the body or in the area where she had been left, clearly indicating she had been murdered elsewhere and washed clean. Although the woman’s name was Elizabeth Short, the media called her the Black Dahlia, and her heinous murder would go down in history as one of the most disturbing and well-known cases of all time. 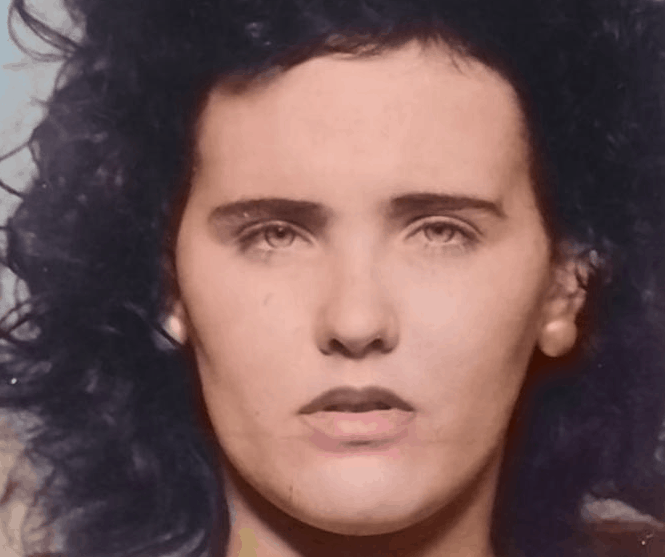 Details of the Black Dahlia Murder

A neighborhood woman and her three-year-old daughter were walking to the shoe store in the Leimert Park neighborhood when they found the body of Elizabeth Short. Initially, the woman thought it was just a broken mannequin. After she looked again, she screamed when she saw that it was a real person dead in the grass. The murderer had posed the body in a suggestive way.

Elizabeth was on her back with her arms raised over her shoulders and her legs spread apart. It appeared that someone had drained the blood from the body and washed it off somewhere else. There were only a few spots of blood: one on a tire track, one on the curb next to the body, and one on an old cement bag nearby. Someone had removed portions of her flesh. Cuts and abrasions covered her entire body. Her mouth had been slashed toward her ears, three inches on one side and two and a half inches on the other – what they call “the Glasgow smile.”

Ligature marks were visible around her wrists, ankles, and neck. A four-inch incision ran from her navel to the top of her pubic bone. However, the worst part was that her entire torso had been cleanly sliced in two, just above her waist. Her lower torso lay about ten inches away from her upper torso. There was little bruising around the cut, which indicated that the dissection occurred after death.

Due to the horrible nature of the case, the Los Angeles Police Department made it a top priority. They assigned two of its senior detectives to the case, Detective Sergeant Harry Hansen and his partner Finis Brown.

By the time the detectives arrived at the scene, it was swarming with onlookers and reporters. Knowing that evidence was being destroyed, they cleared the area while the body was taken to the Los Angeles County Morgue. They also lifted her fingerprints and sent them to the FBI for identification. They received word a few short hours later that the victim of this crime had been identified as 22-year-old Elizabeth Short.

Examination of the Body

The coroner’s office started an examination of the woman’s body. Although the cause of death was listed as “hemorrhage and shock due to concussion of the brain and lacerations of the face,” an incredible and horrifying variety of wounds to the young woman’s body were discovered. It also appeared the victim had been raped, however, they found no sperm. Most of the injuries occurred before death.

On Tuesday, January 21, 1947, the Daily Police Bulletin featured a page on the Black Dahlia murder. 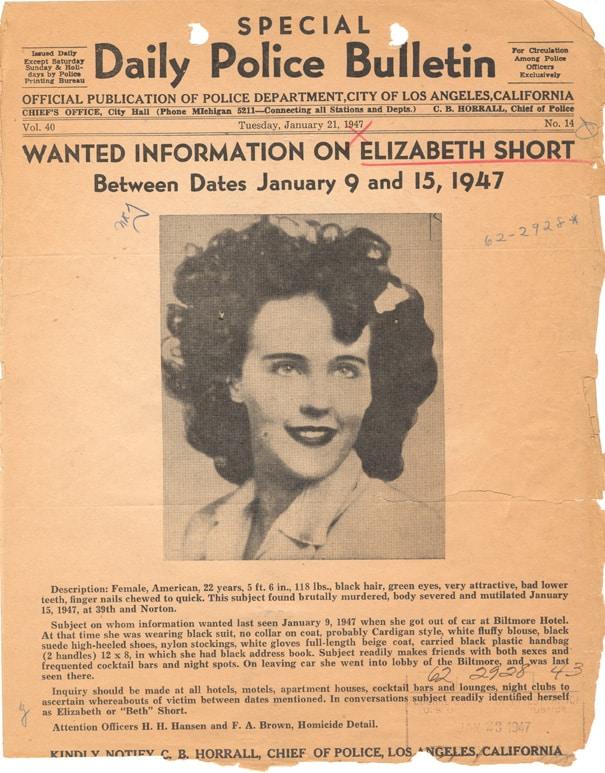 Who Was Elizabeth Short?

Elizabeth Short was born in Boston, Massachusetts, on July 29, 1924. She was incredibly beautiful in a mysterious, sensual sort of way. She had raven black hair, white alabaster skin, and startling light blue eyes. Porcelain doll features left an impression on the soul of any man who knew her. Some people say that she wore a lot of black clothing. This possibly contributed to her nickname, “The Black Dahlia.” Initially, newspapers called the case the “Werewolf Murder.” However, after The Los Angeles Times reported that customers who frequented a particular drugstore nicknamed her, “The Black Dahlia” for her black hair and clothing, the latter name became much more popular.

Cape Cod’s Lady of the Dunes Case is Still Ongoing

Elizabeth grew up in Massachusetts during the Great Depression. Her father vanished in 1930 after he had lost most of his savings in the crash of the Stock Market. When they discovered his vehicle next to the Charlestown Bridge, they assumed he jumped into the river and committed suicide. However, in reality, he had abandoned her mother and five children. In 1942, he resurfaced after he had built a new life for himself in California. After he apologized to Elizabeth’s mother, at the age of 18, Elizabeth moved from Massachusetts to California to live with him.

[wpsm_quote author=”Dorothy Hernon, Medford neighbor” float=”none” width=”100″]Bette was good, sweet, funny, not stuck up, always stopped and chatted, made you feel at ease. And what a walk. The truck drivers and men would stare when she walked down the street. It was a wonder there weren’t more truck accidents when she walked down Salem Street… She just looked so graceful, but eye-catching, something to look at.[/wpsm_quote]

In 1943, Elizabeth moved out of her father’s house, perhaps because the pair couldn’t get along. She stayed in California, though, and worked a job at an Airforce base exchange while she lived with various friends and, at one point, with a reputedly abusive Army Airforce sergeant.

Since childhood Elizabeth loved cinema, and saw herself becoming an aspiring actress. She moved to Santa Barbara where she was arrested for underage drinking. At that time, the police took her fingerprints and, subsequently, sent her back to her hometown of Medford, Massachusetts.

However, Elizabeth had no desire to go back home. Instead, she got off the train in Florida. She met and quickly formed an attachment to Army Air Force Major Matt Gordon, Jr., and in 1944 she fell in love. She accepted his marriage proposal while he was in India, but her dreams of a life with the Major ended abruptly. 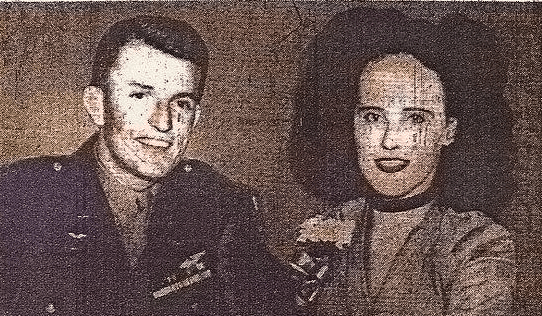 Elizabeth answered a knock on her door. On the porch was a postal messenger with a telegram addressed to her. The message inside was from the mother of the Major. It bluntly stated, “Have received notification from the War Department. My son, Matt, killed in air crash.”

She packed her things and left home once again. This time, she went back to California where she worked as a waitress, rented a room, and dated a few men before her murder.

Elizabeth Short was last seen in the lobby of the Biltmore Hotel where she was supposed to meet her sister. Some witnesses attest that they saw her on the phone in the lobby of the hotel. Others supposedly saw her at a local bar down the road. Nonetheless, she officially vanished on January 9, 1947. This is where the trail also ends for authorities. Somewhere, she met the person who would slay her and leave her mutilated body in Leimert Park neighborhood. However, her trail left little evidence. The police search of her clothes in drains and sewers for miles around the murder scene turned up nothing. Subsequently, days later someone reported a purse and shoe laying atop a garbage can. These, indeed, belonged to the victim.

The murder was horrifying. When the news reporters saw how beautiful The Black Dahlia was in her government application photo, they knew they had a sensational story. Wanting to juice up the piece, they resorted to the most unethical thing a person could ever do. They phoned Elizabeth’s mother, Phoebe Short, and told her that her daughter had won a beauty contest. After getting as much personal information about Elizabeth from her mother, they informed her that her daughter was actually dead.

Nine days after Short’s death, someone mailed a package to the Examiner – possibly the killer. It contained Elizabeth Short’s birth certificate, social security card, address book, and Matt Gordon‘s obituary. The package reeked of gasoline, which the sender used to erase any fingerprints from the envelope. The Los Angeles Police Department tracked down and interviewed all the men listed in her address book. But this did not bring them any viable leads.

The Memory Of Elizabeth

The murder of Elizabeth Short is a sad, disturbing moment in history. Although some misinformation exists, as with all cases, online media has kept her memory alive. The 22-year-old was a beautiful young woman trying to make a life for herself. Unfortunately, she never had the chance to grow into the woman she was meant to become. The Black Dahlia is now a cold case. It is still unsolved and stands as one of the most famous murder investigations in American history.