Hanging Gardens of Babylon May Have Been in Ninevah

The Hanging Gardens of Babylon rose toward the heavens like a mountain. Its exotic trees grew lush and tall on its highest tier. Greek historians of the Hellenic Age named this stunning paradise one of the Seven Wonders of the Ancient World. Scholars are sure that six of those wonders existed. However, the famous gardens eluded historians for millennia. Where were they? Did they exist at all? One researcher thinks she may have solved the mystery.

The Hanging Gardens of Babylon were one of the Seven Wonders of the Ancient World. Source: Odyssey.

Legendary Origin of the Hanging Gardens of Babylon

One of the popular legends about the gardens says that King Nebuchadnezzar II (r. 605-562 BC) of Babylon built them for his homesick wife, Amytis of Media. Amytis missed the green mountains of Persia. The legend places the garden about 50 miles south of Baghdad in present-day Al Hillah, Babil, Iraq. Unfortunately, there are no records, inscriptions, or archaeological evidence in Babylon to support this story.

Mesopotamia’s Fertile Crescent, where Babylon existed, was a highly tumultuous area in history. Civilizations rose only to collapse under the often ruthless conquest of a more powerful ruler. The wars destroyed palaces, temples, records, and city structures. As such, all traces of the Hanging Gardens may have disappeared, leaving us no archaeological evidence.

The Quest for the Ark of the Covenant

It is also possible that historians may have gotten their facts wrong or fabricated specific details. Writers often mixed myths and legends in with history or distorted the facts to support their agendas. Additionally, although ancient writers did mention impressive gardens, only a few fragments remain due to the widespread destruction of texts.

Therefore, it isn’t easy to trace the descriptions back to the oldest and, presumably, most reliable sources. Of the extant fragments, from whom each version derived becomes clouded in multiple copies of copies throughout the years. Still, some realistic facts may have survived in the subsequent works of authors.

Details of the Hanging Gardens of Babylon

Tracking down the first credible description of the Hanging Garden of Babylon is difficult. Perhaps the oldest comes from Ctesias of Cnidus, who lived in the fifth century BCE. Only fragments of his work survived but none regarding the Gardens of Babylon. According to plinia.net, Diodorus Siculus appears to have used Ctesias’ version closely. Therefore, through Diodorus, we still have his description of the Hanging Gardens of Babylon.

Scholars believe that Ctesias attributed the garden to the Assyrian regent queen Semiramis (a.k.a. Sammu Ramat). She was famous for her leadership and many improvements to Babylon in the ninth century BCE. Diodorus counters this by saying that it was not Semiramis who built the gardens, but a Syrian King who came later.

Diodorus’ details about the garden exist in his Bibliotheca Historica, Book 2 Chapter 10, on perseus.tufts.edu (in Greek). A full translation by Irving Finkel can be found on plinia.net. The following is a paraphrased description:

The garden was square with sides that were 400 feet long. Like a theater, it had tiers that rose up in height to the top terrace, which was 75 feet high – the same height as the city walls. Each tier was supported by a vaulted gallery underneath it with 14 foot-long by four-foot-wide stone beams.

Reeds in thick bitumen overlay the beams, with two additional layers of baked bricks cemented together and a layer of lead to waterproof the ceiling. Above the foundation, a deep layer of dirt grew many types of trees that were either strikingly large or beautiful. The abundant water came from the river and flowed through a sophisticated mechanical system that ran up a hidden conduit in one of the galleries.

What Other Historians Had to Say

Subsequent writers, such as Strabo, based their descriptions of the gardens in Babylon on Clitarchus. Philo of Byzantium provides a similar account to the one above. However, he says the irrigation came from a high level and flowed down into the garden. Quintus Curtius Rufus (first century BCE) also described the Hanging Gardens based on Clitarchus’ work.

Then there is Berossus, who sometimes gets credit for the oldest version. However, his copy does not exist, and there is some speculation that later authors added details about the garden to Berossus’ material. On the other hand, in the fifth century, Herodotus wrote in explicit detail about Babylon’s walls, roads, and waterways. Nonetheless, he failed to mention any gardens at all.

Regardless of all the confusing fragments, there are some inscriptions and reliefs from the Neo-Assyrian capital, Nineveh, that detail a unique garden. These inscriptions, coupled with archaeological evidence, also suggest an impressive artificial irrigation system. The Assyriologist from Oxford University, Dr. Stephanie Dalley, can read ancient cuneiform inscriptions. She has proposed a theory that overturns conventional thinking. It was the Assyrian king, Sennacherib (r. 705 BCE to 681 BCE), who created the Hanging Gardens in Nineveh, about 340 miles north of the city of Babylon.

Part of the evidence for this lies in Sennacherib’s records. Archaeologists found stone prisms with cuneiform text in the ruins of his palace. When Dalley translated the cuneiform, she discovered something intriguing. The king tells of the exotic trees and plants in his garden near his palace. He detailed his invention of a mechanical device that carried water up to the garden’s highest levels all day. Dalley believes he may have invented an Archimedes-type screw.

Where Was the Garden of Eden?

Sennacherib’s Annals, in the form of stone prisms, are still extant today. Dalley provides a translated excerpt in her book, The Mystery of the Hanging Gardens of Babylon:

I created clay moulds as if by divine intelligence for ‘cylinders’ (gišmahhu–tall tree-trunks) and ‘screws’ (alamittu–palm-trees), tree of riches …4 In order to draw water up all day long, I had ropes, bronze wire and bronze chains made.5 And instead of a shaduf I set up the ‘cylinders’ and ‘screws’ of ‘cupper’ over cisterns. I made those pavilions look just right.6 I raised the height of the surroundings of the palace, to be a Wonder for All Peoples. I gave it the name ‘Incomparable Palace’.

A high garden (kirimāhu) imitating the Amanus mountains I laid out next to it, with all kinds of aromatic plants, orchard fruit trees, trees that enrich not only mountain country but also Chaldaea (Babylonia), as well as trees that bear wool [cotton?], planted within it.

According to Dalley, scholars believe Sennacherib’s garden would have required about 300 tons of water each day. However, archaeological evidence shows us exactly how he irrigated such an enormous landscape.

Satellite images reveal a canal system approximately 60 miles long that ran from the mountains at Khinnis to Nineveh. This system diverted about half of the river and routed the water to the capital city through the Jerwan Aqueduct, which consisted of about two million stones. Portions of this aqueduct still stand. Proud of his engineering feat, King Sennacherib signed the aqueduct with his inscription. (PBS).

Sennacherib king of the world king of Assyria. Over a great distance, I had a watercourse directed to the environs of Nineveh, joining together the waters… Over steep-sided valleys I spanned an aqueduct of white limestone blocks, I made those waters flow over it. 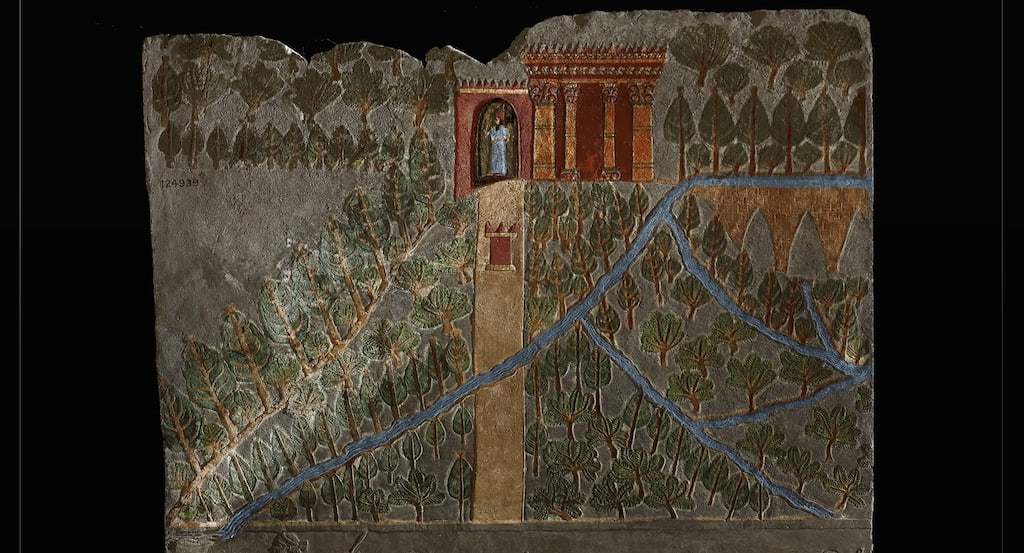 Bas-relief (in color) from Sennacherib’s grandson’s palace showing Sennacherib’s aqueduct, irrigation, stele of a king, and pavilion. The British Museum.

Sennacherib also recorded his achievements in pictorial bas-reliefs that decorated his palace. In fact, the records of the British Museum contain an exact drawing of one of his reliefs, which is now lost. It shows a tall garden in levels and an arched aqueduct that provides the water to the garden. Additionally, in the upper right-hand corner, colonnades support the terrace garden. This resembles Diodorus’ description of the 14-foot long stone beams supporting each level of the garden. 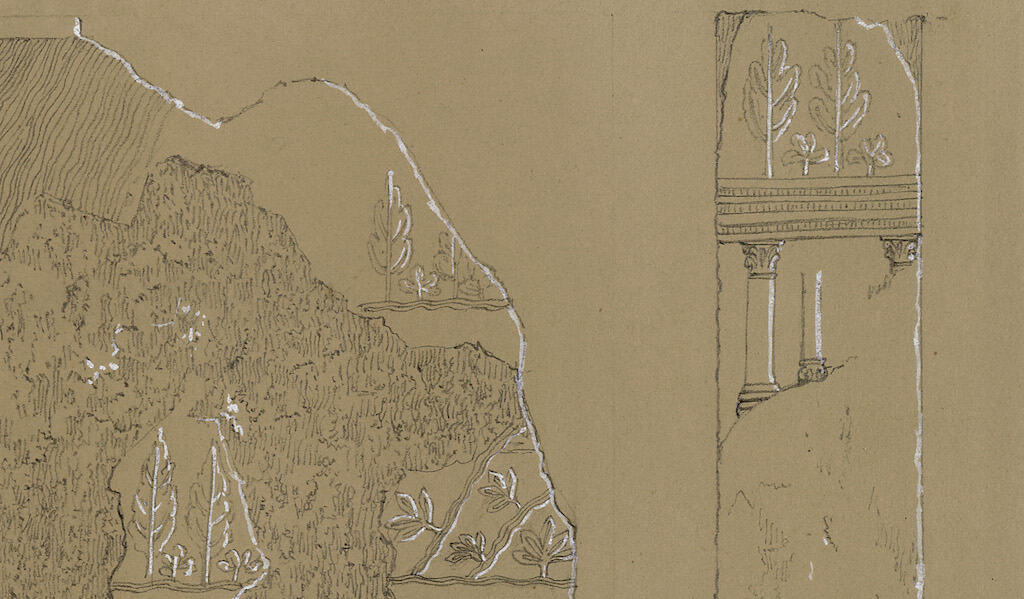 Was it Sennacherib’s Hanging Garden that became the World Wonder? Nobody knows for sure. Perhaps there were multiple gardens worthy of distinction. After all, beautiful gardens were not uncommon in Mesopotamia. The female ruler who later became known as Semiramis may have indeed built wondrous gardens. However, writers who came during the Hellenic Age gave descriptions that bear similarities to Sennacherib’s inscriptions and bas-reliefs: the machinery that hoisted water, the rise like a theater, the stone pillars, the variety of plants and trees.

If the Hanging Gardens never existed in Babylon, how did ancient historians get it so wrong? Babylon was a city. However, during various periods, the Babylonian Empire, or Babylonia, grew or shrank depending on conquests. Similarly, the boundaries of the Assyrian Empire fluctuated. Sennacherib crushed Babylon and took over the city, becoming “King of Babylon.” In the same century that Sennacherib died, Babylon conquered Nineveh. Could ancient historians have confused Nineveh’s gardens as being in Babylon because they thought of Nineveh as being a part of the Babylonian Empire?

Thanks to Dr. Dalley and other archaeologists, there are more clues today that hint at the prior existence of a wondrous garden, not in Babylon, but Nineveh. Whether or not it was the Hanging Garden that made the “Top Seven” list of ancient wonders, we may never know. But all the best evidence on hand today points to Sennacherib’s capital city.

Dalley, Stephanie. “The Mystery of the Hanging Garden of Babylon: An Elusive World Wonder Traced by Stephanie Dalley.” Goodreads. August 01, 2013.

Linen Book of Zagreb – A Mummy With...

The Shell Grotto of Margate is a Complete...