Oak Island is a small forested enclave in Mahone Bay off the coast of Nova Scotia, Canada. Since the late 1700s, a legend has existed that portrays the island as the site of a vast cache of hidden treasure. The exact origin of this story is contentious, but its effect, as stories involving treasure often are, was infectious. Over the years, wealthy investors squandered many millions of dollars, and six men lost their lives treasure hunting on the island in what many consider to be a curse. The main shaft rightfully earned its name as the “Oak Island Money Pit,” and to this day, eager hunters are still gripped by the hope of buried treasure. 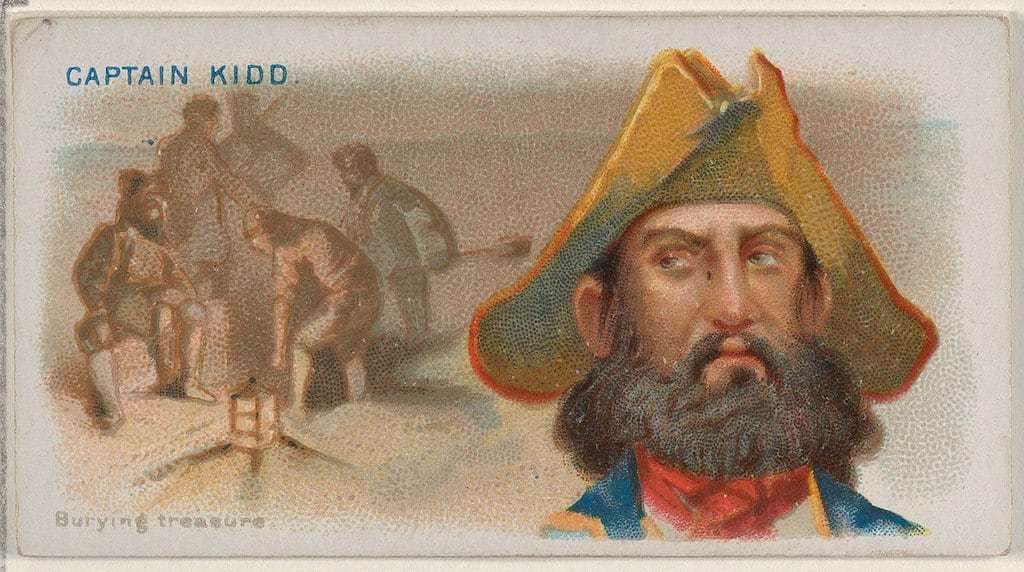 The Legend and Curse

The island has been the subject of supernatural beliefs and legends for hundreds of years. In the 1700s, locals believed that it was home to spirits and a ghostly black hell hound with piercing red eyes. In fact, the deaths of two fishermen were purportedly the result of haunting lights on the island. Additionally, they suspected that pirate treasure was buried somewhere there. However, their superstitions kept them far away from the area.

During the early days of treasure hunting on the island, another legend surfaced. It said that the island held a dark curse and that someone would indeed find treasure there but not until seven men and all the oak trees on the island died first. So far, six men have died along with all the red oaks on the island.

Discovery of the Money Pit

The original story of the Oak Island treasure may have surfaced in a 1795 newspaper. How much truth there was in the tale is unknown, however, it told of 16-year-old Daniel McGinnis who was casually exploring the island one day. He stumbled across an unusual oval depression in the ground. Above the depression, McGinnis could see an oak branch that appeared to have been used in a pulley system. In McGinnis’ mind, the scenario suggested that someone had lowered something heavy and possibly of great value into a pit at that very spot. 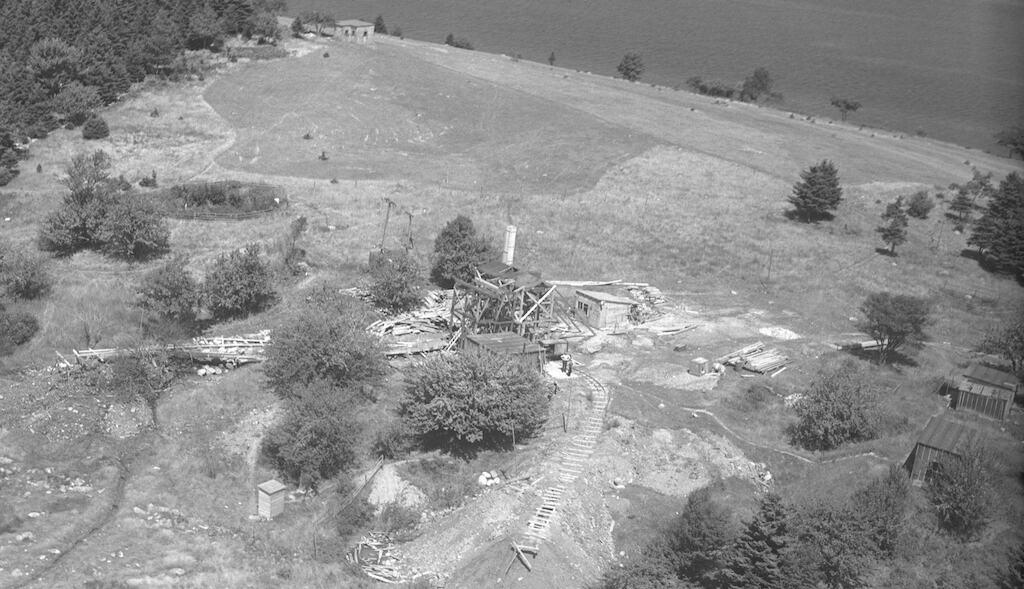 McGinnis enlisted the help of two friends to excavate the soil under the branch. As they dug down with their shovels they came across a layer of flagstone. This is a type of sedimentary stone that does not normally occur at that modest depth. Oddly, the stones appeared as though someone had intentionally shaped and fit them together.

Under the stones, they found a shaft that was about 12 feet wide. Clay and logs fortified the shaft. At the ten-foot mark, they found a platform of oak logs, under which the shaft continued on. Two more log platforms at 20 feet and 30 feet perplexed the teenagers, and they realized they had stumbled upon something much bigger than they could handle. However, at that time, none of the locals wanted to help them, due to their superstitions about the island. Years later, McGinnis found some investors to back the first official treasure hunting venture.

It wasn’t until 1810 that the McGinnis party received help from the Onslow Company. This was a coalition of wealthy businessmen that viewed this as a major investment. Their goal was to aggressively dig the shaft and find the treasure within weeks. As the excavation progressed, they came across layers of oak beams, coconut fiber, clay, and charcoal at every ten-foot interval. This pattern continued for nine levels when they came across a coded stone tablet with strange runes. 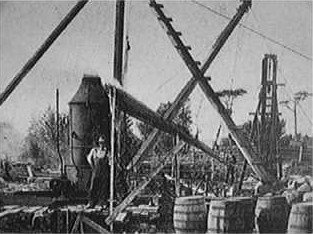 The workers did not know the meaning of the symbols on the stone, so they removed it and continued their dig. Once they got down to 98 feet, they hit something metallic and thought they reached a chest. But their excitement quickly faded as the shaft flooded overnight. They attempted to drain the chamber to no avail. It was later assumed that the people responsible for this hidden treasure created some type of a water trap supplied from nearby Smith’s Cove to prevent looters from gaining access to the treasure.

Today, the existence of the stone tablet has been brought into question because no one has been able to locate the original. Supposedly, the translation of the text read, “Forty Feet Below Two Million Pounds Are Buried.” 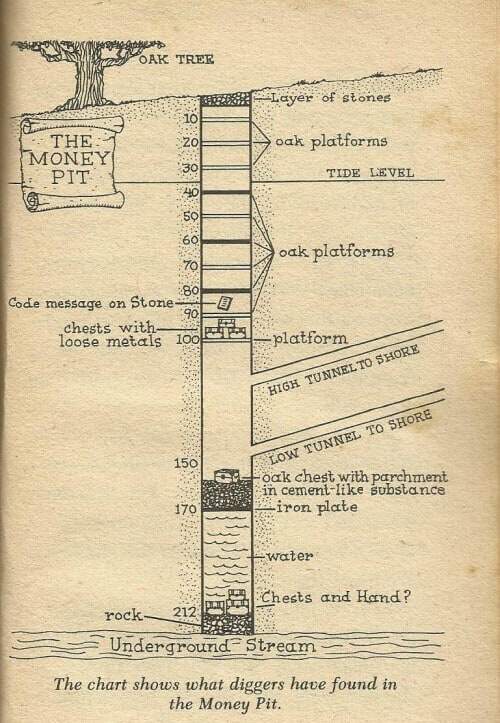 Discoveries and Features on Oak Island

The Truro Company took over from the Onslow Company after they eventually backed out of the project. Truro used a drill to obtain core samples of Earth in which they found links of a gold chain.

In 1971, a video camera lowered into the shaft purportedly imaged a severed hand and a possible treasure chest. Since the video footage in 1971, the shaft has collapsed and exploration has since ceased.

Smith’s Cove is another anomaly on the island. After almost three centuries of sporadic excavation, an artificial beach has been created. This is confusingly referred to as “The Swamp,” even though there is an actual swamp on the island already. To compound the mystery, there is vast evidence of very early artificial manipulation of the landscape by humans. One theory is that the island is literally two separate islands that someone artificially morphed together purely to confuse would-be treasure hunters.

Other Pits on the Island

The potential treasure sites are not contained to the Money Pit alone. There are six in total.

In 1995, the Woods Hole Oceanographic Institute conducted a survey of the area and concluded that natural factors were likely responsible for the layering of various stone and logs in the “shaft.” Furthermore, the various efforts to dig other diagonal and parallel shafts near the original site have made it difficult to determine which shaft was the original Oak Island Money Pit. To compound the issue, claims of gold links and murky video footage have either come from secondary sources or of dubious origin. The same can be said for the mysterious encoded stone tablet.

There have been numerous purchases for plots of the island ever since word of treasure first surfaced. Finally, in 2006, Rick and Marty Lagina bought into the primary land share after winning an auction. They and their partners own somewhere around 78 percent of the island under a joint business.

As children, the brothers had a fascination with the site and visited a number of times throughout their youth. Their energy and investment paid off after eight years of running the project themselves. In 2014, the History Network started airing The Curse of Oak Island featuring the Lagina brothers. Now in 2019, the show is still ongoing. Whilst there are other teams on the Island, the Lagina brothers have, by far, the largest operation. 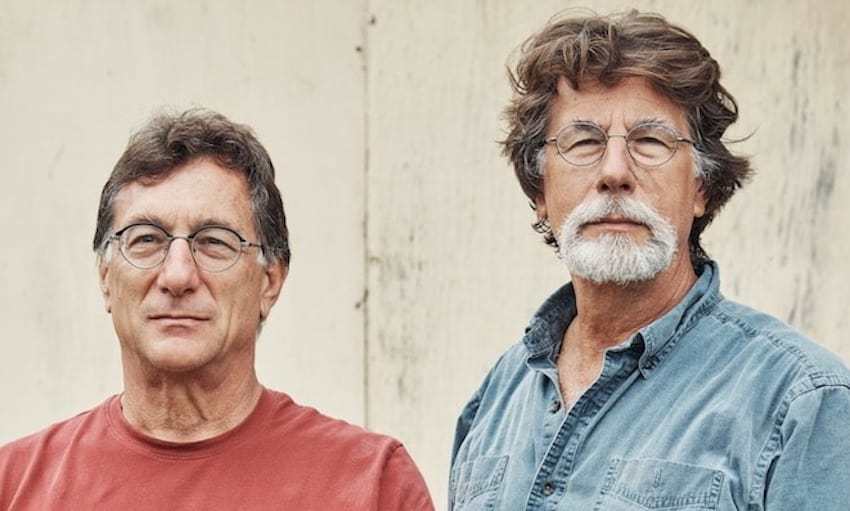 In 2014, the Lagina party purportedly made a small but perplexing discovery of a 17th-century Spanish copper coin. In the same year, they discovered clay and wooden structures within the Money Pit. This reinvigorated the lost vault theory created by William Chappell in 1897. One year later in 2015, the duo happened upon a chamber with side passages 235 feet below 10X containing a box or chest. However, they are yet to reach this chamber.

Legends of the Treasure: Pirate or Masonic?

Two primary origin tales have come to light over the years regarding where the treasure may have come from. The first is that the pirate Captain William Kidd buried it on the island. The only credence to this story is that the Scottish pirate was known to have been in the Nova Scotia area at some time in his later life when he buried his proverbial big haul. However, a portion of Kidd’s pirate booty may have turned up in 2015 off the coast of Madagascar.

The second legend has a far more Masonic lineage indicating that the Freemasons may have had a role in the legend of Oak Island. In the story, the alleged runes or characters on the stone tablet are supposedly in a Masonic language. It may have also contained the secret name for God.

But, this story about the island and the story of the Arch of Enoch in Freemason lore sound very similar. Interestingly, though, many of the investors, including both John Wayne and Franklin D Roosevelt, were prominent Freemasons.

It’s hard to know how old the legend of Oak Island treasure is or where it originated. Like any other mystery, the story evolved many times, and just how much truth exists is unknown. Sometimes an intriguing tale may prove much more lucrative than the subject of the legend. This seems to be the case with the island, which has been excavated extensively in vain. However, the legend bolsters the tour industry there, and then, of course, there is the TV show.

On the other hand, “there is likely a substantial amount of gold and treasure hidden in shallow water, stashed in caves and buried on isolated cays. Even in today’s modern digital world, there is a lot of lore about buried pirate treasure and secret maps, and at least some of that legend likely has roots in reality” (Goldco).

This may give us hope as we wait in anticipation for the next big find . . . but will it be on Oak Island? According to the famous legend, one more person has to die before we can find out.

Reasons Why Some Think Queen Elizabeth I Was...