Somewhere in the green hills of Bedford County in southwestern Virginia, lies a buried treasure worth over an estimated 60 million dollars. Named after Thomas J. Beale, who purportedly buried the trove, the Beale Treasure of gold and silver and jewels has languished in the ground for two centuries. The only clue to its whereabouts is a three page coded message known as the Beale Ciphers. 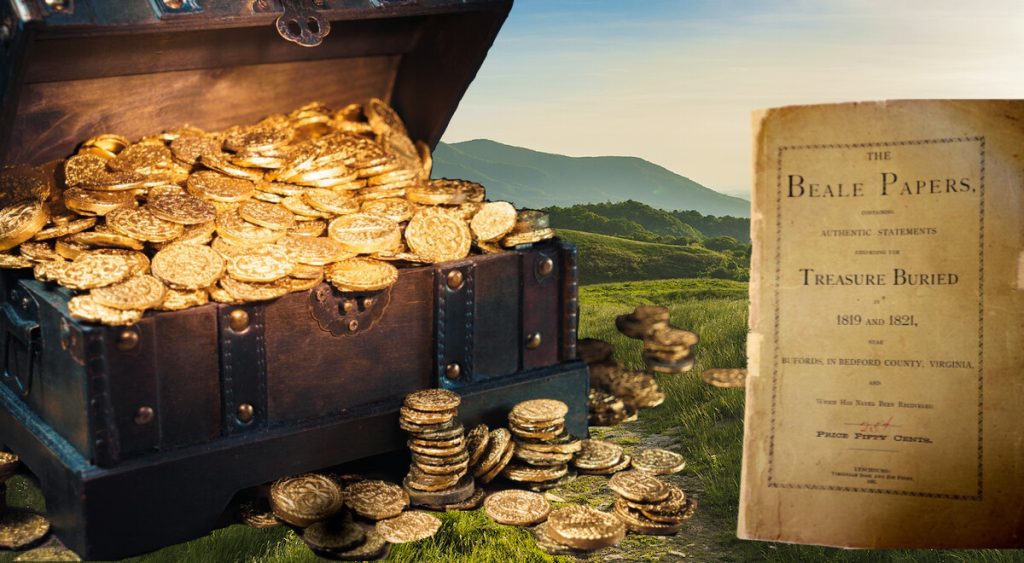 The Beale Treasure pertains to millions of dollars of gold, silver, and jewels allegedly buried in the mountains of Bedford County, VA.

The story has fascinated people and treasure hunters since 1885 when James B. Ward published a pamphlet called “The Beale Papers,” written by an anonymous person who acquired the Beale Cipher from a hotel proprietor named Robert Morriss.

The story begins in January 1820, when Thomas J. Beale checked into the Washington Hotel in Lynchburg, Virginia. Beale told the proprietor, Robert Morriss, that he was from Virginia. He was with two other men, all of whom appeared to be gentlemen of substance. The two other men left a few days later bound for Richmond, but Beale remained through the winter.

According to Morriss, Beale was a pleasant guest. Other hotel tenants found him to be popular, especially the women. A good listener, he revealed little about himself. Beale mention being familiar with southwestern Virginia, north of Roanoke. That fact became significant later.

In March 1820, Beale’s two friends returned, and after a few days, the three of them departed. Nearly two years later, during the winter of 1822, Thomas Beale returned to the Washington Hotel, where Robert Moriss welcomed him. The winter passed quietly.

In March of 1822, Beale called the innkeeper to his room. He pulled out a locked iron box and gave it to Morriss. Beale emphasized the box’s importance and requested the proprietor keep it safe until Beale returned. Moriss stored it away and forgot about it until he received a letter from Beale, dated May 9, 1822. Beale was in St. Louis at the time he sent the letter.

Letter and the Ciphers

In this letter, Beale told Morriss the box contained papers upon which the fortunes of many men depended. Three of the documents were written in cipher, requiring a key to interpret. Beale promised he would leave the information needed to analyze the ciphers with a friend in St. Louis and, should he never return, the friend would mail that envelope to Lynchburg in 1832. He asked Morriss to open the box on that year if he never heard from Beale again. 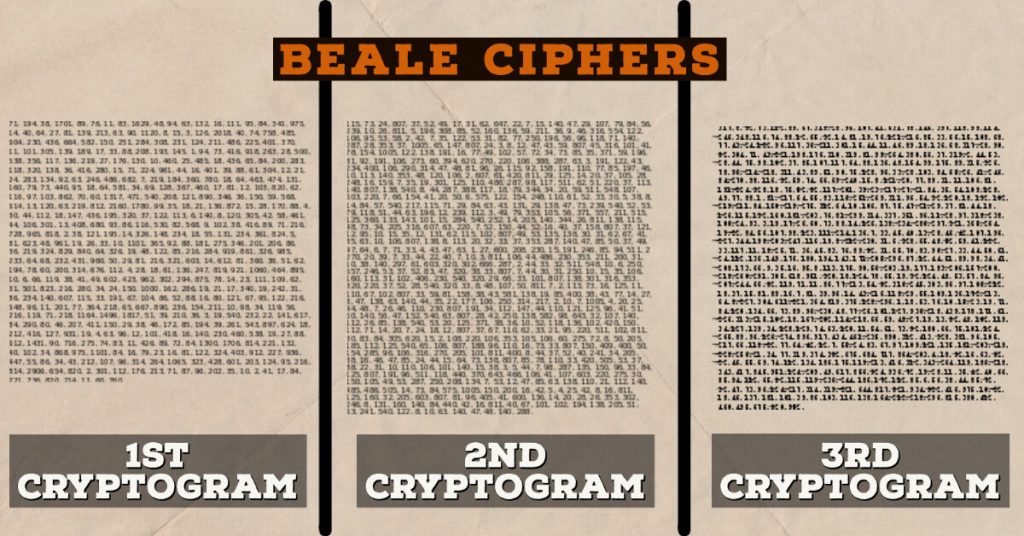 The Beale Ciphers consisted of these three cryptograms.

Beale disappeared. Morriss occasionally thought about the box, but he waited until 1845 to break open the lock since the key to the ciphers never arrived. The box contained three sets of papers, totally unintelligible with numbers carefully printed on them. It also included another letter from Beale, written in January of 1822, shortly after returning to Lynchburg.

Beale’s letter provides some background to this alleged treasure. In 1817, a group of thirty young, affluent, and well-educated men set out from Virginia to find adventure in the West. They traveled to St. Louis, where they geared up for buffalo and bear hunting. They employed guides, who advised to organize themselves as if they were a military unit. They elected Beale as the leader.

The group proceeded on to Santa Fe, where they stayed the winter. On a buffalo-hunting expedition a couple of hundred miles north of Santa Fe, some of the young men discovered a vein of gold. They spent the next two years excavating the gold as well as some silver they found.

Because they were in a dangerous land, they decided to send the treasure back with Beale to Virginia to hide in a cave near Buford’s Tavern in Buford, not far from Roanoke. The first time Beale arrived in Lynchburg, he buried half the treasure. But not in the cave, because farmers utilized the cave for storage. When he appeared at the Washington Hotel in January of 1822, he buried the remaining treasure in the same place.

Deciphering the Secrets of the Beale Ciphers

Robert Morriss spent many hours of his life trying to decipher the cryptograms without success. In 1862, he passed the burden on to a young man whose identity remains anonymous. Morriss died the next year. This unidentified man spent the next twenty-three years trying to unlock the secrets of the Beale Ciphers. Ultimately, he unlocked the key to one of the three. The key was the Declaration of Independence.

Finding the key stemmed from the letter J in Beale’s middle name. Some say it is Jefferson. The anonymous person decided to use the Declaration of Independence as the key because the primary author was Thomas Jefferson, whom Thomas Jefferson Beale was most likely named after. It worked for the second cipher. It read:

I have deposited in the county of Bedford, about four miles from Buford’s, in an excavation or vault, six feet below the surface of the ground, the following articles, belonging jointly to the parties whose names are given in number three, herewith:

The other two ciphers, allegedly detailing the adventurers’ names, their immediate heirs, and, more importantly, the location of the treasure.

They both remain undeciphered. At least, no one has ever admitted to breaking the code.

The unknown friend, who Robert Moriss gave the papers, finally admitted defeat and handed the documents to James B. Ward. Mr. Ward decided to go public with the Beale treasure.

James Ward wrote his pamphlet on the Beale Papers in 1885. While most of it burned in a warehouse fire, enough copies circulated to excite quite a few people. Since 1885, hundreds of treasure hunters have descended to the Montvale, Virginia area, which used to be Buford. They used shovels, picks, metal detectors, backhoes, even dynamite in their search. Prospectors even consulted mediums and astrologers. Some of the best cryptoanalysts in the world have devoted their time to trying to break the code. The Beale Ciphers are still unbroken.

James B. Ward’s pamphlet on Amazon: The Beale Papers: Containing Authentic Statements Regarding The Treasure Buried 1819 and 1821, Bufords, in Bedford County, Virginia, Which has Never Been Recovered

The Beale treasure remains unaccounted for, at least as far as we know. Some theorists suggest someone dug up the treasure long ago. Others believe the whole thing is a hoax. They point to similarities in the writing of Beale and James B. Ward, the pamphleteer. Beale’s letters contain words that were not in the English lexicon in 1820.

An attempt to identify Mr. Beale by looking at the 1820 census proved unsuccessful. The census listed two males with the last name Beale. Unfortunately, missing data from three other states made this search fruitless.

Until officially debunked, people will continue to believe that over $60,000,000 in gold, silver, and jewels lies buried in the Blue Ridge Mountains. It drives them to repeated attempts to break the code and find the treasure.

Pope Joan: Did The Church Elect a Female...