Grave of the Lady with Parasol: Tomb 9890 Pontecagnano

Ancient graveyards and tombs are the windows to the past and tell us about our enigmatic ancestors. Since 1962, excavations of a vast necropolis in Pontecagnano, Italy, exposed more than 9,000 tombs dating from 3,500 BCE to the third century CE. In June 2017, a rich chamber burial from the third century BCE was unearthed, Tomb 9890. This monumental discovery is the only chamber in the area containing paintings of a figurative scene on its walls and is affectionately called The Grave of the Lady with the Parasol Umbrella. 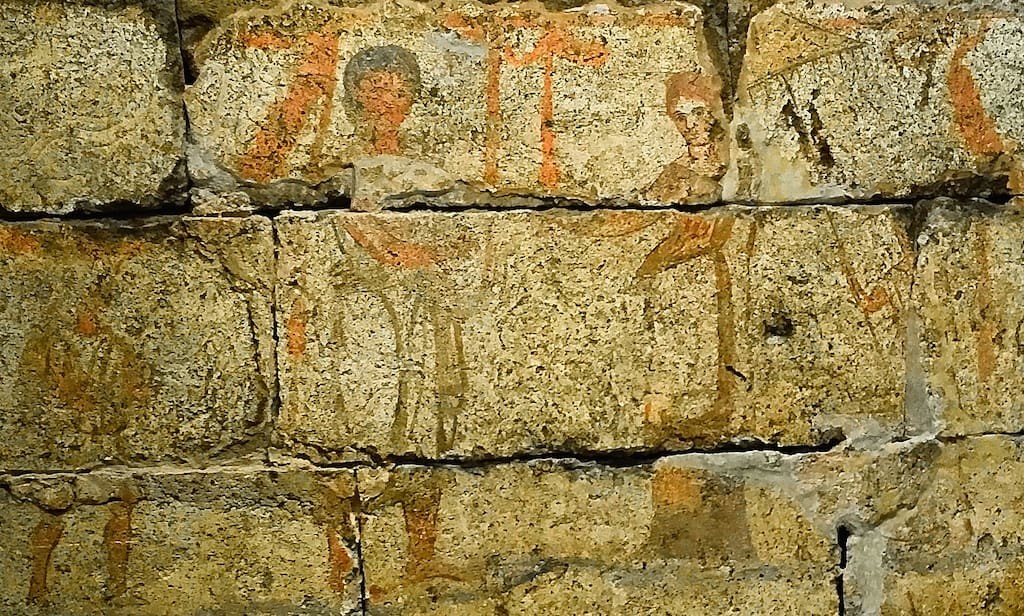 The Lady with the Parasol Umbrella is an unusual tomb painting from T. 9890, Pontecagnano, Italy. © Historic Mysteries.

Pontecagnano, a town in the region of Salerno, Italy, sits atop an ancient urban Etruscan city presumably called Amina. The earliest people to settle the area were generally referred to as the Neolithic Gaudo culture. Subsequently, the pre-Etruscan Villanova people, the Etruscans, and then the Romans dominated the site. Romans later changed the name of Amina to Picentia. The Grave of the Lady with the Parasol Umbrella was created at the end of the Etruscan phase and the beginning of Romanizing period.

Built sometime in the middle of the third century BCE, Tomb 9890 served at least two generations of burials. Use of the tomb ended around the beginning of the second century BCE. This was a time of social upheaval, and as new groups moved into the area around Pontecagnano, funerary costumes and grave deposits became much more lavish. The Grave of the Lady with the Parasol Umbrella is an outstanding example of such a tomb.

The exquisite chamber tomb, which is not yet open to public viewing, is still undergoing restoration at the National Archaeological Museum of Pontecagnano. A private tour of the tomb revealed the entire structure sitting in the middle of a large basement room. In the left-hand corner closest to the entrance, a small table holds the brushes and tools for the archaeological restoration in progress. 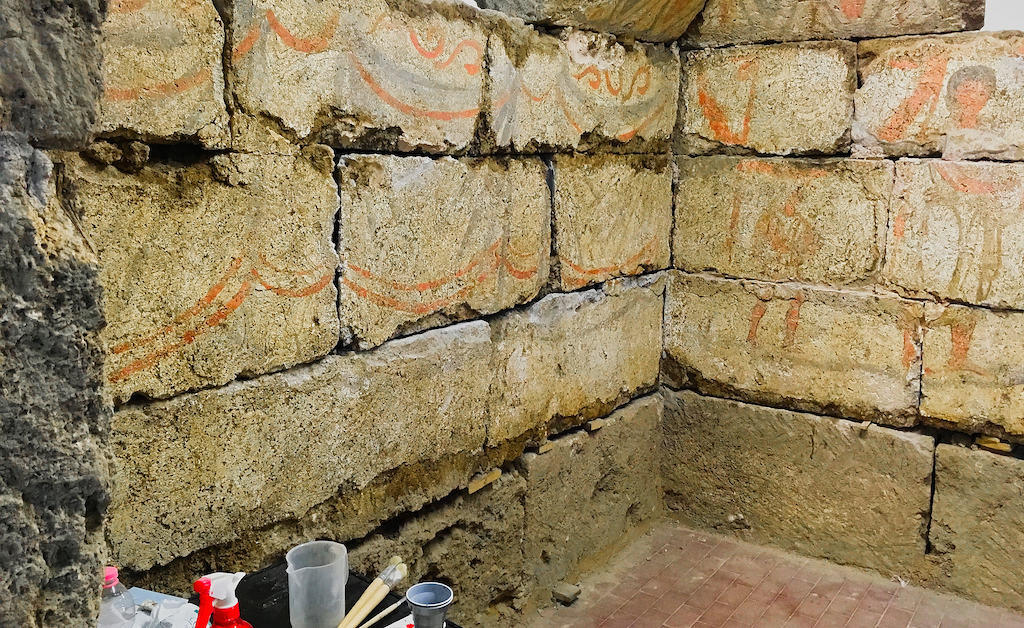 Archaeologists are currently restoring the painting in Tomb 9890. © Historic Mysteries.

Large square travertine blocks of about 2 feet by 1½ feet make up the walls. The blocks are stacked and overlap the lower row. Each wall stands a little over 4 feet high and about 9 feet long. Lime mortar covers the walls, three of which are painted. On their surface, the decorations and central scene with human figures contain pigments of red, yellow, and black.

Scene of the Lady with the Parasol Umbrella

A beautiful portrayal of a man and a woman adorns the center of the main wall facing the entrance. The couple is reaching out toward each other with their right arms. Painted red and black velaria, or veils like an awning, run along all the walls inside the tomb. To the right of the woman, another smaller female leans in to hold a parasol over the woman’s head. She is probably the handmaiden of the woman. On the left of the man, there is another smaller man whose identity is unknown.

The woman has her hair gathered neatly away from her face which holds a strong expression. She is wearing an elegant red full-length gown with a pointed bodice framed in ochre and red. On her lower half, she wears a white cloth wrap, a stola, which is somewhat like a toga. The bottom of her dress is bordered in red and ochre, and a shawl covers her shoulders. Is the deceased woman’s husband greeting her in the afterlife? © Historic Mysteries.

The man has short black hair and no beard or mustache. He is wearing a tunic that ends at his shins, while a dark belt cinches his garment around his waist and dangles. The other two smaller figures are also wearing white tunics. Experts believe the small male on the left may have a red cloak around his shoulders.

Meaning of the Tomb Paintings

The scene of the man and the woman in the center is the main subject of the tomb painting. Experts postulate that the wavy black line under their feet may be a barrier that indicates the afterlife or the transference from life into the afterlife. “The scene probably represents the reception of the deceased woman in the afterlife by the man, perhaps a member of the family”(Baglivo et al. 2017).

Velaria running along all the walls may have been there to shield the figures from the sun and rain. In pre-Roman and Roman days, velaria did exactly that at places like the Colosseum and other arenas. The parasol is also an item of protection from the elements and, together with her maid and the velaria, may signify a sense of luxury and comfort in the afterlife. However, experts plan to conduct further analysis after the restoration is complete.

Geraldine Sachau, of the Jean Bérard Center (CNRS/École française de Rome), collaborated in the excavation of the Pontecagnano tomb. The room contained three walls and the enclosure, which was barricaded by a double wall door. Inside, three funeral beds lined the walls of the tomb. Additionally, travertine blocks that served as headrests separated the beds.

Grave of The Lady with the Parasol Umbrella at the original site. Credit: Baglivo et al.

At some point after the closure of the tomb, a flood inundated the necropolis. As a result, the grave deposits in Tomb 9890 moved from their original places.

Three bodies were inhumed in the tomb, however, at least two other grave deposits existed. The east wall on the left of the entrance contained the remains of a male. Only a few bones were in place on the bed, along with an iron strigil (a scraping tool for cleaning the skin). Archaeologists found more of the man’s bones and another piece of the strigil, a few jars, and a pitcher on the floor of the tomb. Those items probably also belonged to his grave. The flood had displaced his skull which was laying on a different bed on the south wall (directly under the figured painting).

The funerary bed on the south wall contained the remains of another inhumed male. However, his collection of grave goods was not the only deposit there. Directly under him, they found a loom weight, an ointment, and a lid that probably belonged to an older female grave deposit.

Against the right of the entrance on the west wall, a third grave bed held the inhumed bones of a female along with a rich deposit of goods. Her skeleton had been pushed toward the wall to make way for another deposition of grave goods.

Around her head lay many bottles and jars. A loom weight, a small container with a brown decorated and varnished lid, and a bone pin also accompanied her. Lower on the bed there were wooden slats that once formed a box. A bronze lock, bronze mirror, a comb, bronze spindle, bone objects, and a decorated container of pink make-up powder were also among her goods. At the foot of the bed sat two large ceramic jars. Additionally, laying on the floor there were many other painted and decorated bottles.

Sample of objects found in the female grave of the west wall. Credit: Baglivo et al.

A Journey in Comfort

For the ancient cultures of Italy, it was up to the living to ensure that the dead could transition to the afterworld. Thus, prosperity and one’s ability to survive life after death depended very much on the funerary rites they practiced and the items placed in their tombs.

Elaborate tomb paintings surely signified the wealth and status of a particular family (most could not afford such lavish tombs). However, the scenes may have also served as a source of comfort for the dead during their journey into their new life (Cartwright). As for the scene in The Grave of the Lady with the Parasol Umbrella, it would have been a relief to think that someone, perhaps a husband, was waiting with an outstretched arm on the other side.

Special thanks to the National Archaeological Museum of Pontecagnano. For more information see their website.

The Great White Pyramid of China