Few animals can transcend all cultures and all civilizations the way the humble dragon can. The Chinese Dragon, like the Welsh counterpart, is known the world over. Old English stories of how St George slayed the dragon are still used as prime examples of how to overcome long odds and triumph. There is a fearsome dragon from Polish folklore that isn’t immediately well known around the world. One of the oldest and most endearing legends tells of Smok, the Wawel dragon.

Wawel Hill can be found along the Vistula River in Poland and is famed because of a medieval castle and Cathedral. Not too far away stands the former Polish capital city of Krakow. This city, steeped in much of Poland’s ancient history and heritage, was named after King Krak in the 7th century.

The Home of the Wawel Dragon

It was around this time in history when the city was a much smaller and more humble place. Many of the residents there were happy to farm the lands and swap campfire stories once the Sun had set. The more senior of the farmers would tell stories about Smok and how the dragon was evil with a lair found on the side of Wawel Hill. The entrance to this cave was obscured by brambles and general overgrowth. Anyone that found the entrance was reticent to enter it, for fear of awakening the notorious beast. Five youths decided to test this assumption and prove once and for all that all of these stories were precisely that – stories.

Ignoring the warnings from the elderly, the five armed themselves with torches and pitchforks and began their trek up the mountain. It took them quite some time to navigate the dense foliage before they found the entrance to a cave. There they stood, wondering whether or not to enter and trying to see if anything was waiting for them. Their torches only allowed them to see so far and so much, so they decided to enter after all.

The inside of the cave was said to be narrow and cast grotesque shadows of themselves onto the walls. The last thing the youths wanted was to be seen abandoning their pursuit through cowardice. Onwards they continued, despite the malignant presence that they all felt. The more they ventured inside, the greater the sense of unease began to overwhelm. From further inside the cave, they could hear something breathing. It was deep and regular. Even this didn’t deter them. What finally settled things for the five was the sight of movement up ahead of them.

Something very large and covered in green scales began to stir.

Whatever they had stumbled across let out a bellowing roar and none of the five had any desire to hang around and see what the source of the noise was. So desperate was their panic to flee the scene, that they almost ran over one another to cover the largest amount of distance in the smallest amount of time. The hot breath of the Wawel dragon behind them inspired them all to run, stumble, stagger and roll just a little bit harder. At the bottom of the mountain, they all felt safe enough to finally get a good look at their pursuer. Smok was perched proudly on top of the hill they had just fled. The sharp teeth and flashing eyes that caught their attention began to head down the hill after them. Fortunately for the youths, Smok was more interested in one of the many cattle that grazed between hunter and hunted. Smok took one and returned to it’s lair.

Having aroused the Wawel dragon, daily life in the village took a turn for the worst. Every single day, something or someone would disappear. Sometimes a sheep, sometimes another cow, sometimes one of the villagers. Efforts were made to slay the ravenous beast, but the regular posse that was formed was no match for the formidable Smok. Numerous gave their lives to try and match the monster with their primitive weapons that barely made an impact upon it. 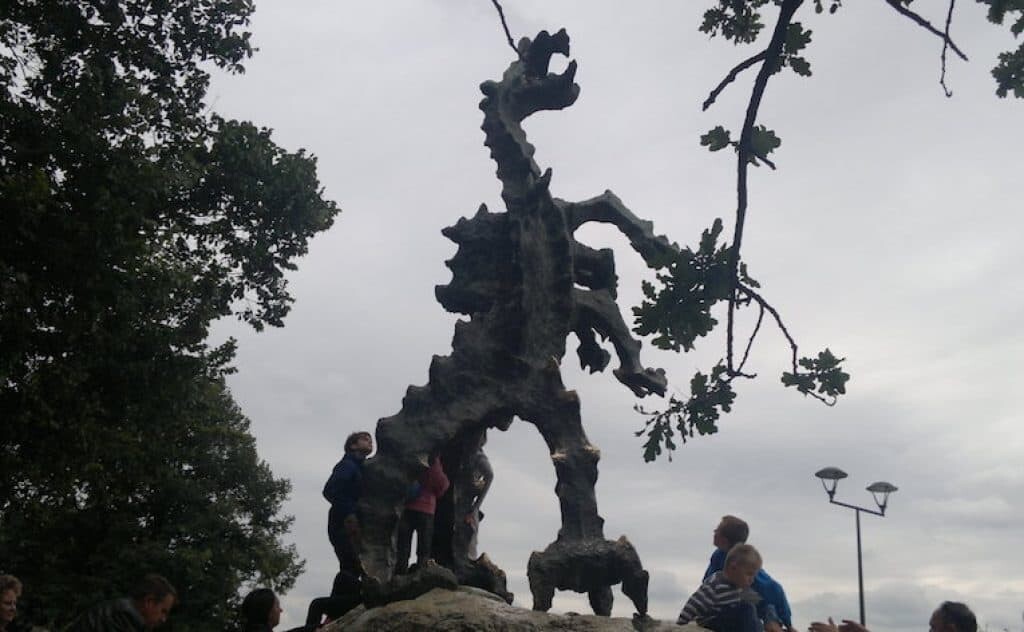 Some of the villagers turned to a local wise man named Krakus, who was considered to be a magician. Krakus accepted their requests to help, but before doing anything he carefully considered his options. After studying his herbs, Krakus began to create a paste. Once this was done, he demanded and received a sheep to baste. Krakus escorted this animal to the mouth of Smok’s lair and callously threw the poor sheep inside. Krakus and any brave witnesses remained on tenterhooks for several moments before Smok emerged and made a beeline for the Vistula River. Krakus had covered the sheep in a concoction designed to burn the inside of Smok. Legend has it that Smok drank so much water from the river that he exploded.

The villagers were so thankful that curse of their own making was vanquished, that they immediately installed Krakus as King and named the settlement after him. Magnificent structures were built in his honor and when he finally passed away, a state funeral was held. These days Krakow is immensely proud of their Wawel dragon legend. As well as the buildings that celebrate Krakus and his accomplishments, tourists can even signal fire from the metal dragon sculpture by texting SMOK to 7168. This is all done with natural gas in a much more controlled and safer manner than the sulfur Krakus was said to have used in his potion.