Angkor Wat: The Enduring Pride of the Khmer Empire

In the 12th century, King Suryavarman II built the largest and most resplendent religious monument in Cambodia. Meaning temple city, Angkor Wat lies about 3.5 miles north of today’s Siem Reap, southeast of the ancient capital in Baphuon. Although Cambodia has hundreds of beautiful temples in its dense jungles, Angkor Wat is the most famous. 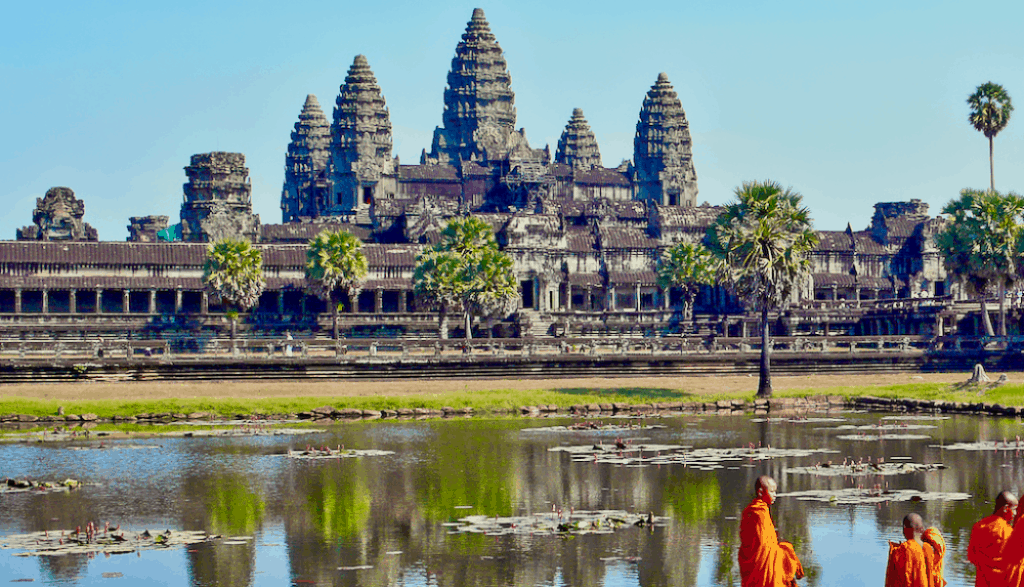 Angkor Wat is the most impressive temple of the Khmer Empire. Wikimedia Commons, Ekabhishek.

The Importance of the Main Temple

Most temples that came before Angkor Wat were dedicated to the Hindu god Shiva. However, this temple was different. Suryavarman II dedicated his masterpiece to Vishnu and faced it west (the direction associated with Vishnu), instead of east. The skilled architects designed the temple and grounds to represent the universe, including the ocean and a mountain temple to house the Hindu gods.

Additionally, it lay in a most auspicious location at the center of the capital city of the Khmer Empire. The temple served as a testament to the wealth and power of Suryavarman’s vast kingdom. It is by far one of the most stunning examples of artistic architecture and a statement of lasting religious devotion. This is the only temple in Angkor that worshippers have consistently utilized since its construction. It has never fallen into disuse. However, Angkor Wat is just one temple in the Siem Reap province of Cambodia, which is home to the Angkor Archaeological Park.

The Age of Angkor

The park is one of the most important archaeological treasures in Asia consisting of a complex of hundreds of temples and shrines in Angkor. In order to protect the temples within the site, the park became a UNESCO World Heritage Site in 1992. The huge area covers about 400 square kilometers or 154 square miles, and many of the different temple sites were once various capital cities of the Khmer Empire. At the height of Angkor, more than a million people lived within its boundaries. In fact, researchers Evans et al. described it as “the world’s largest preindustrial settlement complex” that also boasted a most sophisticated water-management system.

Many scholars agree that the “Age of Angkor” began around 802 CE when a Brahmin priest declared the Hindu ruler, Jayavarman II, a devarāja or universal god-king. The religious significance of this is explained in the following excerpt from Brittanica:

The devarāja cult grew out of both Hindu and indigenous traditions. It taught that the king was a divine universal ruler, a manifestation of the Hindu god Śiva, whose divine essence was represented by the linga (or lingam), a phallic idol housed in a special mountain temple. The safeguarding of the linga became bound up with the security of the kingdom, and the great temple architecture of the Khmer period attests to the importance attached to the belief.

Founder of the Khmer Empire

Records indicate that before Jayavarman II became king, the Southeast Asian region consisted of many smaller feuding groups. Jayavarman II conquered the areas of Cambodia into Laos and united the Khmer people of Southeast Asia and founded the Khmer Empire. Subsequently, a grand celebration and ceremony took place on the Phnom Kulen plateau of a beautiful mountain range in the Siem Reap province. At the ceremony, Jayavarman II became the universal monarch or god-king and he declared independence from “Java” (scholars are divided as to whether Java meant the island or the neighboring Cham people). He placed the new capital in the area of what is now Roluos, and he named it Hariharalaya after the Hindu god, Shiva. King Jayavarman II constructed the Phnom Kulen and Kutisvara temples, which are now in ruins. 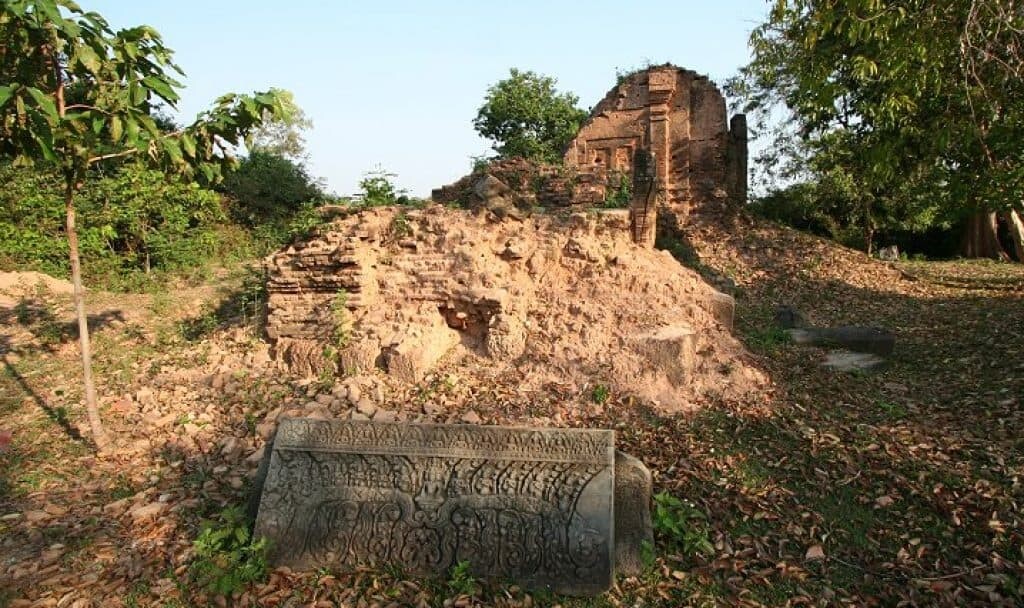 There were many temples in Cambodia that preceded Jayavarman II. However, the god-kings that followed him inherited a wealthy and powerful kingdom. Therefore, they built temples that became larger and more elaborate as time went on. Architectural styles changed throughout the period and culminated in the intricate Angkor Wat style and craftsmanship. Today, the region attracts millions of visitors each year. 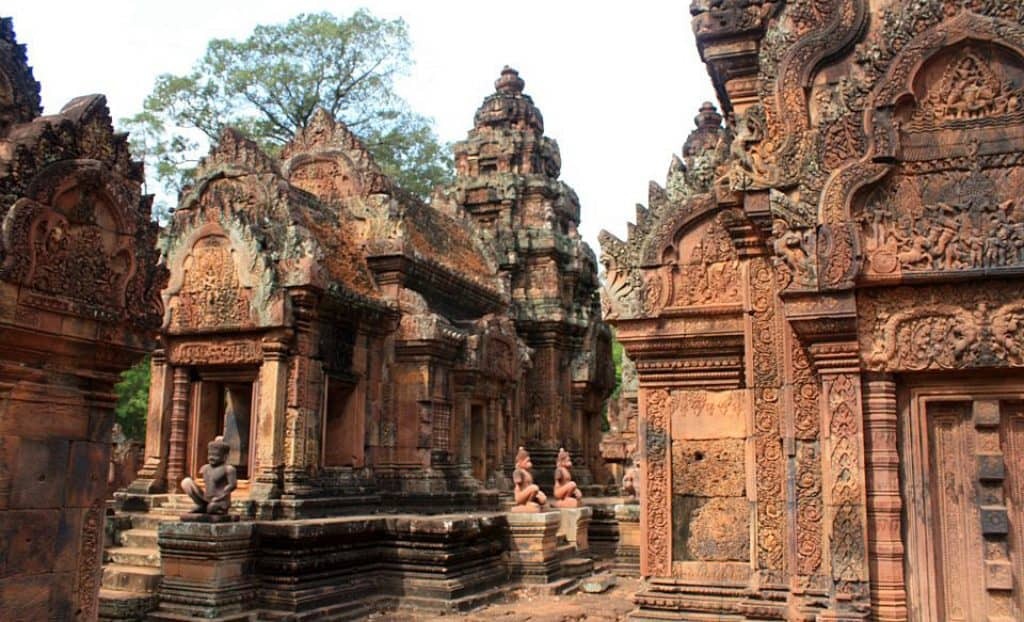 The primary materials used in the construction of Angkor’s temples were bricks, clay (laterite), sandstone, and wood. The only structures that were made of sandstone in the entire kingdom were temples. All other structures that consisted of wood, such as private homes and parts of temples, have since rotted away with time. Early Khmer builders used mostly bricks to construct temples, while later periods used sandstone, such as at the main Angkor temple.

Initially, the heart of each temple showcased a sanctuary or shrine dedicated to Shiva or Vishnu. Most of the Khmerian temples were dedicated to Shiva, however, King Suryavarman II dedicated his temple to Vishnu. Idols came in the form of a lingam (in the case of Shiva) or anthropomorphic statues. Angkor Wat once had a statue of Vishnu at its central shrine. At the temples, devotees worshipped Hindu gods, ancestors, and the god-kings.

The Magnificence of Angkor Wat

Although many beautiful temples came later, Angkor Wat still stands as the most stunning and renowned. This 12th-century masterpiece of the Khmer people is a pyramidal temple structure. It includes an outwardly extending complex that symbolizes cosmological and landscape elements. The entire temple covers an area of about 500 acres. There are three levels with galleries (halls or walkways) each higher than the previous. At the very center on the highest level of the temple, there are five tall towers. These represent the peaks of Mount Meru, the home of the Hindu gods. Outside the outer walls, a moat 620 feet wide symbolizes the ocean.

Related: Mysteries in the Plain of Jars, Laos 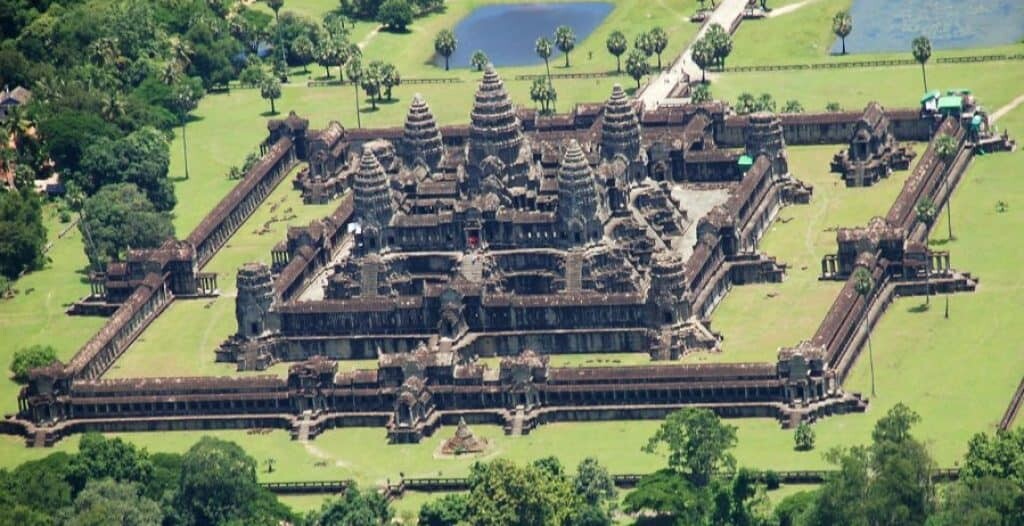 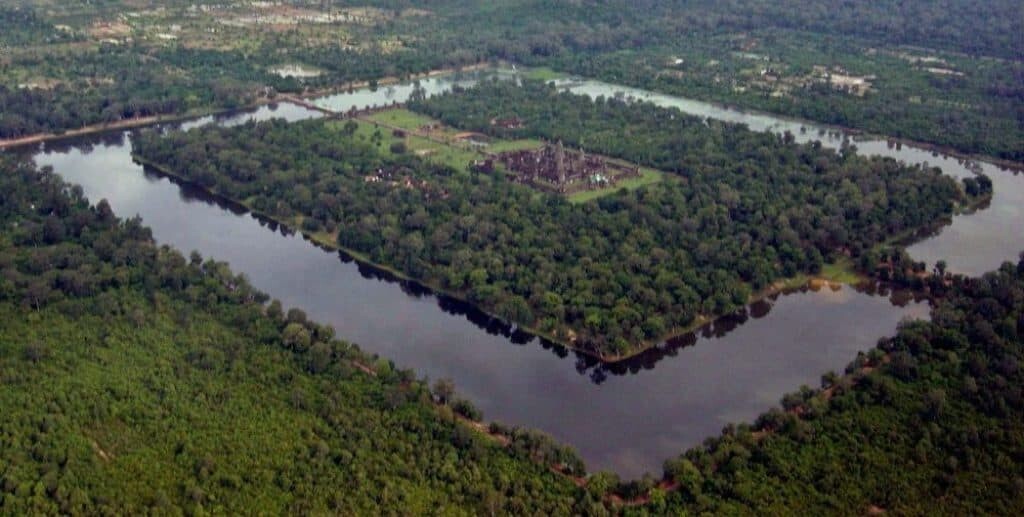 Builders used sandstone brick as the primary material in the construction of Angkor Wat. Quarries existed at the base of Phnom Kulen mountain. Until recently, one of the most perplexing historic mysteries pertained to how the Khmer people could have built this enormous temple in only 37 years. Initially, experts mapped out a visible route that was 54 miles from the quarry to the site. However, recently Etsuo Uchida and Ichita Shimoda from Waseda University in Japan studied satellite images. They could detect canals and roads that the jungles had swallowed up. This allowed the team to establish a new route that was only 22 miles from the quarry. Khmer workers hauled somewhere between 5 million and 10 million blocks from the quarry site to build the main temple.

It was resplendent with more than 1,860 carved apsara, or heavenly nymphs, and hundreds of meters of elaborate bas reliefs depicting the Hindu legends and scenes from contemporary life. Other temples dating to his [King Suryavarman II] reign include Banteay Samre, Thommanon, Chau Say Tevoda and, east of the capital, the huge Beng Mealea complex.

In 2015, news emerged about a study called the Great Angkor Project, which was led by the University of Sydney Professor Roland Fletcher and Dr. Damian Evans. The project utilized airborne laser scanning and ground penetrating radar with focused excavations. They made some interesting discoveries about Angkor Wat. The temple complex turned out to be larger than once thought.

Additionally, the scanning detected an immense structure not previously seen. The researchers call the patterned structure the “rectilinear spirals.” These consist of an area that has more than 1500 x 600 meters that flank the south side of the temple. Exactly what this structure was and its purpose are complete mysteries, and “has, as yet, no known equivalent in the Angkorian world” (Evans & Fletcher 2015).

End of the Angkorian Period

After King Suryavarman died around 1150 CE, subsequent rulers continued to build temples. Some examples are Angkor Thom, Preah Khan, Ta Prohm, and Banteay Chmar. The decline of Angkorian architecture seems to have been in conjunction with the Khmer conversion to Buddhism. This took place around the first half of the 14th century.

Angkor Wat emerged in the Golden Period of the Khmer Empire. The building survived through declining power and the total transition to another religion. Devotees never lost their vigor for the splendid temple, which has since become Theravada Buddhist. The central shrine that once housed a statue of Vishnu was converted, and Vishnu was removed and replaced with statues of Buddha. Today, more than 100,000 people still inhabit the Angkor Archaeological Park. Additionally, Buddhist worshippers continue to use the temple as a center of worship, while millions of people flock from all over the world to see the most amazing work of art, religion, and empirical power ever constructed.