For decades, the Taliban has been rooting out pieces of the pre-Islamic history of Afghanistan and destroying major historical sites. In 2001, the Bamiyan Buddhas, the tallest standing statues of Buddha in the world, as well as numerous other Buddhist artifacts in Afghanistan, were unscrupulously destroyed. In a matter of days, the monumental sculptures that had peered out across the valley for nearly 1,500 years, no longer existed. The Bamiyan Valley was once the only convenient passage through the Hindu Kush mountain system. One of the branches of the Great Silk Road that connected China with the countries of the west ran through this region and made Bamiyan a thriving trade outpost.

During this period of pre-Islam, Buddhism was one of the many religions that flourished in the region of Afghanistan. A complex of monasteries and living quarters numbering up to twelve thousand grottoes were carved directly into the mountains. The two Buddha statues that met with destruction in 2001 were part of this complex. According to the tales, there were many more large Buddha statues at different locations of the valley, including inside the caves, but none of the others survived modern days.

History of the Bamiyan Buddhas

The larger Western Buddha dating from 554 was 180 feet tall and represented Buddha Vairochana. The locals affectionately call the smaller Eastern Buddha “Mother Buddha.” It stood at about 125 feet in height. This Buddha Shakyamuni was the first one cut into the cliffside in 507. 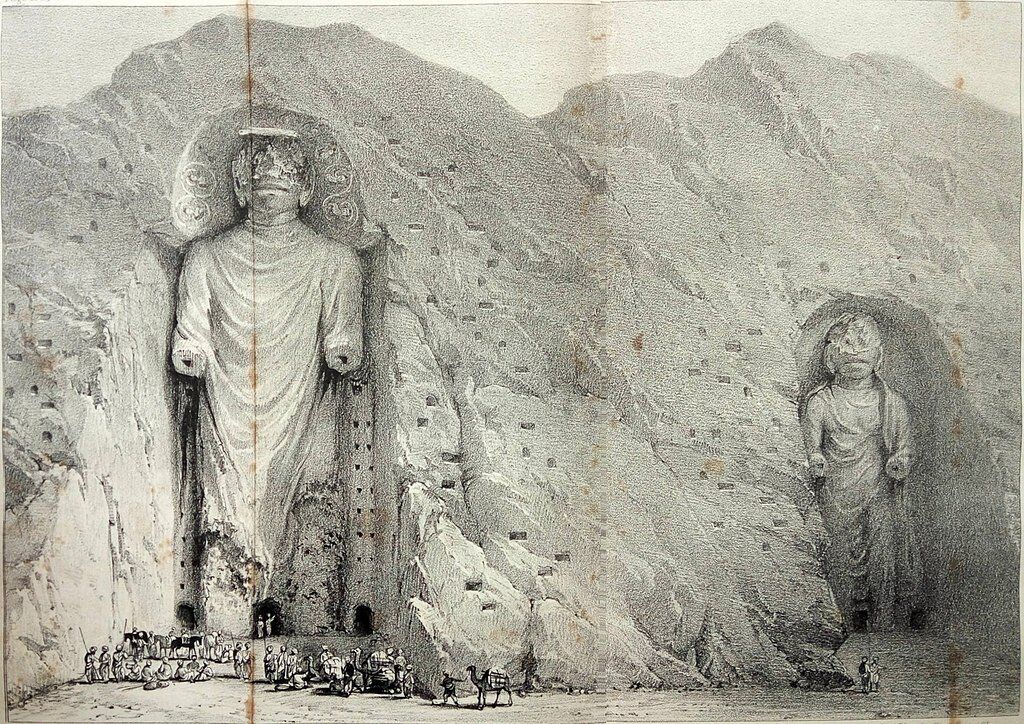 At one time, plaster and paint covered the figures. Additionally, they bore decorations of bronze, gold, and jewels — indications of how wealthy this region was back in the 6th century. The appearance of the statues leads historians to believe they were the work of the ancient Gandhara civilization.

In the 7th century CE, the Arab invasion of Afghanistan began, after which Islam replaced Buddhism in the region. In the 11th century, the Muslim state of the Ghaznavids annexed the valley and built a new city in Bamiyan. Despite the change of religious dominance, the Buddhist statues and hundreds of tunnels in the mountains survived. In fact, the Islamic group celebrated the wonderous figures.

In 1221, the armies of Genghis Khan wiped out the entire population of the region, but they, too, left the icons untouched. Surprisingly enough, there are few written sources about the Bamiyan Buddhas that archeologists and historians could find from the following centuries. The area’s rulers paid no attention to the statues until the 17th century. Emperor Aurangzeb of the Mughal Empire made the first known attempt to destroy them. According to reports, he attempted to demolish them using artillery but soon realized that it was not possible.

Later on, in the 19th century, Abdur-Rahman, Emir of Afghanistan, destroyed the face of a Bamiyan statue during one of his military campaigns. It is unknown whether it was done on purpose or by accident.

In 1996, the Taliban came to power and controlled most of the territory of Afghanistan, although not yet the Bamiyan province. They represented an extraordinarily conservative and intolerant movement of Islam that aimed to destroy everything from the pre-Islam history of Afghanistan. The smaller, “Mother Buddha” used to stand in this cavity seen from above. Public Domain

Once the Taliban took control over Bamiyan, Abdul Wahid (one of their commanders) wanted to fulfill his plans of destroying the Buddhas. However, the leader of the Taliban movement, Mullah Omar, issued a decree for the preservation of the heritage of Afghanistan that included sites and objects from all periods. Instead, the Taliban tried to use the Buddhist monuments as a tourist attraction in 2000. They even sent an appeal to the UN to fund the repair and reconstruction of the statues.

The Terracotta Army of the First Emperor of China

Unfortunately, the Taliban committed a series of destructive acts on the collection of pre-Islamic sculptures in the Kabul Museum. Consequently, this inflicted the rage of the international community, which, in turn, angered Mullah Omar. Perhaps in a gesture of revenge, he approved the annihilation of the Bamiyan Buddhas. 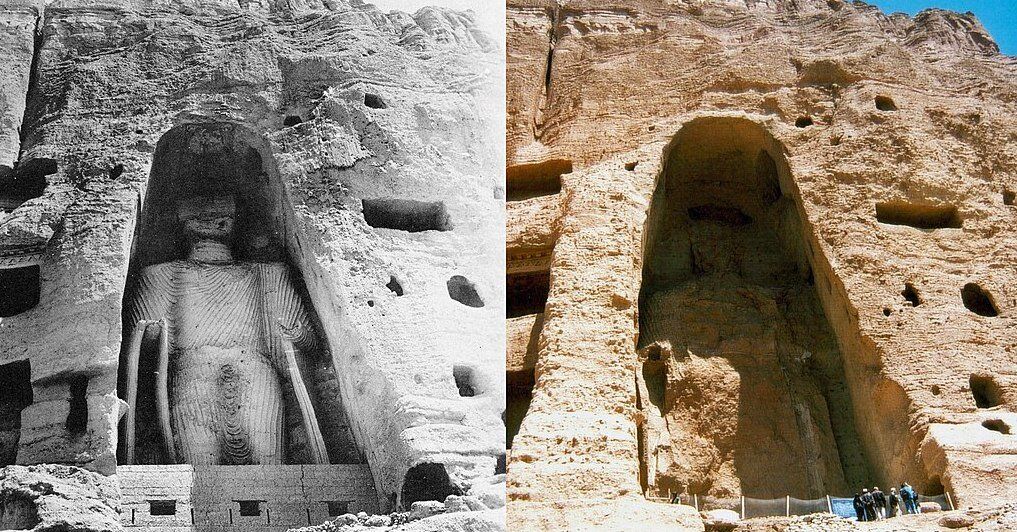 The international community ardently tried to convince the Taliban to abandon their plans and protect the heritage of Afghanistan. Secretary of the UN Kofi Annan appealed to the world for the protection of the Buddhas of Bamiyan. Several countries, including Japan and India, wanted to transport the statues away from the Taliban territories to ensure their survival. Even the Organization of the Islamic Conference, with all its 55 Islamic states, chimed in. Their appeal also failed. 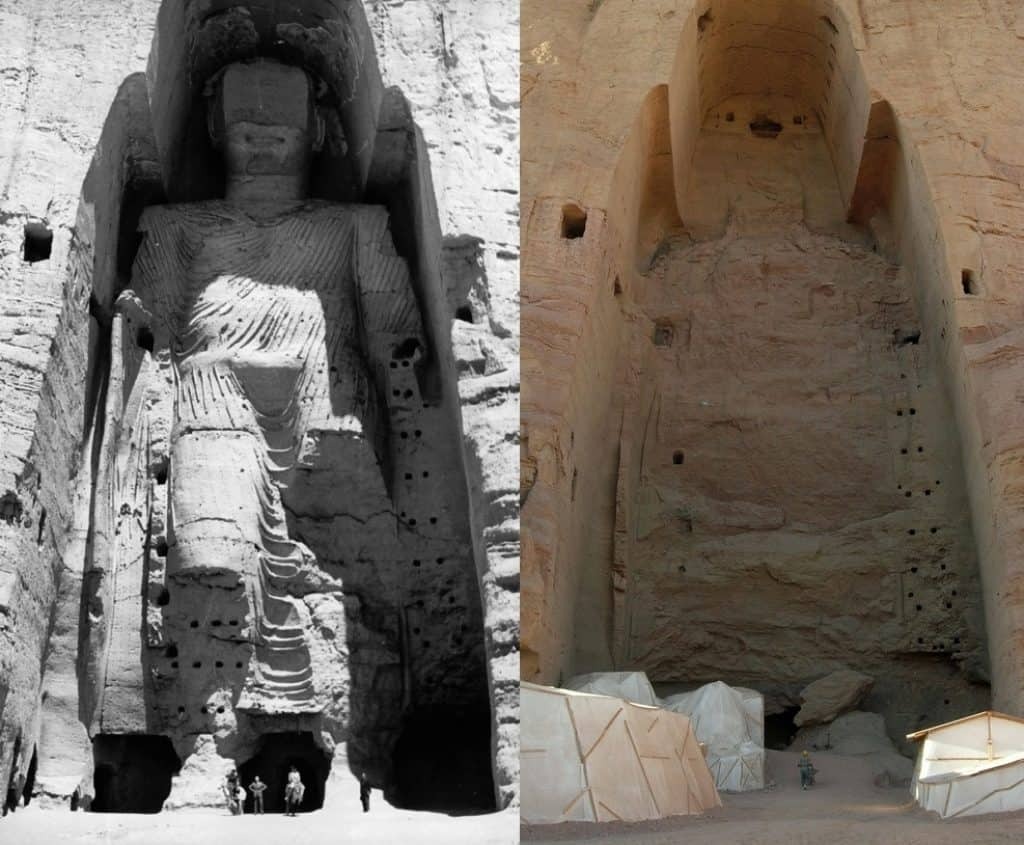 Before and after the destruction of the larger Bamiyan Buddha. Image: UNESCO/A Lezine.

A Loss to All Humanity

Thus, the destruction of one of Afghanistan’s most iconic historic sites began in March 2001. Their narrative of the terrorists was that there is only one god on earth, and these statues did not belong to that god. According to eyewitnesses, the demolition continued for almost a month after the figures survived heavy artillery and anti-tank mines for weeks. Nevertheless, with each day, the pile of rocks beneath the statues grew until, in the end, the Taliban drilled holes into the remains where they place incredible amounts of explosives that finished the job.

The destruction of the statues was an outstanding loss for the world, regardless of religion.

Condemnation for this violent act echoed throughout the Islamic community around the world. Many Muslims felt that such destruction was an act against their people. Therefore, the idea that the Taliban did it for Islam became invalid. After enduring over a thousand years in the Muslim region, the Bamiyan Buddhas would perish at the hands of one group.

The Search for the Third Bamiyan Buddha

According to the travel journals of the Chinese monk named Xuanzang from the 7th century, there was another Buddha of Bamiyan. It was far grander than the other two. According to his story, the lost figure was Buddha Mahaparinirvana and lay about 300 meters across.

Nevertheless, no one has found traces of such a site. Archeologists have been searching for years and continue to do so. This third Bamiyan Buddha would be the largest ever and a true wonder of the ancient and modern world.

There was another Buddha statue found near the original site of the Bamiyan Buddhas, but it was nothing like the one Xuanzang described nearly 1400 years ago. The new reclining Buddha statue was less than 20 meters long and, unfortunately, in terrible condition.

We can only wait and see what the archaeological team of Zemaryali Tarzi will find in the future. Could there be an enormous statue hidden somewhere in the Bamiyan Valley awaiting discovery, or was the depiction of the Chinese monk a mirage? It may have once existed in the past. However, there is no surviving evidence and no textual sources.

Restoration of the Buddhas of Bamiyan

An initiative began in 2011 for the restoration of Afghanistan’s Buddhas. The project is a controversial one, as a number of people believe the crevices should remain empty as a reminder of the Taliban’s terroristic atrocities. Nonetheless, work has begun, and once the process is complete, the government, with the help of UNESCO, plans to implement the site as a tourist attraction to increase revenue.

Meanwhile, a few replicas exist in Poland, China, Sri Lanka, and India. Their visages give viewers a glimpse into the past when, even in the wake of religious upheavals, the local groups treasured the Bamiyan Buddhas.

Where was the Garden of Eden

Vladislav is currently a history student at Sofia University in Bulgaria. His life long passion is traveling and studying history. Vladislav has traveled to dozens of countries while working as a freelance writer to fund his adventures.