In 1974, archaeologists discovered the Terracotta Army buried in Lintong, Shaanxi, China, near the tomb of the first emperor, Qin Shi Huang (259 BCE-210 BCE). The powerful unifier of China intended to take his entire world into his afterlife. Thus, he commissioned an epic mausoleum the size of a city. He included parks, palaces, concubines, entertainers, and everything fit for a king, including his army. As spectacular as the gold and bronze treasures may be, the real crown jewel is the emperor’s 8,000 life-sized clay warriors. Initially, many mysteries surrounded these earthen soldiers, but over the last 40 years, Chinese archaeologists have been uncovering their amazing details.

This mysterious terracotta warrior is the only one with an original green face. Modified photo, source: chinauniquetour.com

The Terracotta Army was discovered near the ancient capital city of Xianyang, about three-quarters of a mile east of Qin Shi Huang’s tomb. On today’s map, this area corresponds to the base of the Lishan Mountains in the Lintong District, just outside the city of Xi’an. For reference, this area is approximately 660 miles southwest of Beijing.

During the last three decades of his life, Qin Shi Huang built his massive mausoleum complex of about 38 square miles (larger than once thought, according to National Geographic). In the center of the complex is a huge man-made pyramid mountain that contains Qin Shi Huang’s undisturbed tomb and bronze sarcophagus deep within.

Scientists believe the whole underground necropolis reflects the emperor’s inner and outer palace and surrounding city as they were in his life. In fact, there are two subterranean walls made of rammed earth that separate the palace grounds from the outer area. It was outside the outer wall to the east of the emperor’s tomb that local farmers were digging down into the earth to create a new irrigation well when they discovered a clay head and torso in 1974. Unaware of the significance of their discovery, the farmers took the pieces home. In the following months, scientists heard about the artifacts and went to work to find the source of the clay fragments. That’s when they found the pits of the Terracotta Army.

Inside the Terracotta Army Pits

Since initial excavations in 1974, archaeologists have found three pits containing more than 8,000 figures. These include an infantry of officers and soldiers, charioteers, cavalry, and roughly 600 horses that line large underground corridors. Evidence indicates that about 160 chariots accompanied the horses, although most of their wooden parts have decomposed. Still, their impressions are visible. Excavators also found about 40,000 thousand various types of real weapons.

The pits are 15-20 feet below the ground, and the corridors vary in size but can be more than 10 feet wide. Solid dirt walls separate each corridor. The floor of the pits consists of many thousands of clay bricks upon which the warriors stand.

Pit 1 discovered in 1974. Behind the standing soldiers lie those that remain broken and buried. Derivative by CEphoto, Uwe Aranas.

Interestingly, the Terracotta Army flanks the east side of Qin Shi Huang’s tomb and faces toward what would have been his enemy territories. Each soldier once held a weapon in hand and, altogether, they collectively display a formidable military formation between the emperor and his adversaries.

Discovery: 1974. The first and largest formation of terracotta warriors is in Pit 1 with more than 6,000 statues. This pit covers approximately 150,000 square feet and contains a number of officers, a few generals, about 45 chariots and horses, archers, crossbowmen, and infantry. Three full rows of archers wearing robes and no armor make up the front line of the army. Behind them are additional robed and armored infantry, horses, and chariots. Only a small portion has been excavated, and toward the back of the pit, there is an area that workers refer to as “the hospital” where they are carefully piecing together the broken figures.

Discovery: 1976. Pit 2 is about 65,000 square feet and holds what is thought to be a military guard with cavalrymen, chariots, infantry, officers, and horses. One Chinese archaeologist, Yuan Zhongyi, described Pit 2 as “the essence of the Terracotta Warriors.” Here, scientists found the highest number of kneeling archers (about 162), plus about 170 standing crossbowmen. Each chariot is accompanied by an expert charioteer along with his two armed soldiers.

A number of outstanding pieces came from Pit 2, including a rare soldier with a green painted face (see photo at top) and a beautiful kneeling archer that the Terracotta Museum now showcases. Additionally, the original paint on the soldiers reveals better preservation in this pit. Altogether, archaeologists estimate that there are about 1,400 statues and 89 battle chariots in Pit 2. Like Pit 1, Pit 2 is still undergoing excavations.

Discovery: 1976. With about 5,500 square feet, Pit 3 appears to be the command center containing high-ranking officers and an elaborate war chariot for the high commander. This chariot was larger than the those in the other pits and would have contained four armored soldiers to protect its riders. Unlike the warriors in the other pits, many of the 68 soldiers in Pit 3 face each other.

Archaeologists found a fourth pit that was empty and apparently unfinished.

As noted, each clay figure once held a weapon, and archaeologists found tens of thousands of them. Experts believe that the weapons were originally brand new and specially crafted for the army. According to researchers Torres, Li, Bevan, Xia, Kun, and Rehren in Making Weapons for the Terracotta Army:

The assemblage excavated so far includes over 40,000 arrowheads, as well as hundreds of crossbow triggers, swords, lances, spears, halberds, hooks, honour weapons (Su) and the ferrules that were fixed at the end of the wooden hafts of the longer weapons. Many of these pieces of military equipment are in such a pristine state of preservation that they would still be lethal today.

A notable discovery took place in 2009 when archaeologists made the third excavation on Pit 1. They unearthed a special type of crossbow that they knew of only from historical records but had never found. So preserved were the details of the weapon that even the bow strings are decipherable. Experts estimate that this crossbow was so powerful it could shoot twice as far as an AK 47. 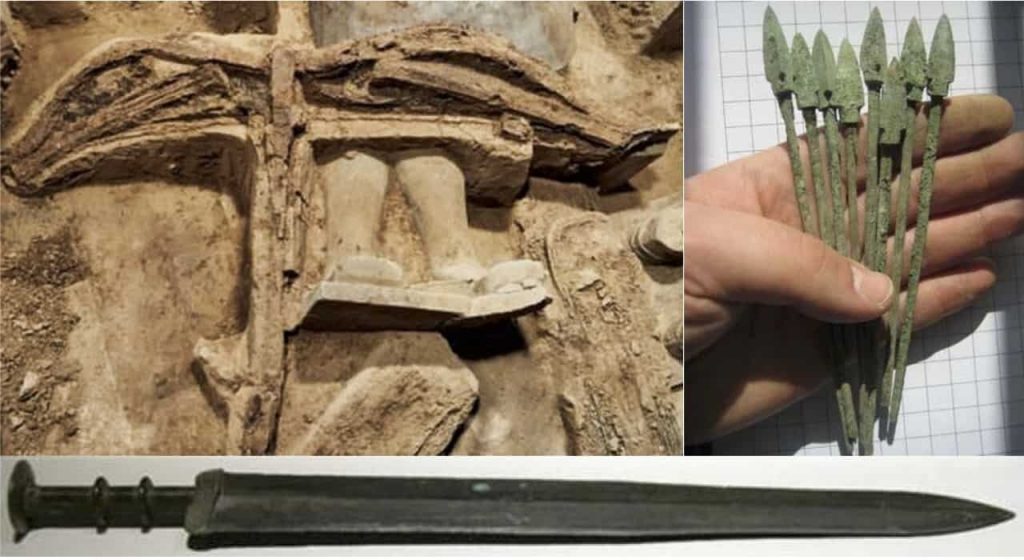 The Qin weapon-makers stamped their names on each weapon, and their incredible metallurgical skills and precision techniques have resulted in swords, spears, and axes that are still sharp today.

Unfortunately, most of the original weapons and many body parts (especially heads) were looted. A great deal of damage occurred (circa 206 BCE) just a few years after the death of Qin Shi Huang when rebels fighting for control of China broke into the pits of the Terracotta Army. They smashed many of the soldiers, looted most of the weapons, and set the pits ablaze. The fires caused the roofs to collapse onto the statues, crushing them. This was both a practical and symbolic maneuver.

Firstly, the rebels needed the weapons for fighting, because the first emperor had confiscated most of them. Secondly, they aimed to destroy the protectors of Qin Shi Huang in his afterlife. Additional looting occurred throughout the years from villagers who found their way into pits and stole souvenirs, such as a number of heads.

Evidence of the fires is still visible in Pits 1 and 2. Some of the soldiers have burnt red areas, and there is visible charring of the wooden roofs that collapsed atop the soldiers. According to China.org, Shen Maosheng, leader of the archaeological team for Pit 1, said, “We have found large quantities of red clay and charcoal along with holes for robbing in the major pit of terra cotta warriors.”

Collapsed roof structures are clearly visible with charring from the fire in circa 206 BCE. CC2.5 Maros.

Reconstruction of the Terracotta Soldiers

When archaeologists found the army, none of the figures were intact. Most of them lay severely cracked and had lost most of their original bright colors. Any paint still remaining on some figures quickly dried and flaked off after excavation. To date, Chinese experts have excavated and painstakingly reconstructed about 2,000 soldiers. The soldiers now stand in battle formation from 2,200 years ago at the Terracotta Army Museum near Xi’an, China.

Nothing like the Terracotta Army had ever been created in China before the time of the first emperor. Each of the warriors is stunningly lifelike; although there are some similarities, no two of the statues are exactly the same. Some experts theorize that the sculptors created each clay warrior to closely resemble the most elite members of the emperor’s real army. In the photos below, all details of each soldier are highly distinctive.

Each terracotta warrior weighs between 100 and 400 pounds and ranges in height between 6 and 6-1/2 feet. Their bodies have different shapes and positions; some soldiers are very thin, while others have more girth. Most of them are standing tall, but some of them are kneeling. Even the arms lie at various angles depending upon the weapon they once held. Ranks are additionally evident in their regalia. Collectively, the clay army exudes strength, confidence, and a readiness to protect and fight for their emperor.

Destruction of the Giant Bamiyan Buddhas in Afghanistan

Two types of terracotta horses accompanied the warriors: those with saddles for cavalrymen and those without saddles for pulling chariots. Bearing magnificent details, the horses weigh about 750 pounds and are exceedingly realistic. Reflecting the real horses of the Qin Dynasty, they stand at more than 5-1/2 feet tall and 6-1/2 feet long. Their features include teeth, hair (also some very fine hairs), chiseled faces, muscular legs and backs, bridles, and saddles on the cavalry horses.

Who Built the Terracotta Warriors?

Evidence indicates that highly skilled Chinese artists of the Qin Dynasty sculpted the funerary army of the first emperor. Archaeologists found the names of each sculptor stamped into the clay and hidden inside each soldier. So far, they have counted the names of 87 different master sculptors. It appears that the stamps were meant to remain unseen and were there only for quality control purposes. If a terracotta soldier did not meet standards, there would have been severe consequences – perhaps even death.

One scholar from Vienna purports that ancient Greek sculptors may have been on site to teach the Chinese how to create the exquisite statues. However, there is absolutely no evidence of this. In fact, the senior archaeologist that works with Emperor Qin Shi Huang’s Mausoleum Site Museum, Li Xiuzhen, said, “I am an archaeologist, and I value evidence. I’ve found no Greek names on the backs of Terracotta Warriors, which supports my idea that there was no Greek artisan training the local sculptors.” Li adds, “I think the Terracotta Warriors may be inspired by Western culture but were uniquely made by the Chinese.”

Archaeologists think they have found the craftsmen buried in 45 tombs about three miles from the mausoleum.

The true purpose of the Terracotta Army was a practical one: to protect the emperor from his enemies in the next life. His grand vision manifested in a legacy of stunning artistry and beauty, and the world has never seen anything like it since. In 1987, UNESCO adopted the Qin Shi Huang Mausoleum and Terracotta Army as a World Heritage Site to aid in the preservation of these Chinese treasures that will forever be a reminder of the First Emperor of China and his great ambition to take his world into the afterlife.

You may also like:
The Secret Tomb of Genghis Khan