King Kamehameha, the ruler of the Kingdom of Hawai’i, died in May of 1819, however, nobody has found his burial site.

The Hidden Bones of King Kamehameha

Kamehameha’s bones were hidden in the strictest Hawaiian tradition of hūnākele, in which a person is buried in total secret and the location is never to be disclosed. The Hawaiians believed this was necessary to protect his mana, which means power. 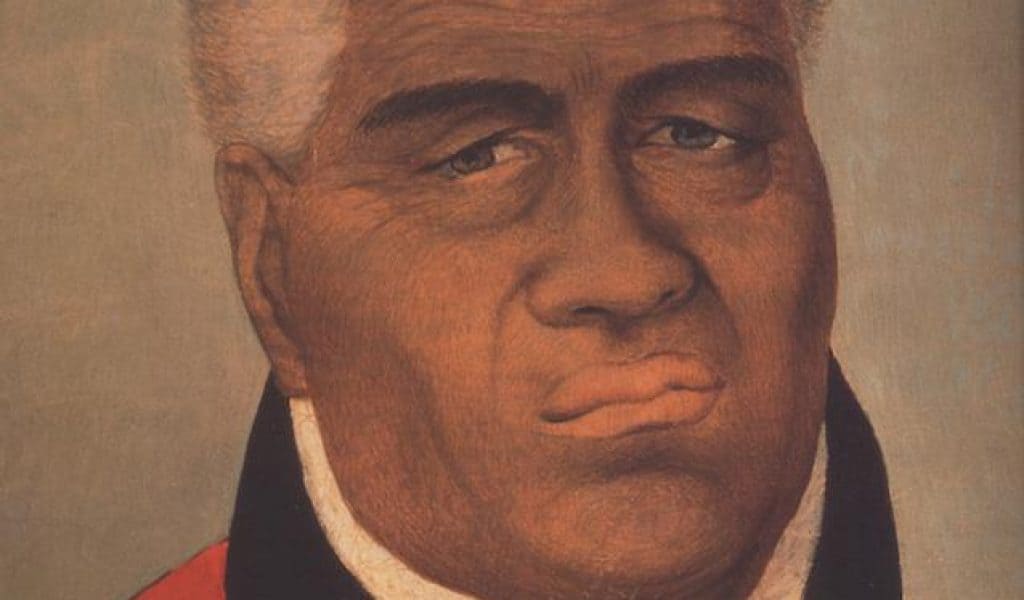 What is Mana and Why Was it Protected?

Mana is a powerful and pervasive energy of a spiritual nature. It was a cornerstone of the Hawaiian religion, which enveloped the entire life of the Hawaiian. As such, they prayed and worshipped their many gods during everyday activities. Because the Hawaiians were animistic, believing that spirits could dwell even in non-living things, mana could also exist in objects, in addition to people and places. A person could acquire mana or they could lose it.

There were two main paths a person could utilize to increase mana. The first path was through acts of hostility, while the second path was through engaging in sexual relationships with those of higher status. Success in battles, killing of one’s opponents, and the ritualistic sacrifice of defeated enemies all contributed to a person’s mana. Additionally, mana could be maintained and gained when two royal members of the same family would engage in a sexual relationship and have a child together. Especially the highest chiefs guarded their mana and ensured the mana of their offspring by mating with a royal sibling. Because the great mana of the royalty was highly coveted, they had to go to great lengths to protect it. (Wikipedia, “Mana,” September 5, 2013) 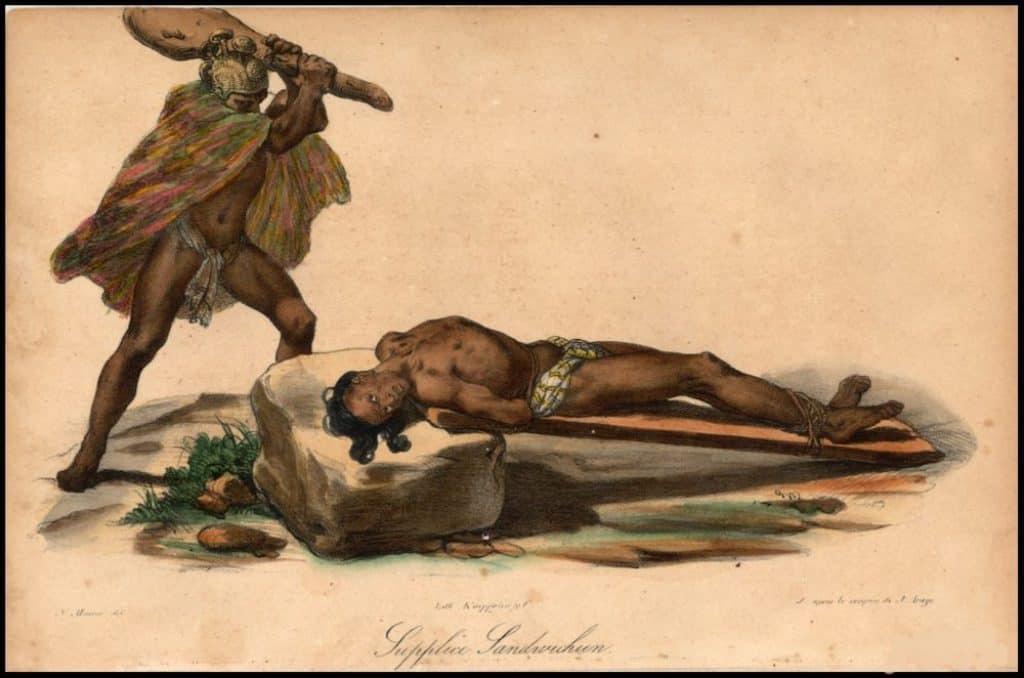 The Legend of the Royal Birth

King Kamehameha was one such person of royalty who was believed to have acquired an immense amount of mana for a number of reasons.

Legend tells that prophecies were made about a divine child. He would be born at a time of storms and strange lights in the sky. These were “activities thought by Hawaiians to herald the birth of a great chief” (“Pu`ukoholā Heiau,” National Park Service). Why did they believe this? According to Robert Blust, a prominent linguist at the University of Hawaii, Manoa, the history of the word “mana” relates to forces of nature, such as storms and wind and thunder. Indeed, Halley’s comet was observable from Hawaii in 1758, around the time of Kamehameha’s birth (the exact date of his birth is unclear). If Kamehameha was truly born during such a period, the Hawaiian people would have ascribed an abundance of mana to the newborn.

According to the National Park Service:

Because of prognostications at his birth and threats from warring clans, Kamehameha was taken away and hidden immediately after his birth. He spent his early years secluded in Waipio, returning to Kailua at the age of five. He lived there with his parents until his father’s death, then continued to receive special training from King Kalani’opu’u, his uncle.

The training from King Kalani’opu’u turned Kamehameha into a strong and fierce warrior. His success at numerous battles gained him more and more mana. Some people said Kamehameha “moved in an aura of violence.” He also fought in the famous Battle at Kealakekua Bay, where the Hawaiians killed Captain Cook.

The Hawaii Clipper Disappearance of 1938

When his uncle, Kalaniʻōpuʻu, died, “he bequeath(ed) his war god, Kuka`ilimoku, to his nephew Kamehameha” (N.A. The Beginning (www.hawaiihistory.org). Thus, Kalaniʻōpuʻu gave Kamehameha a powerful religious position as the possessor and guardian of the Hawaiian war god, Ku. As a result, his mana increased tremendously. 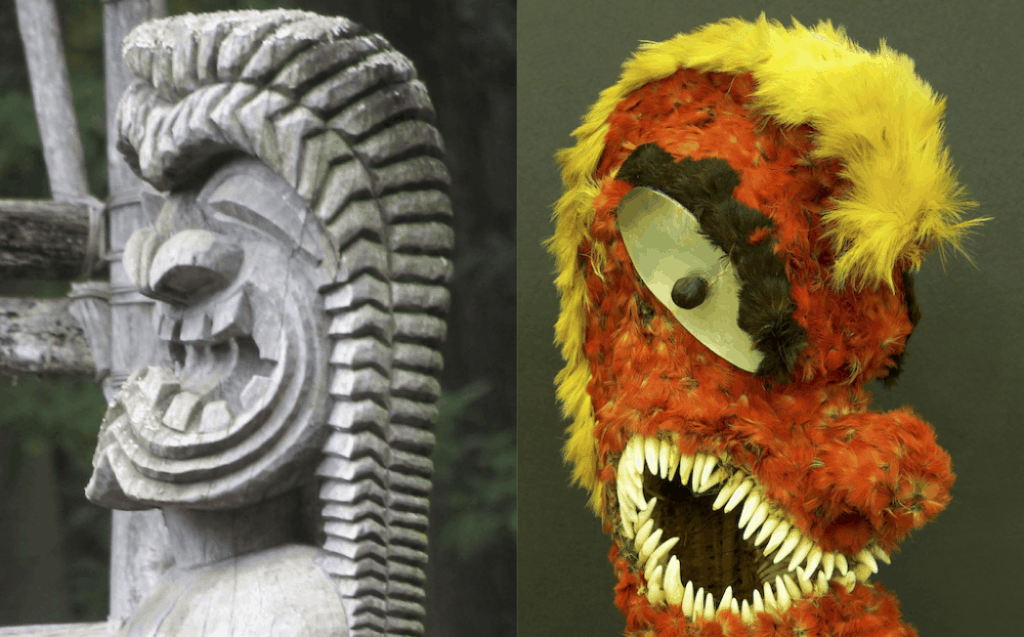 King Kamehameha took full advantage of his new position by first overthrowing the other rulers of the island of Hawaii. Later, he fought in many fierce battles to eventually conquer all of the islands. This gained him the title of Kamehameha the Great, and he became ruler of The Kingdom of Hawaii. Once again, his success in battle heightened his mana.

Last Days of the King

Kamehameha outlived many of his own children to reach 61 years of age. He had spent 9 years on O’ahu during the end of the unification process. Then he took time traveling from island to island to enjoy the fruits of his labor, and to be with his people. Finally, he settled down in Kailua Kona, on the island of Hawaii, where he spent his last 7 years until his death. However, because he was a great strategist by nature, he thoroughly planned for his proper and safe burial. 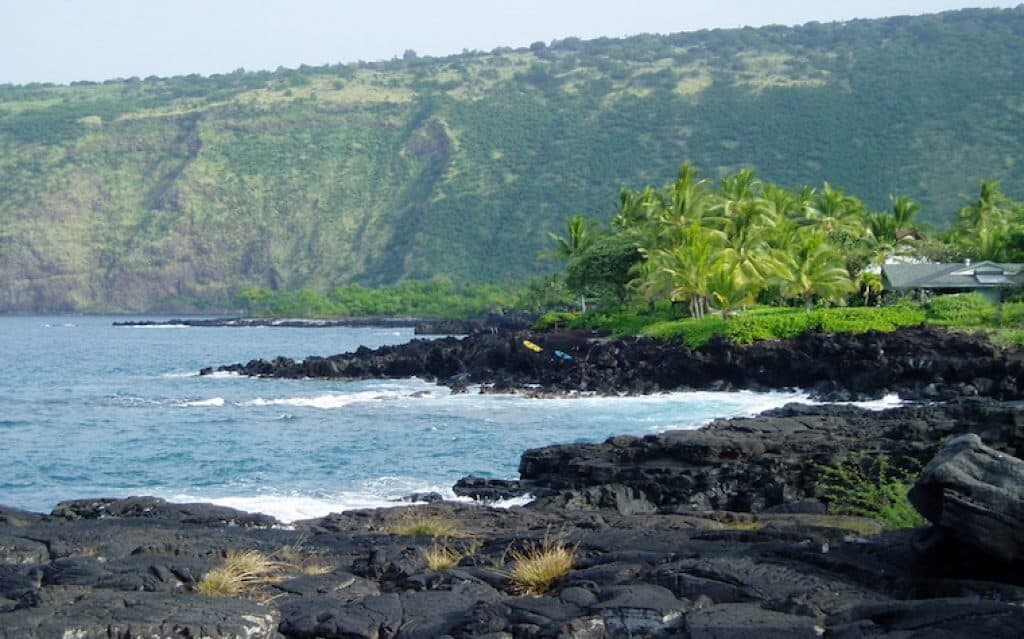 Is King Kamehameha buried in a cave on the coast of Kona, Hawaii? Image: Travis Thurston at English Wikipedia, CC BY-SA 3.0.

William Kaihe’ekai Mai’oho, now deceased, was the curator of the Royal Mausoleum of Hawaiʻi. He was a descendant of Hoʻolulu and Hoapili (the undertakers of Kamehameha’s remains). According to Mai’oho, Ho’olulu, Hoapili, and Kamehameha’s favorite wife, Keōpūolani, worked together after the King died. They threw his flesh far out to sea and made a special woven basket to contain his sacred bones. The basket had a face with eyes that they made of mother of pearl. They made the mouth from the King’s real teeth.

Together, they took the bones on a dark, moonless night in secret to a cave along the coast. They could only reach this location by canoe at low tide. Because the bones contained Kamehameha’s mana, the curators worked to safeguard them from someone who might want to steal the mana. Additionally, they needed to protect the burial site from desecration. (Star Bulletin, “Mai’ohos feel drawn to royal burial site,” March 5, 2006).

Did King Kalākaua Find the Bones?

Today, there is only speculation about where King Kamehameha may be buried. According to Wikipedia, “Kamehameha I,” King Kalākaua searched for the remains of King Kamehameha and based on information from his source found two sets of bones. He took the bones to O’ahu in 1888, and “…then, years later, Dr. Louis Sullivan of the American Museum of Natural History, examined both sets of bones, and concluded that neither set was of Kamehameha.” Some people believe that King Kalākaua actually found the bones, but kept the location secret.

The Power of Accomplishment

King Kamehameha was alive during a pivotal time in Hawai’i’s history. Europeans had discovered the islands and had brought with them their technology and their guns. Hence, it was later with the help of those guns that Kamehameha mustered the great fighting power to help him unite the islands. People knew Kamehameha as a smart strategist and a strong leader. He worked hard to preserve the Hawaiian religion and culture. Additionally, his success at war led him to become a highly respected and feared man.

However, for the Hawaiians, it was all about mana: the mana that was given to Kamehameha at the time of his birth, the mana that he had amassed throughout his life, and the mana that would create one political system and unification for the islands. It was his divine power that built up the man and the King. And, henceforth, he became “Kamehameha the Great.”

What’s in the Buried Treasure?

What would happen if someone ever discovered Kamehameha’s final resting place? Would all of his immense mana transfer to the finder? Or would his bones simply bear the physical signs and strain of the many years of battles without passing on the legendary promise of a lifetime of power?