Why We Love Looking at Early Photographs

There is something deeply fascinating about viewing the first photograph of a significant event. Unlike looking at a painting or a book, looking at a first image or earliest photograph draws the viewer directly to that particular place and time. It was circa 1826 when Joseph Nicéphore Niépce took the first photo  – that is almost 200 years ago. The power of historical photographs leaves a permanent record of how things looked at that specific point in time. Now, almost two centuries later, these same images continue to convey a wealth of information and emotion. You will find some of these amazing first photos and imagery below.

On the left is the View from the Window at Le Gras, the earliest photo still known to exist (taken circa 1826).  An enhanced version of the image is on the right.

Historians often cite View from the Window at Le Gras as the first photograph ever taken. In actuality, it is just the oldest surviving camera photo we have on record. Joseph Nicéphore Niépce snapped the shot in 1826 or 1827 in Saint-Loup-de-Varennes, France, out of a window and pointed towards several buildings. Niépce used a pewter plate coated with an asphalt derivative to capture the image from his camera obscura. Initially thought to have taken eight hours of exposure to take this photo, some now estimate that it took several days.

First Photo of a Person The first photograph of a person occurred in 1838. We don’t know his name, but we know what he was doing.

In 1838, Louis Daguerre took this photograph of the Boulevard du Temple in Paris, France. The processing of the image required up to ten minutes of exposure. Because of the long exposure time needed, anything moving did not make it in the picture. It was 180 years later when someone taking a closer look at this photo understood the true significance of this image. On the bottom left portion of the photo is a man standing on the sidewalk with someone shining his shoes. Although this unidentified man would never come to know it, he has the distinction of being the first person to be photographed. 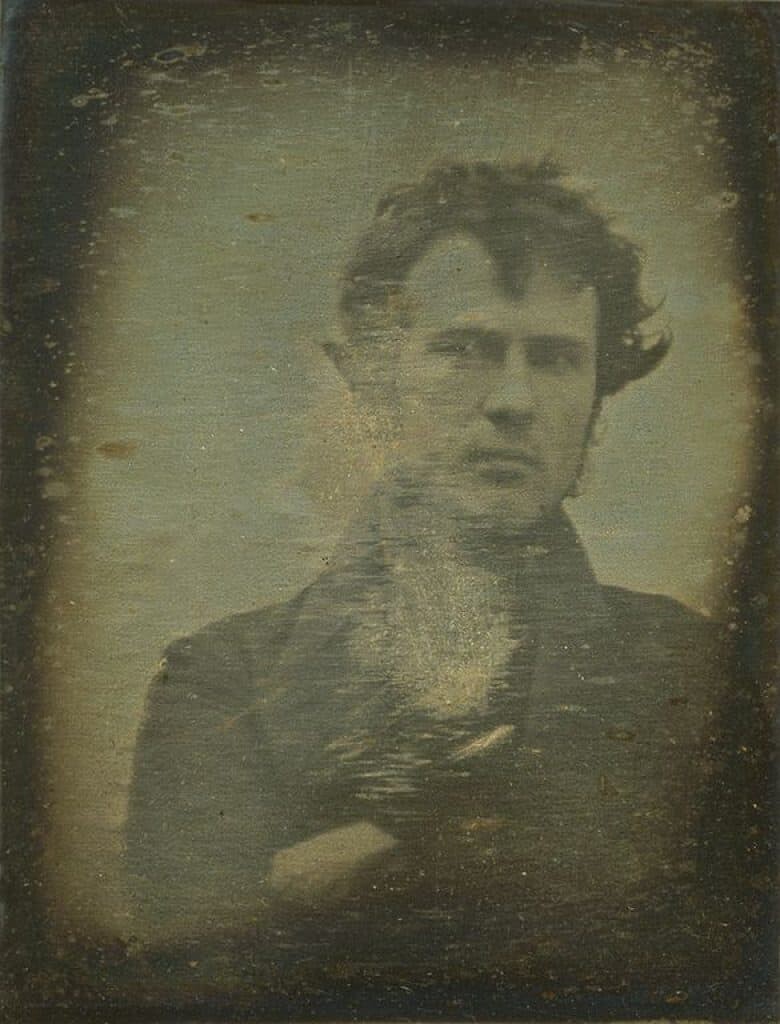 As a youth attending a private school in Philadelphia, Pennsylvania, Robert Cornelius was always fond of chemistry. His interest in this subject led him to work on the daguerreotype, an early photographic process using silver plated sheets and mercury fumes. Using an improved daguerreotype, Robert Cornelius is credited for taking the first “Selfie” in photographic history while standing in front of his family’s store on Chestnut Street, Philadelphia, in October 1839. To achieve this image, he had to stand still for 10 to 15 minutes.

First Photograph of a Woman 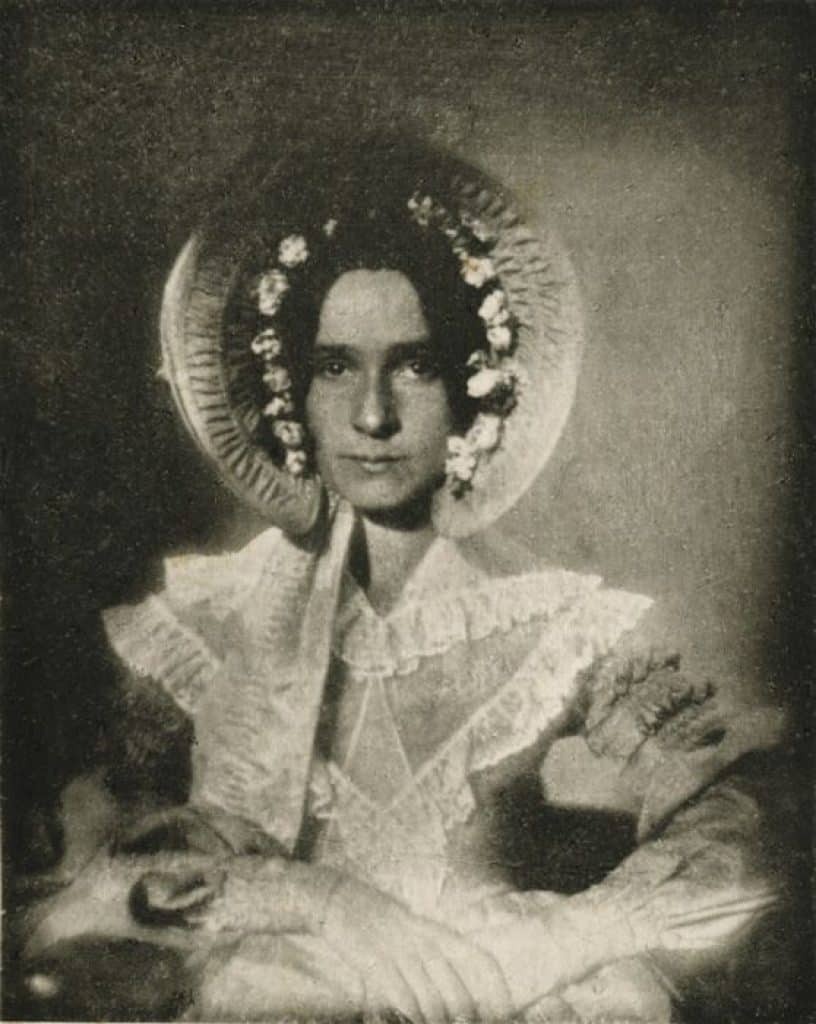 The first photograph of a woman is this 1839 portrait of Dorothy Catherine Draper.

Not long after the invention of the daguerreotype, Dr. John W. Draper made additional improvements on the device’s photographic process. Draper saw its usefulness for portraits and made history by taking the first photograph of a woman.  The woman was his sister, Dorothy Catherine Draper, and he took this image in 1839 or 1840 in Draper’s studio at New York University. Without blinking, Dorothy sat motionless for 65 seconds to take this historic photo. Conrad Heyer has the earliest birthdate of anyone ever photographed.

Conrad Heyer, the son of German immigrants, was born in 1749 in what is now Waldoboro, Maine. Although Heyer is famous for celebrating the earliest birthdate of anyone ever photographed, he lived a pretty interesting life. Conrad Heyer served in the Continental Army under the command of General George Washington. In fact, he was with General Washington during the crossing of the Delaware River before the Battle of Trenton in 1776. After the war, Heyer lived the remainder of his long life as a farmer back in Waldoboro. He died with full military honors in 1856. 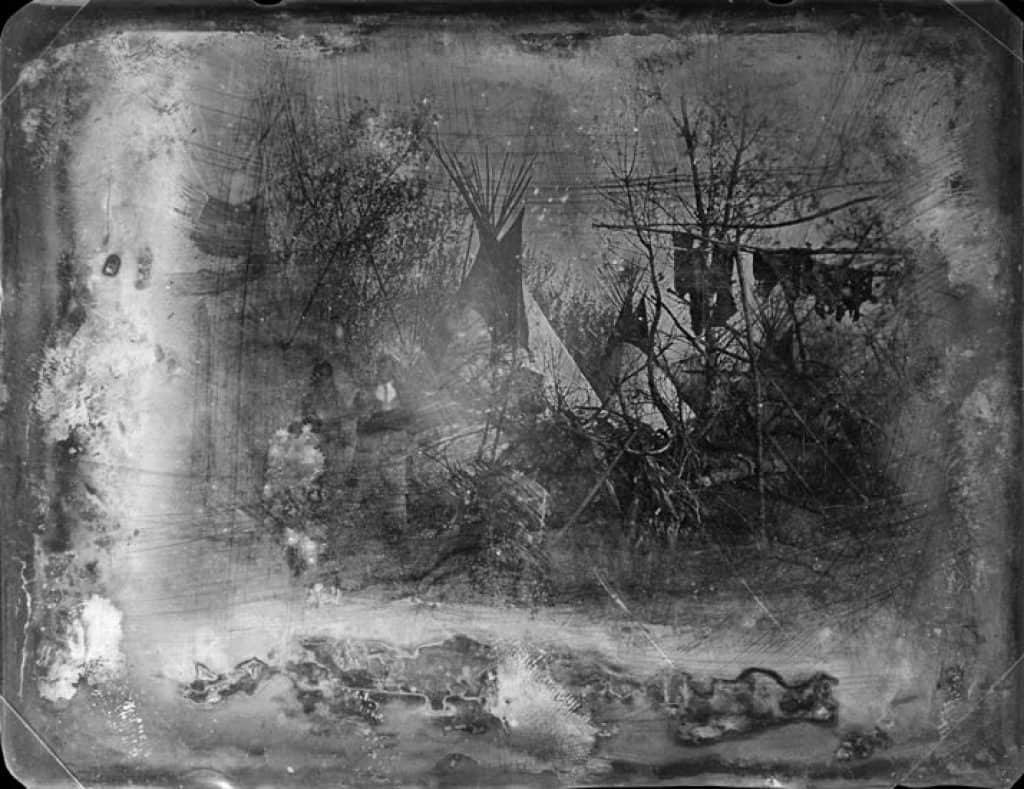 In 1853, Solomon Nunes Carvalho used a daguerreotype to take this picture of a Cheyenne camp at Big Timbers, in what is now Colorado. Although difficult to spot, two Cheyenne are standing to the left of center.  This first photograph of a Native American camp can be retrieved from the U.S. Library of Congress. 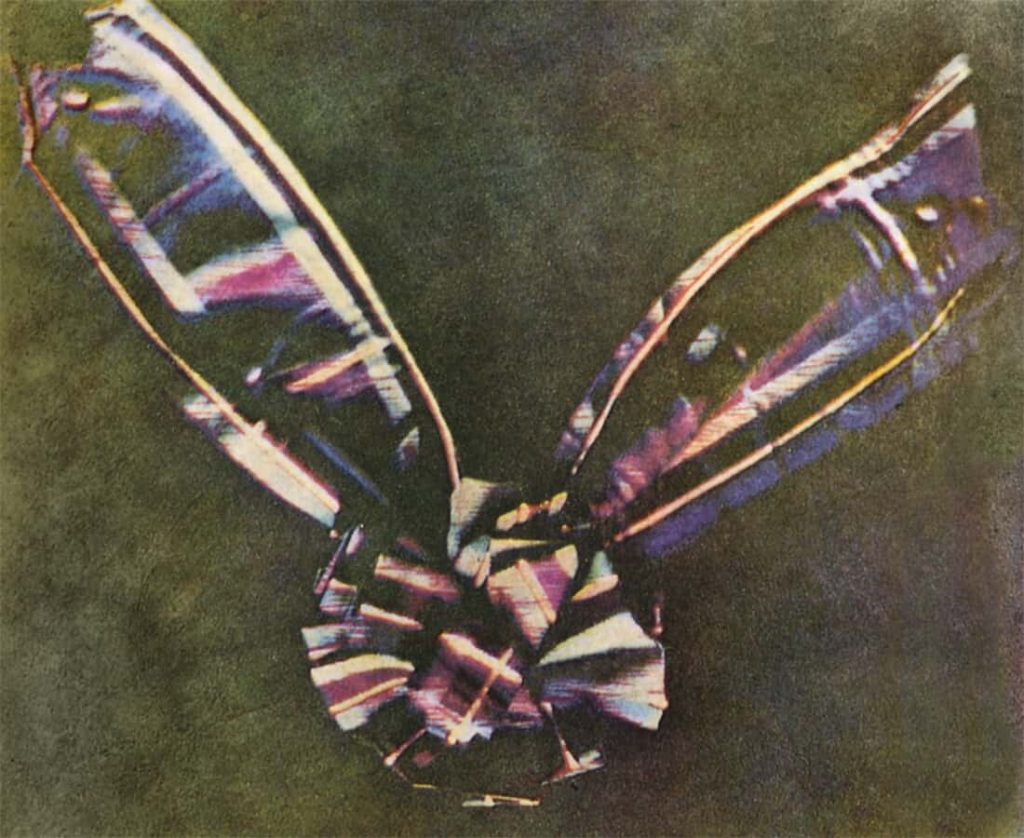 This is the first color photograph, 1861. The process involved the use of blue, red, and green filters.

In 1855,  James Clerk Maxwell suggested a groundbreaking theory that the mixing of three lights sources could recreate any conceivable color. In 1861, at the Royal Institution of London, photographer Thomas Sutton was directed by Maxwell to take three separate black and white photographs of a colorful tartan ribbon using blue, red, and green filters. Projected onto a single screen using similar filters, the three photographs merged to create one. The somewhat successful result proved that color photography is possible.

It’s difficult to discuss first photographs without mentioning the introduction of video. In 1888, French inventor Louis Le Prince filmed the two-second movie clip called The Roundhay Garden Scene in Leeds, England. In the film, we see Adolphe Le Prince, the son of Louis, walking in a large circle. Annie Hartley is wearing a light-colored dress and turning around. The film was recorded in the garden of Sarah and Joseph Whitley, the older couple who are also visible in the film. Sarah appears to be walking backward in the clip. Sarah Whitley passed away ten days after filming this scene. This Roundhay Garden Scene footage is the oldest surviving film believed to exist.

First Image of a Tornado A.A. Adams took the first photo of a tornado in 1884. This famous picture now resides at the Library & Archives collection of the Kansas Historical Society.

The first photo of a tornado was taken by A.A. Adams on April 26, 1884, in Garnett, Kansas. The funnel appeared at around 5:30 pm and traveled in a northeasterly direction for about 30 minutes. This gave Adams plenty of time to set up his camera and take this historic photograph. Adams snapped the image while standing next to the United Presbyterian Church in Garnett when the tornado was about 14 miles away.  It wouldn’t be surprising if this photo was on every storm chaser’s wall. 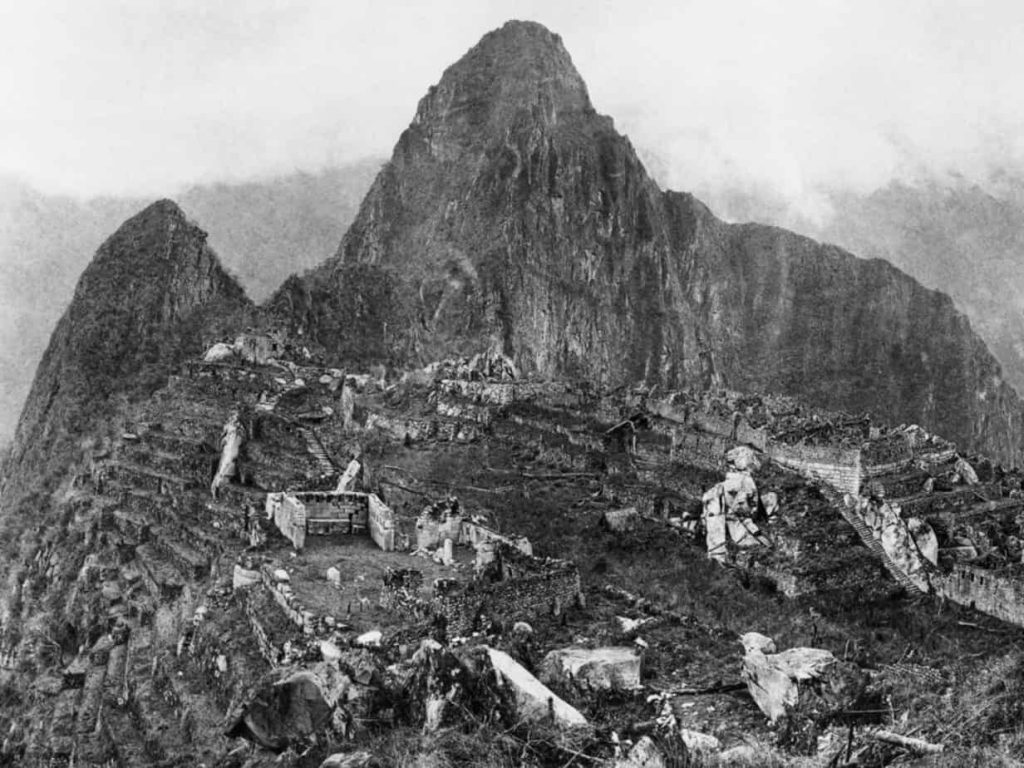 Hiram Bingham III took the earliest photograph of Machu Picchu in 1912. Already known to exist by Peruvian locals, Bingham introduced this Inca city to the world after visiting it in 1911. The photograph above was taken after the area was cleared of foliage and only half of Machu Picchu is visible in the picture. With over 150 buildings and 3,000 stairs, it is hard for one to believe that anyone could build such a splendid city without the wheel and modern tools.

First Color Picture of Members of The Beatles 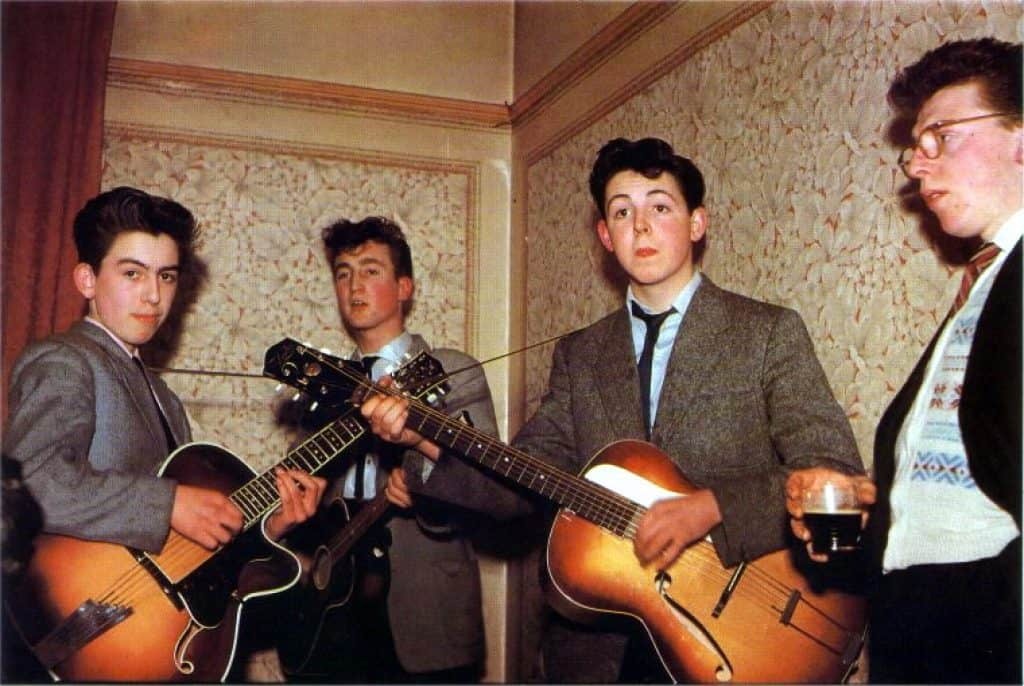 The Beatles are arguably the most popular and commercially successful band in music history. But before they became members of the famous Fab Four, John Lennon, Paul McCartney, and George Harrison were known as The Quarrymen. This photo from March 8, 1958, is the first color photograph of The Quarrymen. In the photo, the band is entertaining guests at the wedding of Ian Harris and Jacqueline Gavin. At the far right of the photograph is their friend, Dennis Littler, enjoying a glass of Guinness.

First Photograph Uploaded on the Internet 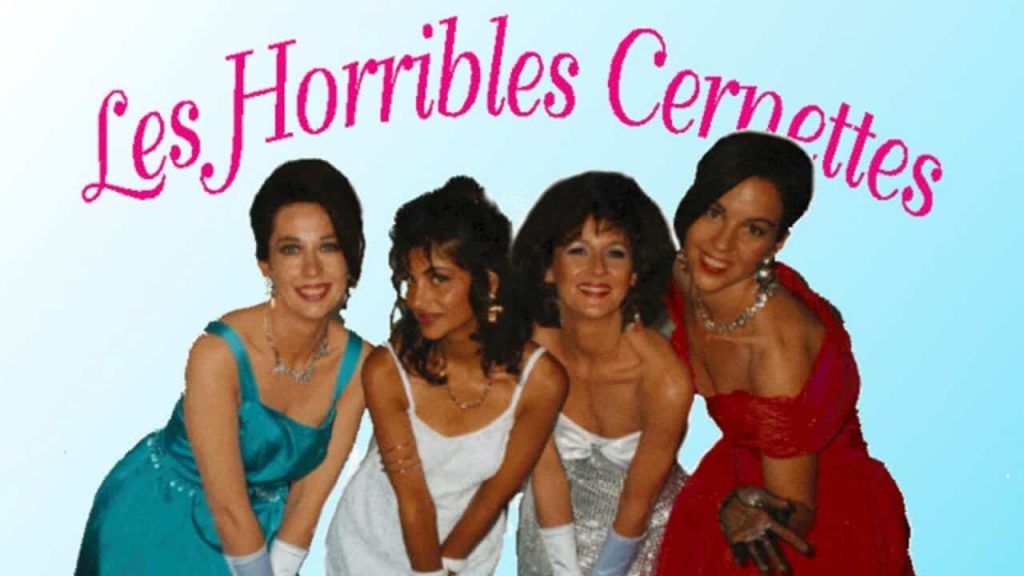 The first photo uploaded on to the Internet was of the Les Horribles Cernettes, a female parody pop group.

Silvano de Gennaro, a computer science department analyst at CERN, helped create the all-female doo-wop parody pop group named Les Horribles Cernettes. On July 18, 1992, Gennaro took this picture of the band and explains how it became the first photograph uploaded on the internet:

Back in 1992, after their show at the CERN Hardronic Festival, my colleague Tim Berners-Lee asked me for a few scanned photos of “the CERN girls” to publish them on some sort of information system he had just invented, called the “World Wide Web”. I had only a vague idea of what that was, but I scanned some photos on my Mac and FTPed them to Tim’s now famous “info.cern.ch”. How was I to know that I was passing a historical milestone, as the one above was the first picture of a band ever to be clicked on in a web browser! 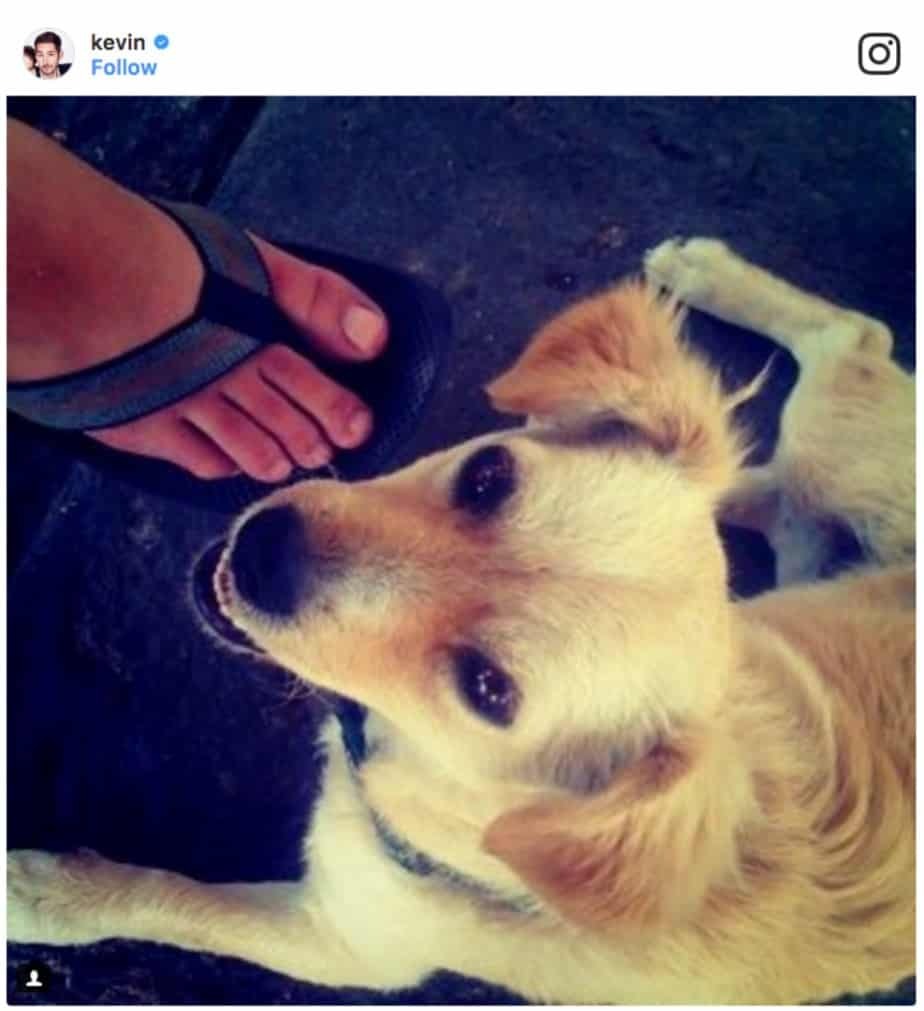 The first Instagram photo featured an unidentified dog and foot.

On July 16, 2010, Instagram CEO and co-founder Kevin Systrom made history by uploading the first photograph on Instagram. The image is that of a yellow-haired dog and a foot in slippers – you know, the typical Instagram photo. The photo has gathered over 84,000 Likes. Systrom is the first to tell you how surprised he is that this is such an iconic photo. When looking back on that historic day, Systrom recalled how he was experimenting with his Instagram app by using various photo filters. Systrom added that if he had known how famous it would be, he would have probably put more thought into it. Systrom can start by telling us whose foot that belongs to and the name of the cute dog.

Fixing the New Year: How We Left the...