The video below contains the original audio recording of Gloomy Sunday. This song has allegedly been linked to multiple suicides.

Music can have a profound impact on the human psyche and emotions, but can one song lead to more than a hundred suicide deaths?

Gloomy Sunday, written in 1932 by the Hungarian pianist and composer Rezső Seress, was nicknamed the Hungarian Suicide Song, perhaps for good reason. It is blamed for being connected to more suicides than any other song in history.

In the original lyrics of Gloomy Sunday, written by lyricist and poet László Jávor, the singer is asking his dead lover to join him at his own planned funeral. The song seems to allude to suicide, as he longs to be with his love in the afterlife, and appears to be taking matters into his own hands to get there.

The song was released in English in 1936 with revised lyrics by Ray M. Lewis. This version clearly refers to suicide:

Gloomy is Sunday, with shadows I spend it all
My heart and I have decided to end it all
Soon there’ll be candles and prayers that are sad I know
Let them not weep let them know that I’m glad to go

The story surrounding Gloomy Sunday has become somewhat of a legend, embellished to a certain extent. Many of the details are not verifiable. Nonetheless, the song and story have been widely publicized in popular newspapers and magazines for its supposed eerie connection with many suicides.

At least eighteen suicide deaths in Hungary are reported to have had close links with Gloomy Sunday. In the Time Magazine article, “Music: Suicide Song,” published March 30, 1936, the author (unnamed) described a number of suicides. A Hungarian shoemaker by the name of Joseph Keller left a note at the scene of his suicide quoting some of the Gloomy Sunday lyrics. Several bodies were found in the Danube with their hands clutching the song’s sheet music. Two people shot themselves while hearing a band play the song, and others had been found to have ended their own lives while listening to it. The song was banned in Hungary.

However, the reports are not isolated to Hungary. “In the 1930s, both Time and the New York Times reported on suicides and attempted suicides in the US connected to ‘Gloomy Sunday.’ The song was banned on the BBC until 2002, and according to some reports, certain outlets in the US refused to play the song, fearing it was somehow responsible for these suicides.” (Lauren Davis, “Could This Gloomy Song Really Inspire a Person to Commit Suicide?” iO9). The legend refers to more than a hundred suicides resulting from the Gloomy Sunday lure to the “other side.”

Many other stories about Gloomy Sunday suicides can be found strewn across the Internet. One tells of a girl in Vienna who drowned herself while clinging to the sheet music of the song. Another tale describes a woman in London who listened to the song repetitively and overdosed herself on drugs.

A Climate for Suicide

The Great Depression had begun and suicide rates were skyrocketing in the U.S. and Hungary. Additionally, antisemitism was taking hold across Europe. He didn’t know it when he composed Gloomy Sunday, but Rezső Seress would later be interned at a Nazi labor camp in Ukraine. He survived the camp, but his mother did not. Prior to becoming a musician, Seress had lost his career as a circus performer through injury. He was struggling to make ends meet. (“Rezső Seress.” Wikipedia. August 2, 2013.)

This set the perfect (gloomy) tone for Seress to compose Gloomy Sunday. And he did so by putting his heart and soul, his sadness, and his disappointment into the composition. Seress composed the song in the sad key of C minor, and the music alone was said to be enough to make a person extremely depressed or suicidal. Then came the wretched lyrics on top of the music.

As the story goes, László Jávor had recently broken up with his fiancée, and his heartbreak served as the inspiration for the mournful lyrics to Gloomy Sunday.

Chris Benoit – The Murder Suicide of a Champion Wrestler

Seress eventually succumbed to his own depression and jumped from his apartment building in Budapest. He killed himself just after his 69th birthday. (“Rezső Seress.” Wikipedia. August 26, 2013.)

However, he did leave us with his thoughts:

I stand in the midst of this deadly success as an accused man. This fatal fame hurts me. I cried all of the disappointments of my heart into this song, and it seems that others with feelings like mine have found their own hurt in it. 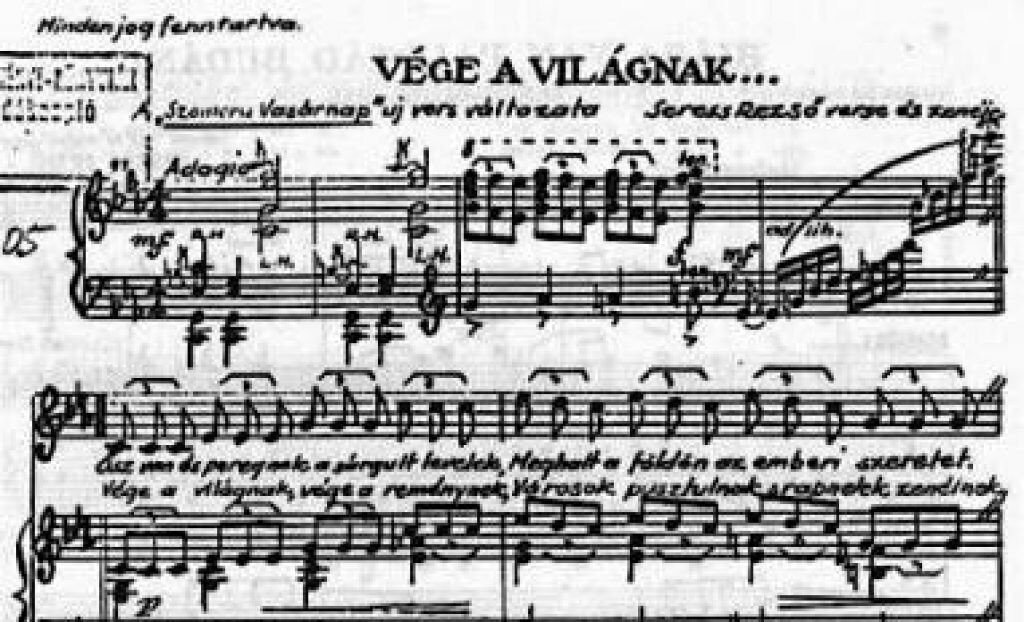 A lot of sad songs have been written. Other songs were not sad, but that may have been about suicide have been written. Many are blamed for having actually caused suicides, however, most of those were isolated incidents. Why is Gloomy Sundayarguably the most suicide-provoking song in history?

Is it because two men, each suffering from his own profound problems, conveyed their personal despair to vulnerable listeners through Gloomy Sunday? If it were not for this song would these depressed individuals have taken their own lives, or did the song drive them over the edge?

Could it be that Gloomy Sunday was created with the perfect combination of elements for one to welcome suicide? After all, in the despair of loss through a loved one’s death perhaps the listener finds acknowledgment and consolation. In the ideas of suicide and reunion with a loved one on the “other side,” a person finds comfort and hope. Merge these elements with a dreary economic and political environment, and perhaps you have the perfect cocktail for mass suicide. It’s almost too depressing to think about.

“Sweet is true love that is given in vain, and sweet is death that takes away pain.” – Alfred Lord Tennyson.