During the brief life (1911 – 1938) of Blues musician Robert Johnson, he left a legacy of music that would outlive him and would grow over time. Notables such as Eric Clapton and Keith Richards have proclaimed him one of the finest Blues musicians that ever lived. 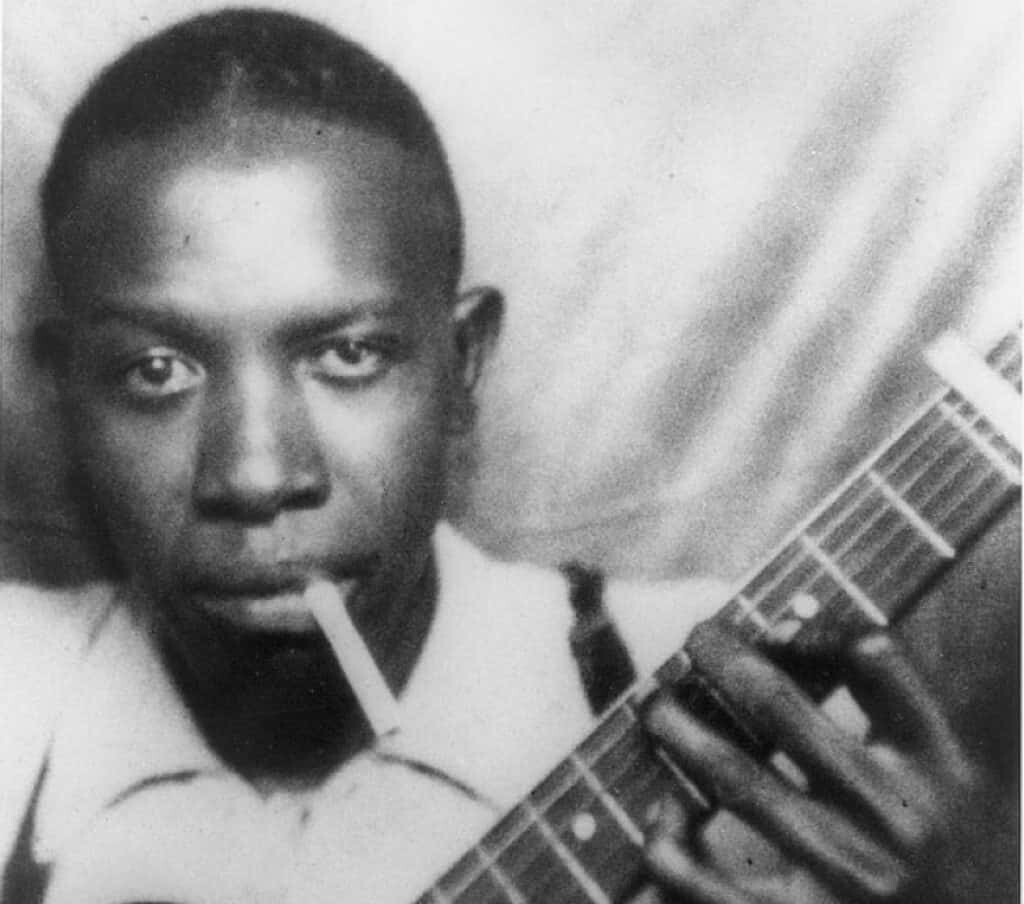 We still have a handful of recordings that show his guitar-playing talent which has rarely, if ever, been matched.

But there is little known about Johnson’s life, as nobody predicted that he would become so revered. His life consisted of fine music and three enduring mysteries.

He was born in Hazlehurst, Mississippi, in May of 1911. He was the tenth child born to his parents, and soon after birth, there began a pattern of moving to different towns throughout the South which would last his whole life.

He appears to have been interested in music from an early age, and it is known that he had skill playing the harmonica as a child. What he didn’t have, despite his best efforts, was any talent for playing the guitar.

At one point during his young adult years, he left his temporary home in Robinsonville, Mississippi, and wandered around the local area for several months. When he returned, he possessed, it was believed, guitar-playing skills far beyond those he could have learned in the short amount of time he had been gone.

And that was the first mystery. Rumors spread that Robert Johnson and the Devil made a pact so he could obtain guitar-playing talent. One version said that Johnson met the Devil at a crossroads outside of town where the Devil tuned a guitar and gave it to Johnson to play. And play he did. Listeners were stunned by Johnson’s sudden talents. Johnson only fueled the rumors by writing a song titled “Me And The Devil.”

His talent, natural or otherwise, did not lead to fame and fortune. Although he would record a handful of records, he made little money from the venture and spent most of his time as a traveling Blues guitarist, playing his own compositions on street corners and outside restaurants.

In August of 1938, Johnson found himself playing near Greenwood, Mississippi. A gig at a dance on the 13th leads to the second mystery attached to Johnson’s life. During the evening Johnson was given a bottle of whiskey from which he eagerly drank. The liquor turned out to have been poisoned, but it is a mystery as to the poisoner’s identity: the jealous husband of a woman Johnson was involved with? The woman herself? Or a different woman who was infuriated at Johnson’s giving attention to other women?

Johnson reportedly suffered for three days from the poisoned alcohol before dying on the 16th. He was 27 years old. His death certificate states that no doctor was present to do an examination, which deepens the mystery, as there was no expert to state if Johnson had, indeed, been poisoned. Other theories said Johnson wasn’t poisoned at all, and would propose other causes, such as syphilis.

Related: The 27 Club: Musicians Who Died at Age 27

Regardless of the cause, Johnson was laid to rest.

His resting place is the third mystery of Johnson’s tale.

It is not known exactly where Johnson was buried. There was no tombstone erected. After his death, he slipped into anonymity until an anthology of his records was issued in 1961. Multiple candidates now claim to hold Johnson’s remains.

Mount Zion Missionary Baptist Church near Morgan City, Mississippi, believes Johnson was buried in an unmarked grave in their cemetery. Not knowing the exact location of Johnson’s burial site, the church erected a monument in Johnson’s honor in a prominent location in 1990.

Also in 1990, Payne Chapel near Quito, Mississippi, established a tombstone proclaiming themselves to be the true location of Johnson’s remains.

And finally, a marker at the cemetery of Little Zion Church near Greenwood, Mississippi, states it is the authentic resting place for this musical genius.

Did Johnson sell his soul in order to become an unrivaled Blues musician? How exactly did he die and by whose hand? Where was he laid to rest?

These questions will persist to intrigue researchers, but nothing can take away the strong legacy this man made to the realm of 20th-century music.