Bob Crane was a beloved television actor whose real-life had a seedy side and whose death baffled his friends, fans, and the police. Crane played the title role of Colonel Hogan in the ’60s sitcom, Hogan’s Heroes. He was one of the stars of the show from 1965 until 1971 when the series was canceled. On 29 June 1978 while on tour with a play, he was murdered in Scottsdale, Arizona. To this day, the mystery of who killed Bob Crane is unsolved. 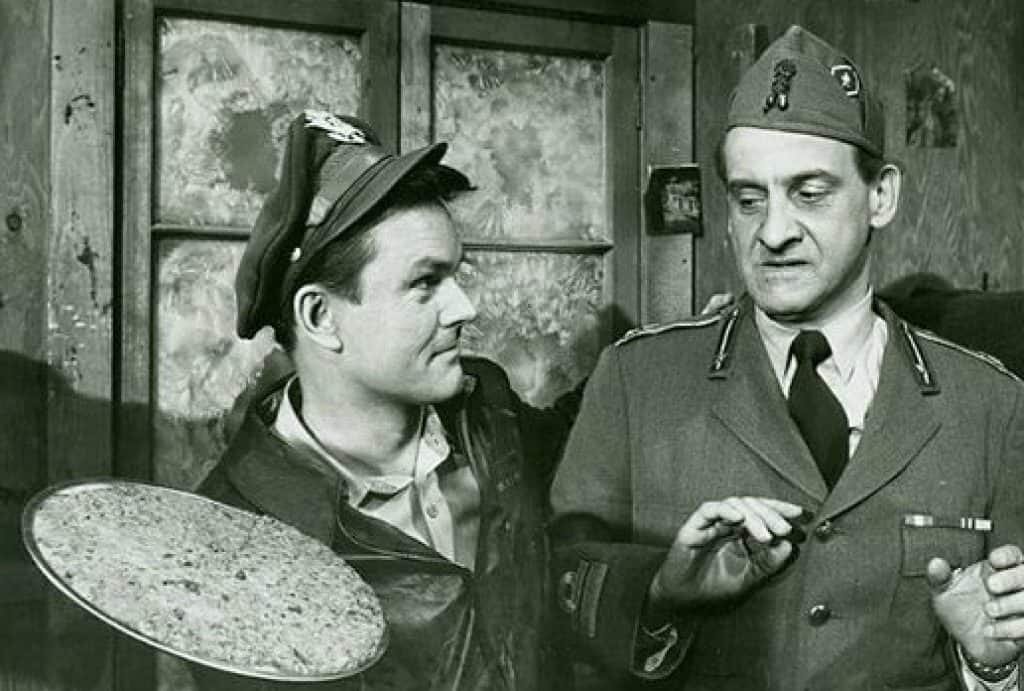 Bob Crane (left) on the set of “Hogan’s Heroes.”

Bob Crane had left his wife of more than 20 years for his co-star Sigrid Valdis. He appears to have had a taste for promiscuous sex and filming it, and people say he was a serious sex addict. After Hogan’s Heroes, he never found the same success. Instead, Crane took up small roles, took to the stage, and continued making home pornography.

Before becoming a television star, Bob Crane was a popular radio d.j. in Los Angeles. He worked with ultra-famous people like Marilyn Monroe before he himself became famous. Because of this, he was a lady magnet. He was never without a woman willing to sleep with him or have group sex with him and his friends. Whether they were all willing to be videotaped is not clear. Many of them later said that they had no idea he was filming or taking photographs. It was this ability to pick up women and his love of documenting it that led to his friendship with John Henry Carpenter.

John Henry Carpenter was an electronics whiz with the same sexual appetites as Bob. Together, they would pick up women and take them back to hotels, their homes, and other people’s homes, where they would engage in sexual acts and document it. There is no evidence that they were homosexual, but there were rumors that John wanted more from Bob than he was willing to give. Rumor has it that Bob told John he did not want to continue the friendship a few days (or the day) before his murder. Carpenter denied it.

On June 28, 1978, Bob Crane was killed in the early hours of the morning. Someone came into his room at the Winfield Place Apartments in Scottsdale, Arizona, and beat him to death while he slept. He was hit in the head with a blunt object at least once but most likely twice. He never even had a chance to leave the bed. The killer also wrapped an electrical cord around his neck and tied it there. Some believe this was a message regarding Bob’s love of videotaping sex. Another interesting find was a bottle of scotch in the room. According to those who knew him, Bob did not drink scotch. There was no sign of a struggle and no sign of forced entry.

His Killer, His Friend

Given the clues at the scene, police believed that Bob knew his killer. It is possible that he let the killer in or that he left the door open for the killer. He may have even fallen asleep with the killer in the room. At the time, Crane was divorcing his wife Sigrid. He also may have had countless enemies in the form of jilted lovers, jealous husbands/boyfriends, and angry women who did not know they were videotaped by the star. The list of suspects could have been very long. However, there was no evidence that one of his lovers had anything to do with it. His wife also had an alibi. Sure, she could have hired someone, but someone he knew?

This left police with John Henry Carpenter. He and Bob Crane were inextricably linked in this sordid tale. John got a stream of lovers through his friendship with Crane. He had a lifestyle to lose if Crane was to sever their friendship. The problem with that is there is no evidence they had a falling out — or very little evidence. Police found it suspicious that John called the apartment while they were there — several times — and never asked why the police were in his friend’s apartment. That could be explained by John not wanting to implicate himself it had something to do with their pornography. Much more difficult to explain is blood found in John’s rental car that matched Bob’s blood type. The problem with that is there was no way to test the DNA at the time.

Over the years, John Carpenter was the main suspect in the case, but there was never enough to arrest him. Prosecutors decided to go with a picture of what could have been brain matter in Carpenter’s rental car in 1994. The picture did not hold up in court and he was acquitted. To this day, people wonder about John in this whodunit. There is no other person who draws as much suspicion in this case, but it could be that the possible list is simply too long and varied to pick one out of the myriad of people with a motive.  The question remains.  Who killed Bob Crane?