History of Pompeii: Its Rise, Decadent Heyday, and Destruction

Pompeii is located in the Campania region of Southern Italy, just east of Naples. It is now synonymous with the devastating disaster of 79 CE when the nearby volcano, Mount Vesuvius, erupted violently. However, the history of Pompeii as a lavish trade town dates many years back to the 8th century BCE. From its humble origins to its final burial under volcanic ash and stone, Pompeii reveals a story of its rise to fame through life, tragedy, and death. 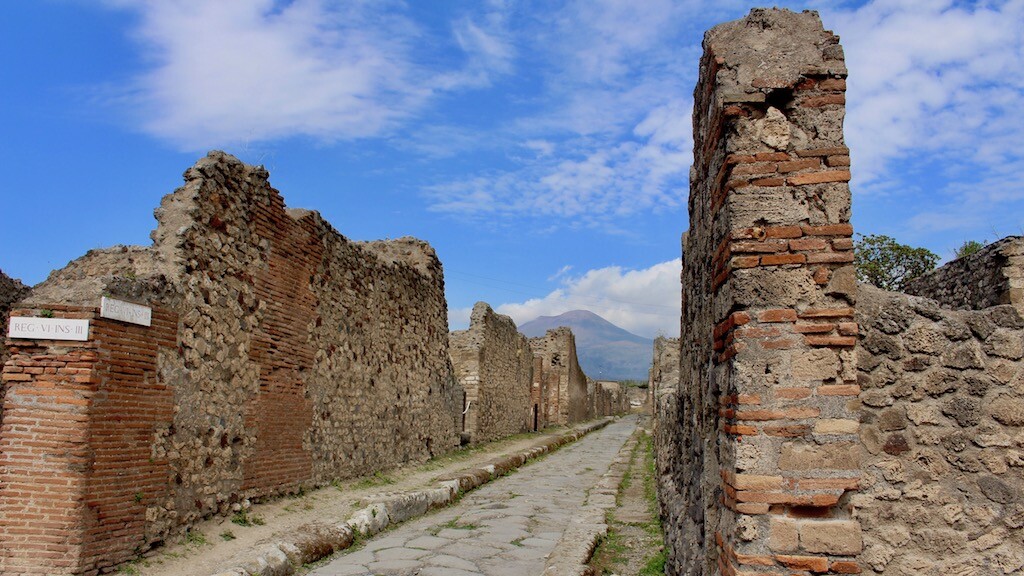 A street in Pompeii with a view of Vesuvius in the background. Photo: Historic Mysteries.

History of Pompeii in Pre-Roman Times

The Oscans founded Pompeii as early as the 7th or 8th century BCE. Once a coastal town with access to fresh water, the city held a prime location as a vibrant Mediterranean trade hub. During this period, Pompeii enjoyed steady growth over several centuries of massive prosperity. Therefore, the Greeks, Etruscans, and Samnites all wanted it for themselves.

Within just two centuries of development, officials of Pompeii allied with the powerful Greek Cumaeans from the shore west of Vesuvius. Control over the Mediterranean waters around Naples vacillated between the Etruscans and the Greeks, and the Etruscans successfully conquered Pompeii. The resort town remained under Etruscan control for 51 years until 474 BC when Greek forces liberated Pompeii at the Battle of Cumae.

Pompeii’s salvation was not to last indefinitely. The Samnites, an ancient south-central Italic group, took over the city. They maintained a stranglehold on Pompeii until Roman forces began a series of campaigns to seize control of Campania a whole. Ultimately, the Romans defeated the Samnites by the end of the Samnite Wars (343-290 BC).

The Last Samnite Sanctuary of Pietrabbondante

With the region now annexed to the growing imperial influence, Pompeii became an ally of Capitoline power. Such an alliance was a pivotal part of Pompeii’s increasing status as a significant hub of importance and development. In modern parlance, Pompeii effectively became a boomtown. 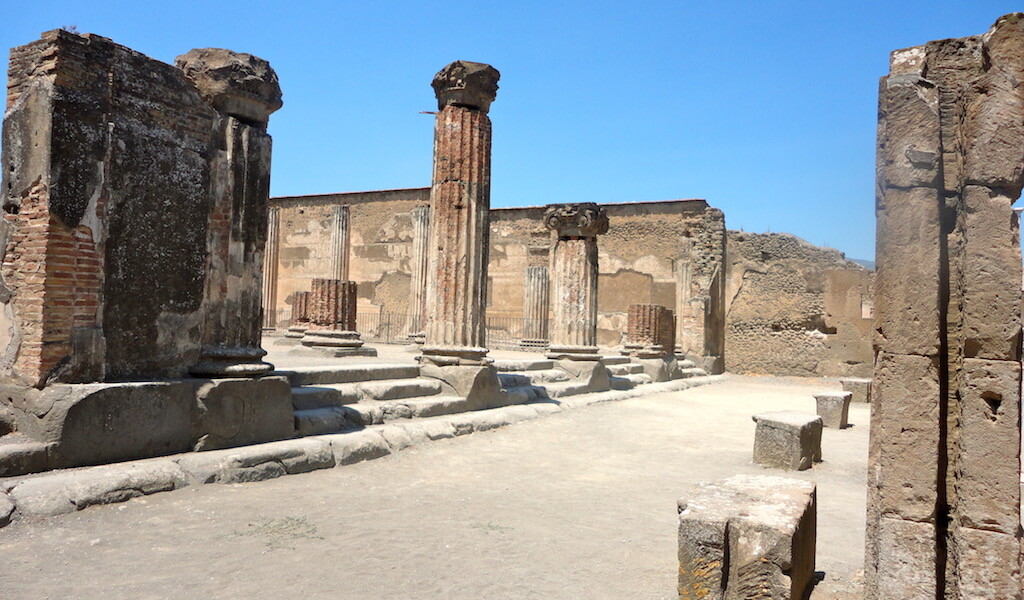 Remains of the basilica at Pompeii. Photo: Historic Mysteries.

Despite enjoying sustained growth under the Samnite occupation, Pompeii enjoyed even more prestige within Rome’s evergrowing empire. Even under Roman rule, the town retained its language and institutions, and the site’s urban expansion and grand architecture intensified.

Pompeiians Rebel Against the Romans

Over time, some of the citizens of Pompeii and adjacent towns grew more disillusioned living under the Roman regime. They organized a rebellion for independence during 91 BCE. However, they met with a ruthless and aggressive retaliation from Roman forces.

Rome’s legion, led by Silla, quickly thwarted this potential rebellion and crushed the uprising. Additionally, Rome implemented punishments, not only for Pompeii but also for any potential repeated threats. Rome stripped Pompeii of its independence and transformed the city into a Roman municipality. Pompeii adopted a new Roman name, Colonia Cornelia Veneria Pompeianorum.

Pompeii’s History of Trade and Business

Pompeii was a seaport that traded and transported goods and people. Typical trade items were wine, olive oil, pottery, and foods, such as nuts, grains, vegetables, fruits, lentils, chickpeas, and beans. Seafood also was abundant. Exports also included garum, a fish sauce used as a topping. Additionally, there was a slave trade, as slaves made up almost the entire lower working class of Pompeii.

Merchants, mariners, and tourists of all persuasions visited from faraway lands and brought lots of wealth with them. Pompeii offered luxurious accommodations and earthly pleasures beyond imagination at a variety of brothels staffed with slaves.

Various shops, homes, and food and drink taverns, or tabernae, lined the cobblestone streets. Bakeries scattered across the city of Pompeii fulfilled the vast demand for bread, one of the main staples of the region. These structures still exist at Pompeii today. 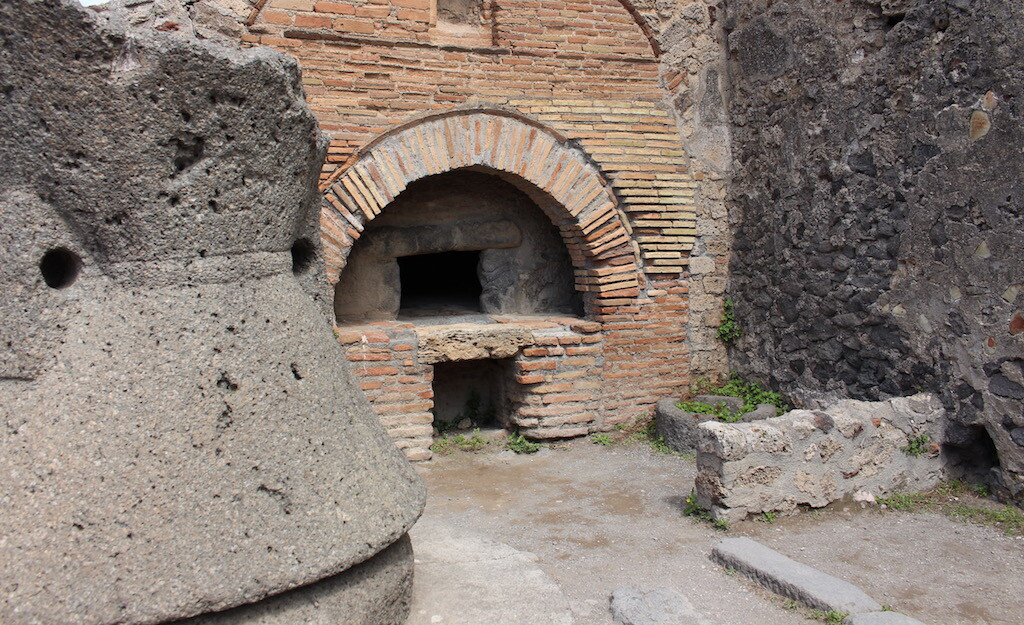 The Beginning of the Fall of Pompeii

In 62 CE, a huge seismic impact hit much of the Campania region. It caused widespread damage to Pompeii and the nearby resort town of Herculaneum. Nonetheless, residents were eager to rebuild, and their recovery efforts began a slow restoration of the city structures and monuments.

Another smaller quake hit in 64 at the moment Nero was performing in a theater in Naples. Over the next decade and a half, Pompeiians reconstructed much of the town’s beauty and glamour. But residents of Pompeii and the surrounding countryside had no idea that they were living next to a ticking timebomb. Vesuvius had not erupted for hundreds of years. Little did they realize that behind what appeared to be a tranquil mountain lay a deadly fury.

Day of the Pompeii Eruption

Experts once believed that the eruption date was August 24. But recent revelations caused many experts to shift that to October 24. Regardless, in 79 CE, when Vesuvius announced her arrival to Pompeii, at most of the city was ready.

Most of the 20,000 residents heeded the warning signs and fled town. Those who remained, about 2,000, did so at their own risk. They were either unwilling or unable to take the necessary steps to save themselves.

Vesuvius’ assault upon Pompeii and its neighbors occurred in waves. Earthquakes rumbled the port town for four days before the eruption. However, Pliny the Younger, who observed the catastrophe from across the bay, said that the people were not concerned as they were accustomed to the tremors.

Small eruptions probably began in the morning. Then at around 1 pm, more significant eruptions started spewing ash, gas, and steam high into the air, forming a column over nine miles high. By nightfall, the column fell hot and fast in the form of a pyroclastic flow. At more than 1,000 degrees Fahrenheit, this flow inundated the nearby town of Herculaneum with hot poisonous gases swiftly killing residents like an assassin. The fumes asphyxiated them while the heat burned their bodies. (Henrik). 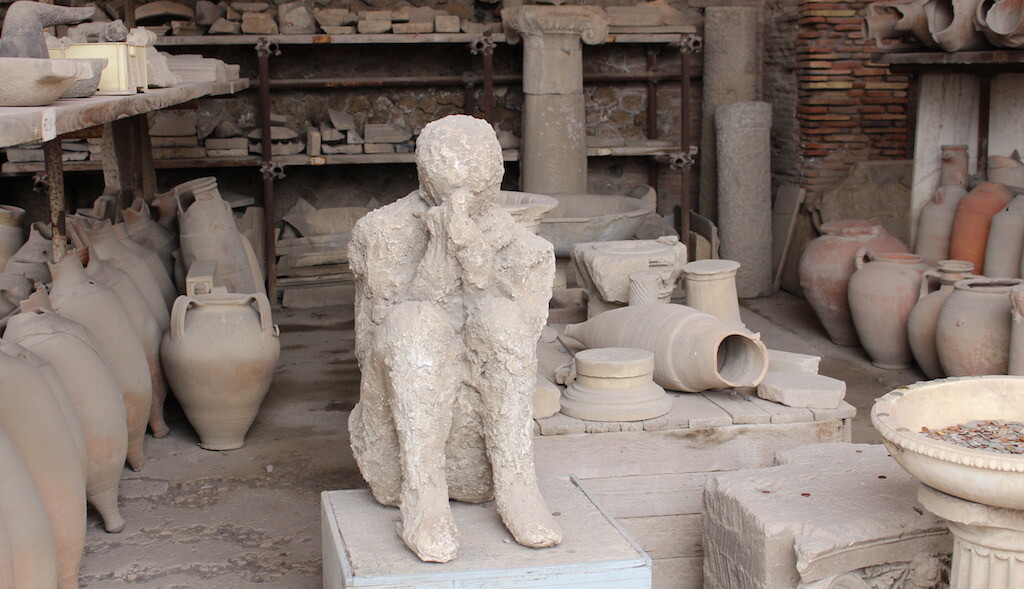 A man who appears to be covering his face died in the eruption of 79. Photo: Historic Mysteries.

For six hours, the primary eruption rose 20 miles into the atmosphere. It came down in a pyroclastic flow that burned and suffocated Pompeiians. More pumice and ash fell, and violent blasts continued for 30 hours in total. In the end, Vesuvius didn’t just bury Pompeii beneath meters of sediment. It wiped the once-bustling seaport from the face of the earth.

Meanwhile, Pliny the Younger, safe across the bay in Misenum, watched as Vesuvius blew. He was unable to do anything as Pliny the Elder took a boat and headed across the Bay of Naples directly towards the devastation to help those trying to escape. Pliny the Younger was later informed that his father was among the many casualties.

Rediscovery of the City

The initial rediscovery of the ruins was by chance. Deep into the 18th century, a local farmer was digging away on his land when he came across a cavern. The unnamed man had opened a window into Pompeii.

The Ancient Village and Tombs Buried in Gricignano, Campania, Italy

After the magnificent find, archaeologists organized the first coordinated excavation in 1748. Under the lead of Charles of Bourbon (Carlo di Borbone), these digs adhered to the strictest of scientific methods. The painstaking process of uncovering the history of Pompeii has been conducted ever since on an ongoing basis.

Archaeologists have unearthed 60 hectares of the city in the years since its initial discovery. Among the artifacts that have surfaced to date include entire villas, mosaics, pottery, frescoes, temples, shops, and art. 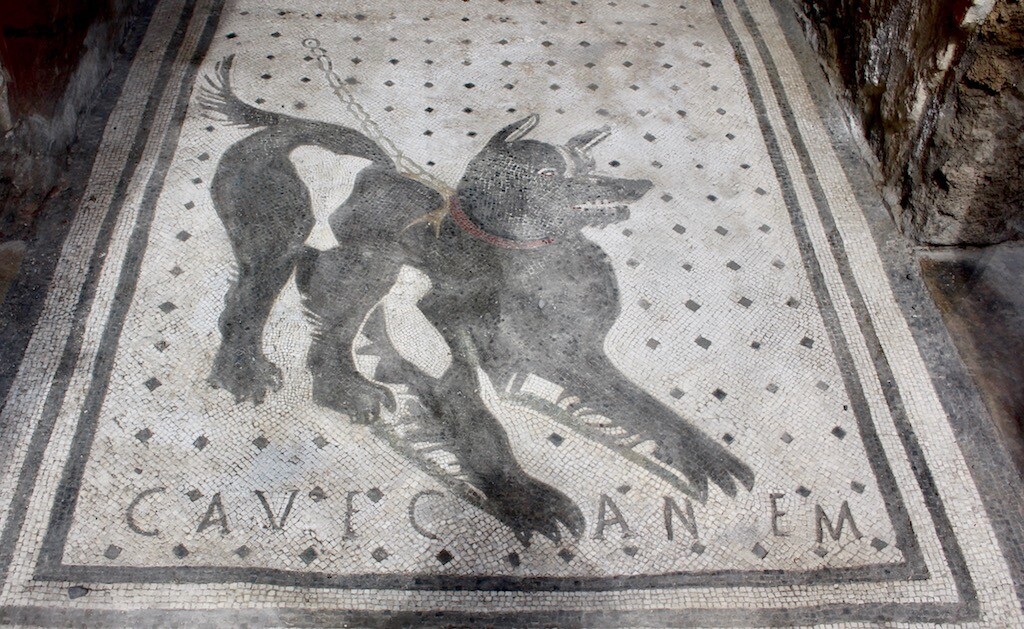 This dog mosaic sits at the entrance of a villa as a warning. Photo: Historic Mysteries.

Perhaps the most shocking discoveries are the 1,150 solidified remains of the 2,000 victims left in the city. Undoubtedly none instills more sadness than two people embracing. This pair had gambled on surviving the catastrophe with one another.

The Oracle at Delphi: An Age of the Prophetess

History of Pompeii Comes to Life

Each discovery brings the history of Pompeii to life and makes its journey and destruction tangible. We know more than ever before about the rise of Pompeii and how the local Oscan city grew into one of the principal seaports of the Mediterranean sea.

We have evidence that it was wealthy and opulent. But we also know of its darker, decadent side with brothels and the abundance of slaves. As fate would have it, the town would perish and lay buried beneath the cemented sediments of Vesuvius for roughly 1,700 years.

Today, the ruins of Pompeii attract global visitors who wander through its streets, learn about its history, and explore its villas.

Origin of Halloween from Samhain to Trick-or-Treat

Outrageous Astronomy – Who Was Behind The Great...