By now, most of you have either downloaded or are at least aware of Google Earth.  The program, which utilizes satellite imagery and aerial photographs to map the earth in amazing detail, can be used for a variety of reasons.  Some people use it to locate areas they have lived or traveled, while others use it to visit remote places of the planet that one would not otherwise be able to see.  I belong to this group, as I am sure many others are as well.  Google Earth is the perfect tool to explore and discover the physical remains of ancient cultures or unexplained anomalies found throughout this wonderful world.  Believe it or not, amazing discoveries have been found using this program.

In this article, I have identified ten mysterious places on Google Earth (in no particular order) that I have found quite fascinating.  In addition to the photographs imaged through Google Earth, I have also provided a brief description of the area and its actual coordinates so you can visit these strange and fascinating places yourself through Google Earth.  Please click these photos to see them in a larger size.

The Badlands Guardian was one of those mysterious places first discovered by Lynn Hickox utilizing the Google Earth program.  Although this area is a completely natural geological feature in southwest Alberta, Canada, one cannot help but notice the striking resemblance of a human head wearing his full native American headdress.  Some have also claimed that the figure appears to be wearing earphones, which is nothing more than a road leading to an oil well.  Even though this area is a natural formation, it is amazingly ironic to see these arid badlands formations resemble the fully detailed shape of the very same indigenous people that lived in these lands.

It doesn’t take long to discover an interesting find when using Google Earth to explore the shifting sands of Egypt. As you can see from this attached image, the angles and straight lines of what appears to be a fortification wall protecting smaller similar structures in the interior.  If you use Google Earth to explore the surrounding area, you can see additional suspected man-made ruins buried in the desert sand.  I am not sure if the ruins captioned in this photograph have been thoroughly explored, but experts do state only a fraction of ancient Egypt has been discovered.  Every year new tombs, structures, and even pyramids are rediscovered in this ancient land. 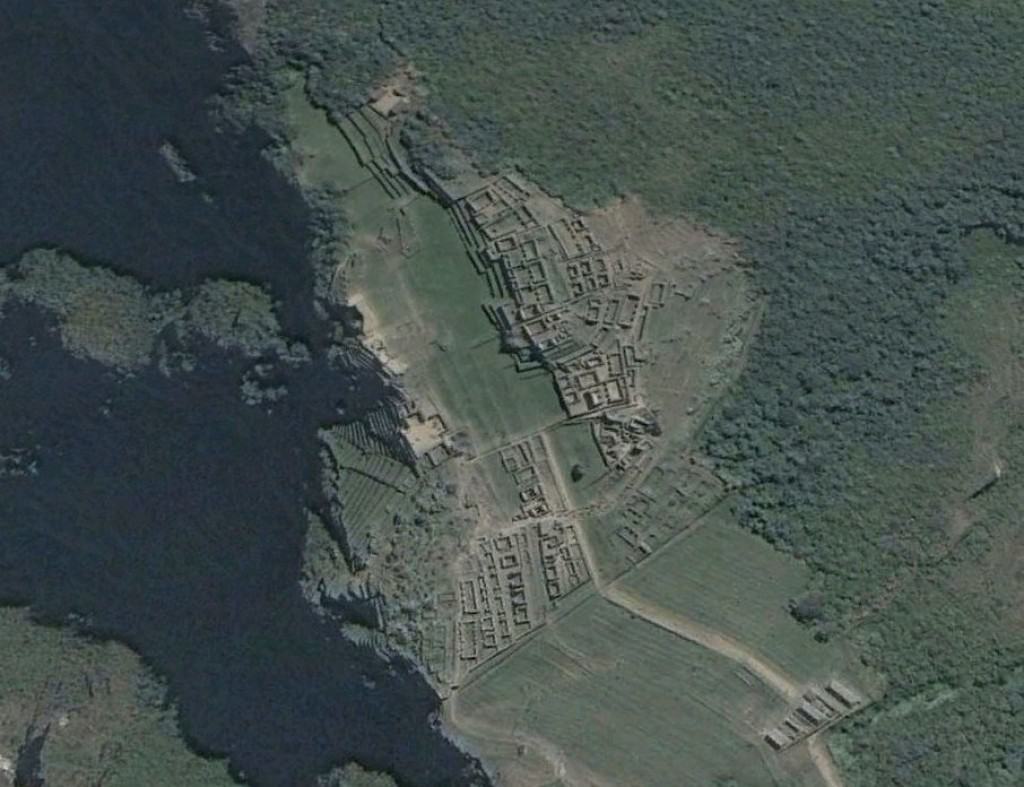 Located on a mountain ridge above the Urubamba Valley in Peru, Machu Picchu is considered one of the most mystical sites on our planet.  Machu Picchu is a pre-Columbian Inca site built around 1400 AD.  The area only thrived for 100 years and the place was abandoned following the Spanish conquest of the Inca empire in Peru.  Theories of its purpose range from it being the birthplace of the Incan“Virgins of the Suns”, an estate of the Incan emperor Pachacuti, a prison for the select few who commit extremely heinous crimes or as a settlement to control the economy of the conquered lands.  For more information on Machu Picchu, please see our article here.

The Nazca Hummingbird is only one of many designs and strange “airstrips” sketched across the Nazca desert of Peru.  These unusual man-made features were first discovered in the 1930s by passengers on aircraft flying over this vast desert on the way to other destinations.  The Nazca lines were created by brushing the reddish pebbles from the desert floor, which revealed the lighter colored sand underneath.  Due to the lack of rainfall and wind erosion, these lines and drawings have been preserved for centuries.  Their purpose remains uncertain, although one theory states the lines and drawings were created to help bring rain.  For more information on the Nazca Lines, please see our article here.

Chichén Itzá is an archaeological site built by the Mayan civilization located in the Yucatan peninsula of Mexico.  The translation of its name literally means “at the mouth of the well of the Itza”.  It was originally built around 600 AD and records indicate it fell around 1000 AD.  Although Chichén Itzá was no longer a flourishing city by the time the Spanish Conquistadors arrived, the Mayans managed to initially push back the Spanish invaders until it was eventually conquered.  The Spanish used the site as a cattle ranch in 1588 following the Mayan defeat.  Chichén Itzá had once been major economic power in the Mayan lowlands and archaeological work has recovered many fine examples of Mayan relics.

The Cerne Abbas Giant, also known as the “Rude Man” or the “Rude Giant” is a figure that stands 180 ft long and 167 ft wide.  It is carved in the hillside of Cerne Abbas, just north of Dorchester, England.  Its origin and date is unknown, although there are no records of this carved giant prior to the late 17th century.  Its purpose is also unknown, although most scholars tend to agree it is either a symbol of fertility or the representation of the Roman Heracles.  Cerne Abbas folklore claims the figure is the actual outline of a real giant that came from Denmark and was soundly defeated by the local villagers as he slept on the hill.  Although we may never know the real purpose of this carving on the hill, it is an important part of the local culture and re-chalked every 25 years to preserve its features.

There isn’t much information available on these strange, yet beautiful mosaic lines carved in the desert of the Gansu Sheng province in China.  Some records indicate they were created in 2004, but nothing that seems official.  Of note is that these lines are somewhat near the Mogao Caves, which is a World Heritage Site.  The lines span a very huge distance and yet still retain their linear proportions despite the curvature of the rough terrain.  Perhaps this is a military site to test kill probabilities of Chinese missile systems.  If utilizing Google Earth to view this feature, you will notice many questions from fellow Googlers wondering what this feature is and its intended purpose.

Chile’s Atacama Desert holds many examples of ancient Incan geoglyphs.  The Geoglyphs at Tiliviche is a fine example of a herd of llamas being moved by a thin person and a fat person.  The llamas are facing the ocean and may have been carved into the earth for the purpose of being a landmark for llama caravans coming down the mountain.  The llamas were as important to transportation for the ancient Incas as the camel was in the Egyptian desert.  These geoglyphs may be over 2,000 years old and usually found near trading routes.

Another example of ancient Incan geoglyphs in the Atacama desert of Chile is the geoglyphs of Chiza.  These geoglyphs are not too far away from the ones located at Tiliviche.  These designs are created by arranging large dark stones on the lighter sand.  These particular glyphs represent images of people, birds, and other animals.  What is remarkable about these Incan glyphs as opposed to the Nazca lines is that they are usually placed on hillsides and visible to people not only in the air but also on land.  This particular feature has a nearby road, and as you can see by the photo, someone has taken the opportunity to stop their vehicle and admire these amazing designs in such a dry desert.

Our last example of mysterious places found on Google Earth is also located in the Atacama desert of Chile.  The Atacama Giant is the largest prehistoric anthropomorphic figure in the world and measures 282 ft long.   Records indicate it was built around 1000 to 1400 CE.  Although some skeptics and “ancient aliens” believers think this is a representation of alien visitors who have visited the Incas, the Atacama Giant’s unusual features actually have a specific purpose.  Not only does this true giant represent the deity of the local people, but the various points around his head could tell the local inhabitants various calendar events such as the day and season and when to plant certain crops.  This was accomplished by how the moon would set in reference to these points.

Of course, there are many other mysterious places that can be visited in the comfort of your own home using Google Earth.  Stonehenge, the Pyramids of Giza and Nan Madol come to mind immediately.  As satellite imagery improves and our ability to peer into every corner of our ancient planet becomes more routine, many other strange and fascinating discoveries will surely emerge.