We never realized our Ten Mysterious Places on Google Earth would become so popular.  So we decided to expand the idea a little further.  We thought it would be a great idea to list the coordinates of some of the most interesting events in history.  Just copy the coordinates in our list below and paste them under the search bar of Google Earth.  If you don’t have Google Earth on your computer, you can download it here for free.   Once you’re ready to go, click on your Google Earth and join us in exploring ten Google Earth coordinates of historic events.

The British passenger liner RMS Titanic sank in the North Atlantic Ocean in the early hours of 15 April 1912.  The Titanic sank following a collision with an iceberg on her maiden voyage to New York City from Southampton, UK. More than 1,500 passengers lost their lives that morning.  The sinking of the Titanic is the seventh-largest maritime disaster in recorded history.  The coordinates above are the final resting place of the RMS Titanic.  The wreckage lies 12,000 ft below the surface. 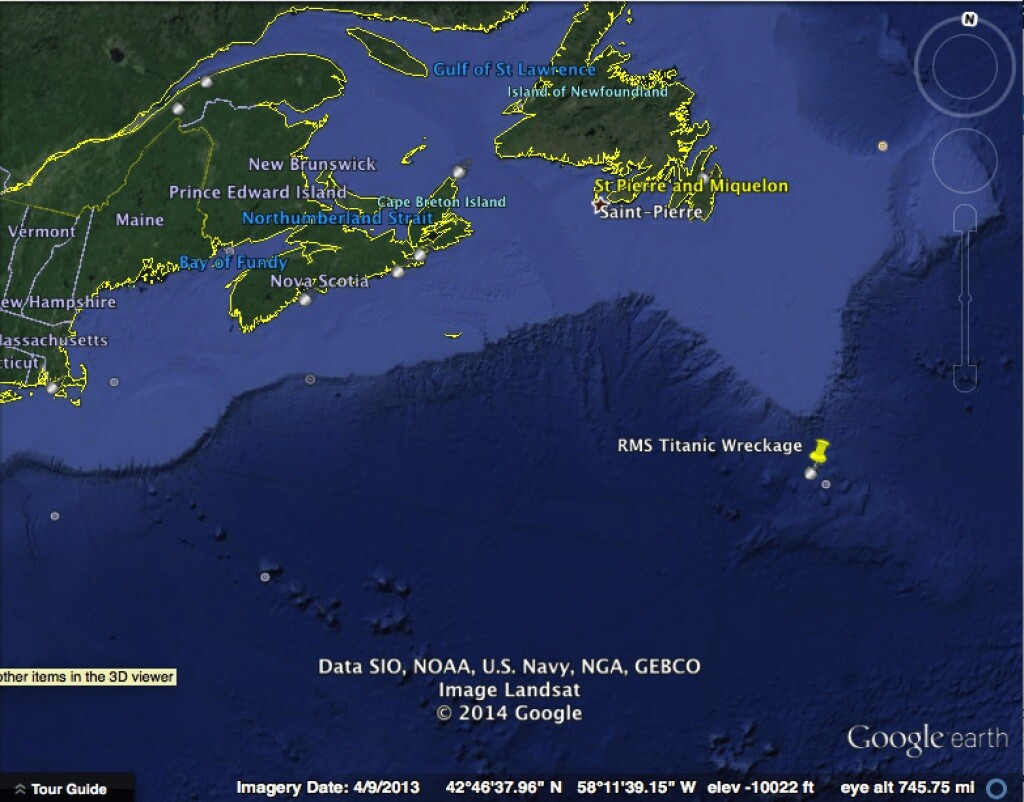 The sinking of the RMS Titanic was one of the largest maritime disasters in history.

On the morning of June 30, 1908, a tremendous shockwave centered around these coordinates shook Siberia and affected the entire world.  Atmospheric pressure in England jumped. For a few nights in parts of Europe, the sky was still bright enough to read the newspaper at night.  Trees were blown horizontally in a straight line away from the center of the event, except at ground zero, where the trees still stood vertically but branchless.  Various theories suggest this was caused by a meteorite, a comet, or natural gases.  The mystery continues today. 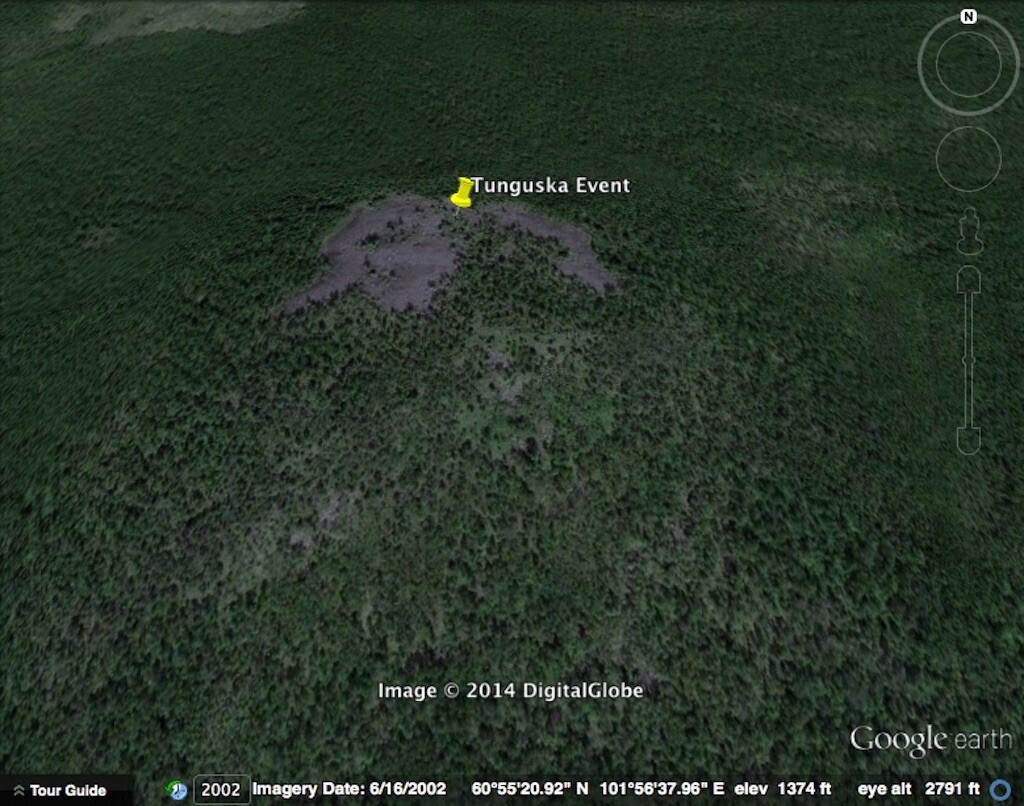 The mystery remains as to what caused the explosion known as the Tunguska Event.

Related: The Tunguska Event: A Cataclysmic Detonation Over Siberia 1908

On 18 November 1978, nearly 1,000 Americans died in a commune called Jonestown in Guyana, South America. The commune was established by The People’s Temple, a religious cult that established itself in Guyana to avoid the American press and authorities. This cult was led by a charismatic leader named Jim Jones. The massacre was a forced suicide that ended with all but five of the intended victims dead. It was the largest loss of American life in a deliberate act until the events of 9/11. When you think of cults, your first thought is probably Charles Manson and his “family.” Charles Manson and his cult members resided at the Spahn Ranch for most of 1968 and 1969. This is where they lived during the Tate-LaBianca murders which occurred on August 9th and 10th, 1969.  The ranch was used for western movies and is located in the mountains near Chatsworth, California.  Charles Manson and his family lived here for free in exchange for labor and household chores around the ranch.  A wildfire destroyed much of this ranch on 26 September 1970. 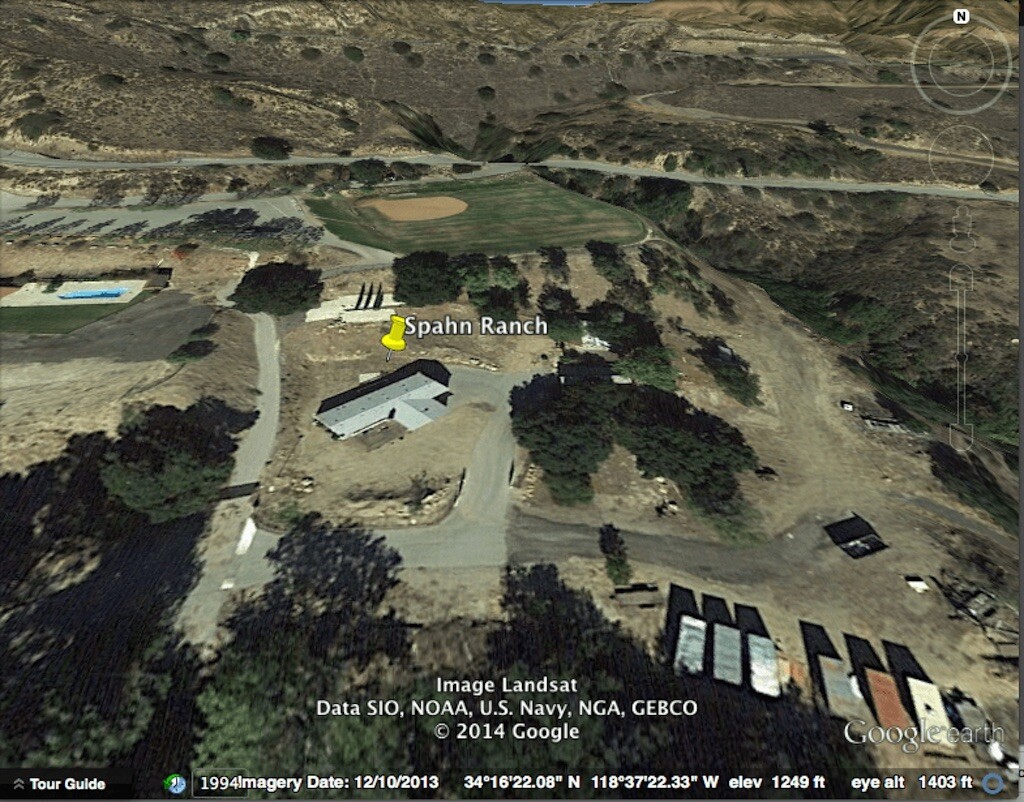 Spahn Ranch is the famous hideout of Charles Manson and his family during their infamous murder spree.

The Colossus of Rhodes no longer exists, but it was located at the coordinates listed above.  Nobody knows exactly what the colossus looked like, but it was widely regarded as a masterpiece by those who saw it.  The engineering and craftsmanship involved in its construction helped seal its place as one of the seven wonders of the ancient world.  The colossus is said to depict the Greek God Helios and stood a towering 98 ft tall.  It was one of the tallest statues in the ancient world.  Construction on the colossus began in 292 BC and work was completed in 280 BC.  The colossus greeted visiting ships for 54 years before it collapsed from a major earthquake in 226 BC.  Its remains lay in the rubble for 800 years before being scrapped and sold. 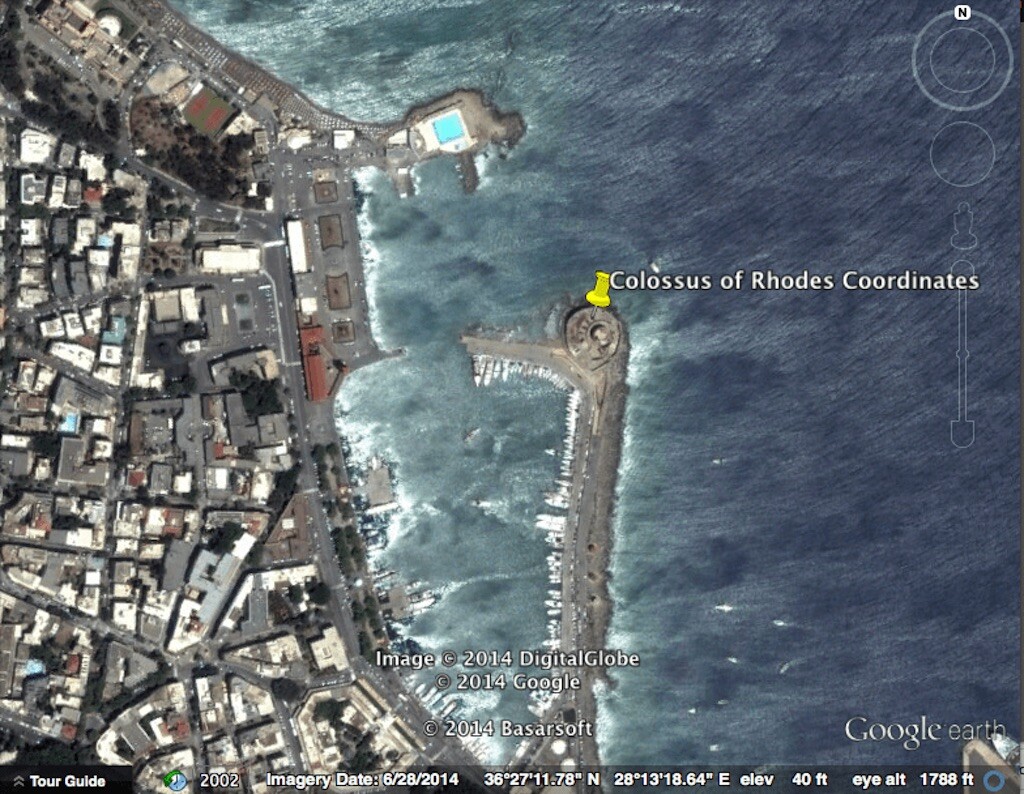 The Colossus of Rhodes was one of the seven wonders of the ancient world.

The Roanoke Colony was England’s first attempt at a settlement in America. The colony was established in 1587 and soon disappeared without a trace. The mystery of the lost colony of Roanoke Island has never been solved. The only clue as to what may have happened to the colonists are carvings in a remaining post and a tree. The post carving read “Croatoan” and the carving in the tree simply said “Cro.” These coordinates lead to the general area where the colony was believed to exist.

The colony was said to be on the north shore near a well-documented fort. But between 1851-1970, the north shore lost 928 feet of shore due to erosion. Considering that the shore had been eroding since 1587, any remaining evidence into what happened to the colony is most likely underwater. 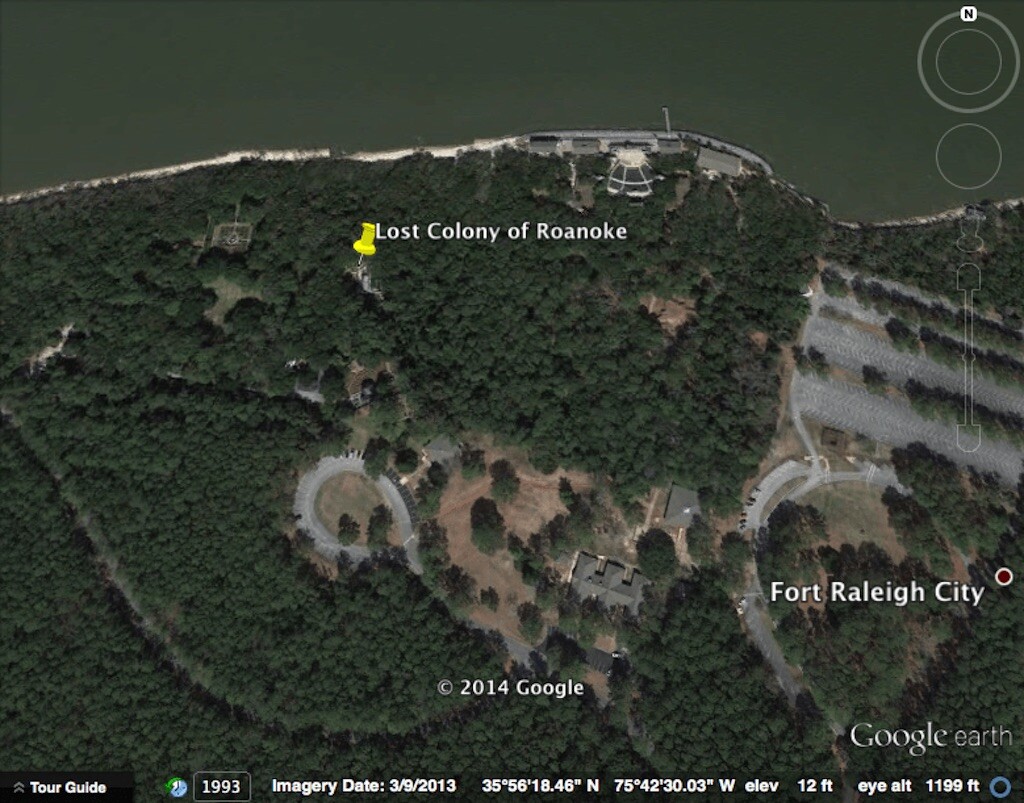 118 British settlers disappeared without a trace from the Roanoke colony.

The murder of Elizabeth Short in 1947 has intrigued, mystified, and even disgusted the city of Los Angeles for almost 70 years. Few unsolved murders have captured the public’s attention and imagination as that of “The Black Dahlia.” It’s not so much that she had been killed – but the way she had been killed that horrified the nation. To this day, her gruesome, violent murder remains unsolved and stands as one of the most celebrated murder investigations in American history.  According to the coroner, the murder scene was 54 feet north of the fire hydrant located in front of 3831 South Norton Avenue. 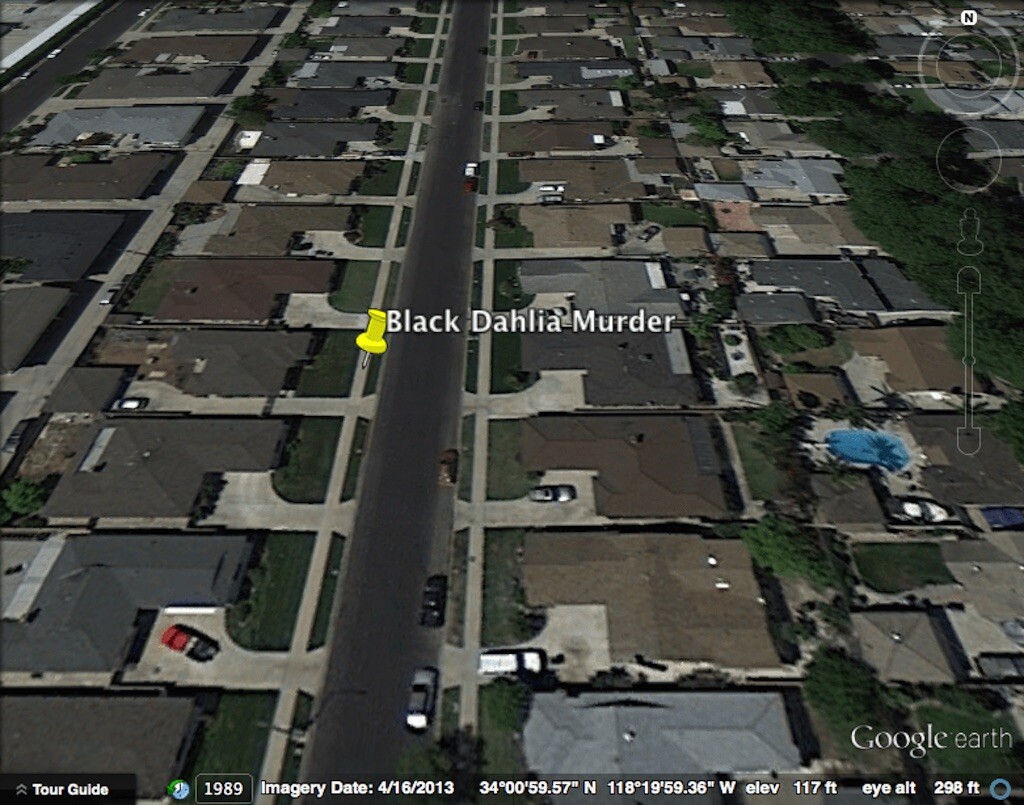 The body of Elizabeth Short, also known as the Black Dahlia, was found here.

Ferdinand Magellan, a Portuguese explorer, sailed under the Spanish flag to the East Indies in 1519.  It would be the first time a European expedition sailed from the Atlantic Ocean and entered the Pacific through what is known today as the Straight of Magellan.  Unfortunately, Magellan never completed the journey home.  He was killed on 27 April 1521 fighting the Lapu-Lapu warriors of Mactan Island, Philippines.  The expedition continued without Magellan and would eventually be the first to circumnavigate the Earth. Only one of the five original ships returned to Spain in 1522.  Out of the original 237 sailors, only 18 survived the trip around the world. 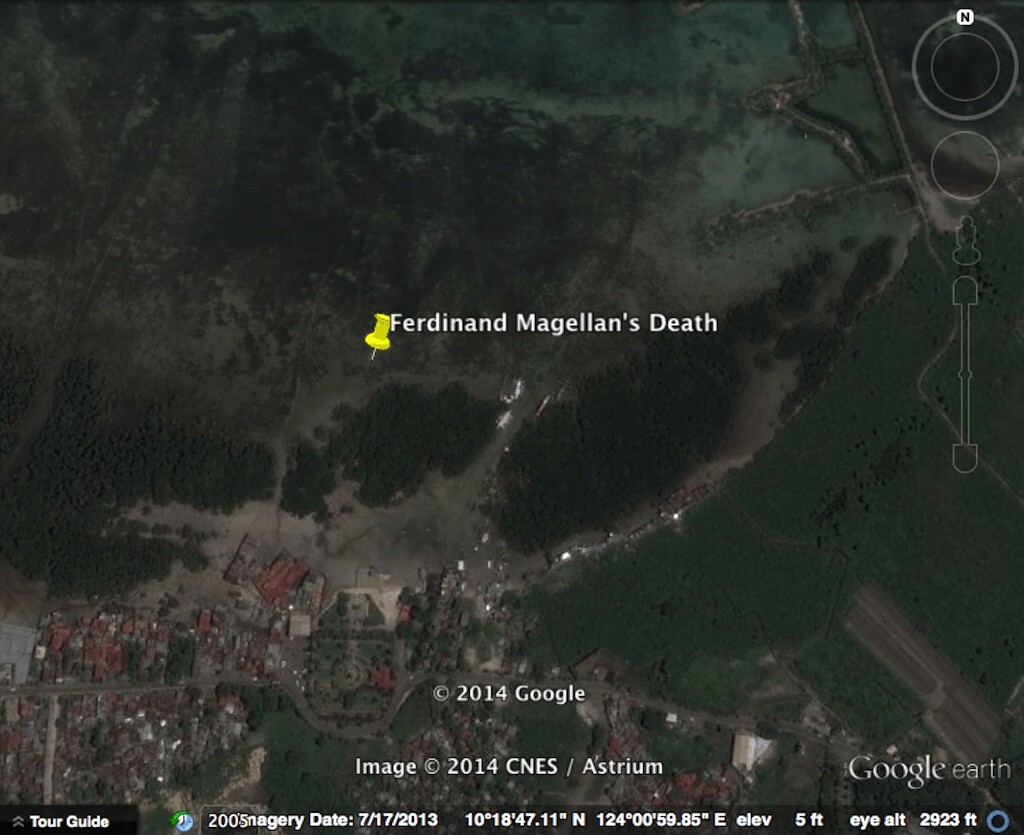 Portuguese explorer Ferdinand Magellan was killed here in the Battle of Mactan by Lapu Lapu Warriors in 1521.

The mutiny on the HMS Bounty is famous throughout the world. Captain Bligh, who commanded the HMS Bounty, set sail for Tahiti on 23 December 1787. The mission was to collect breadfruit and plant them in the West Indies. The HMS Bounty arrived in Tahiti on 26 October 1788 and 1,015 breadfruit plants were collected. Tahiti was a beautiful, enchanting island.

A toxic mixture of Captain Bligh’s harsh leadership and the enticing appeal of Tahitian women convinced some of the men, under the leadership of Acting Master Fletcher Christian, to commit mutiny on 28 April 1789. Fletcher Christian commandeered the HMS Bounty and eventually settled on an incorrectly charted island now known as Pitcairn. After unloading the Bounty, the mutineers set the ship on fire on 23 January 1790 to prevent it from being spotted from the sea. This location is called Bounty Bay. Following the mutiny, the HMS Bounty was scuttled here off Pitcairn Island.

Related: What Happened to Fletcher Christian

On 22 November 1963, President John F. Kennedy was assassinated at Dealey Plaza, Dallas, Texas.  Although the Warren Commission would rule that Lee Harvey Oswald was the man responsible for Kennedy’s death, many people doubt that he acted alone.  Conspiracies suggest the Italian mafia, CIA, the KGB, Vice President Lyndon B. Johnson, and pro-Castro groups may have played a role in this assassination.  If you look closely at the Google map above, the ‘X” painted on the road marks the exact location President Kennedy was shot. 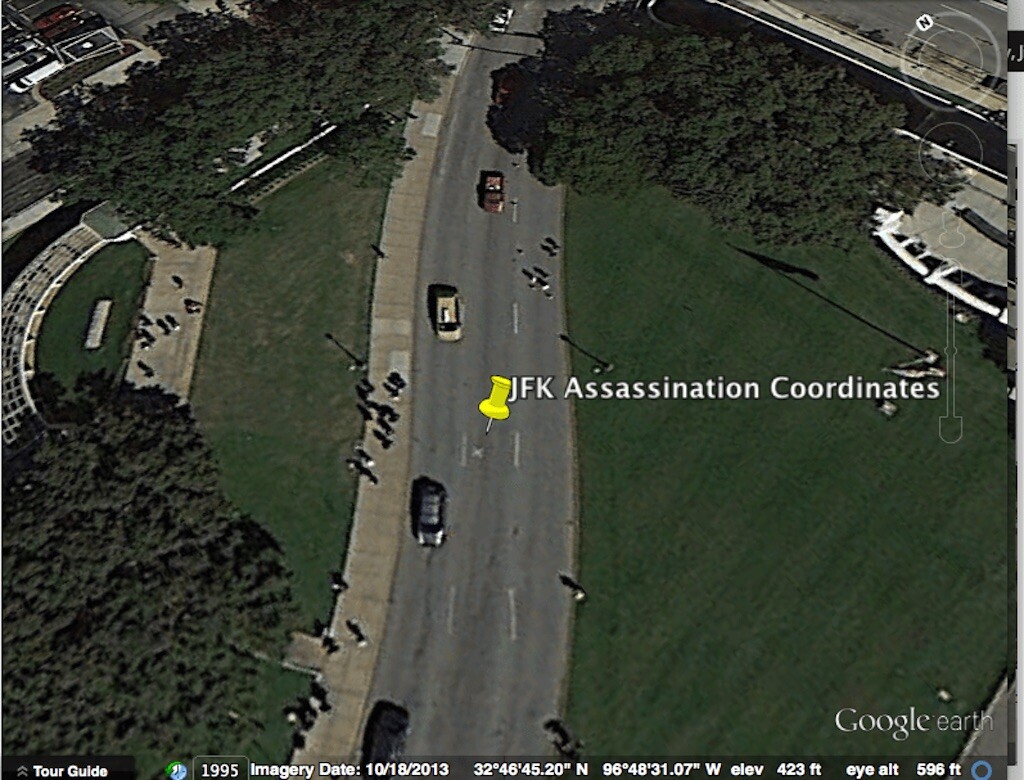 Related: Who was the Babushka Lady at JFK’s Assassination?

Obviously there are thousands upon thousands of historical events worthy of inclusion in this article.  Perhaps we can add supplemental editions over time.  Using Google Earth coordinates to view historic events can be entertaining and educational.  We hope you enjoyed our little tour around the world.

What coordinates would you have picked for this article?  Leave your suggestions in a comment below.  Perhaps we will include it in our next edition.
Share Your Thoughts